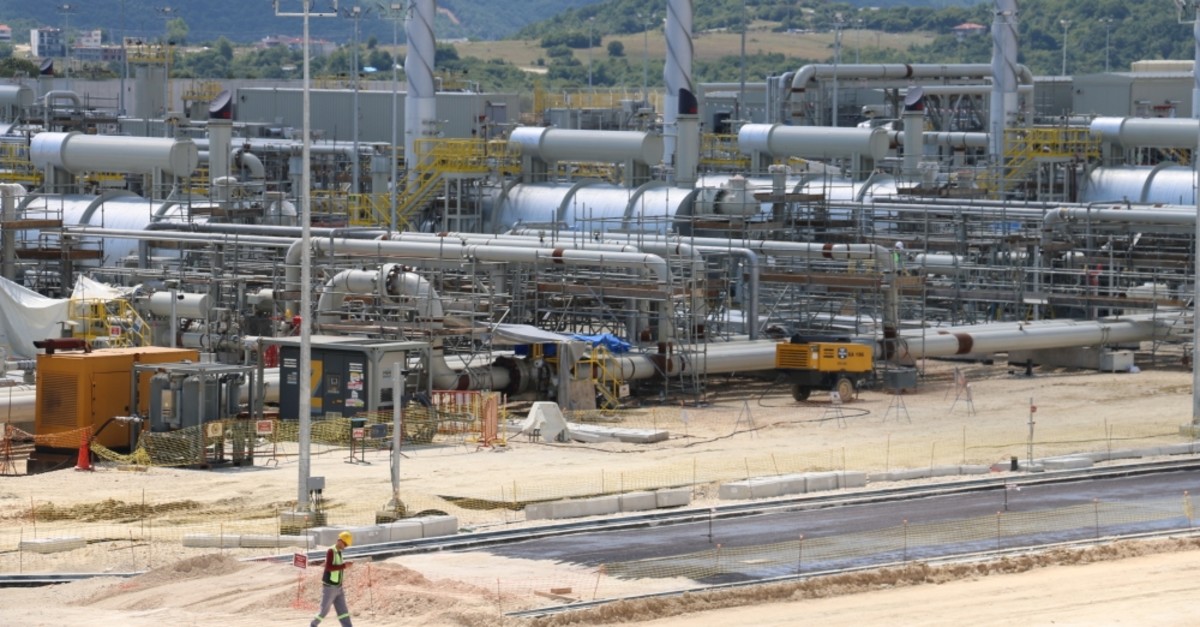 The Ku0131yu0131ku00f6y terminal construction, which will bring in Russian gas to Turkey via the TurkStream natural gas pipeline project, is 90% complete, ready to begin serving by the end of this year.
by Anadolu Agency Jul 25, 2019 12:12 am

The strategic natural gas pipeline project, TurkStream, is very close to completion and will be ready to deliver gas to the Turkish market by the end of this year

The epitome of Turkish-Russian energy cooperation, TurkStream marked a critical project development milestone with the 90% completion of all construction work at the Kıyıköy receiving terminal on the Turkish side where Russian gas will be transferred across the Black Sea to Turkey. "The landfall facilities in Russia stand at a 99% completion level, and both offshore pipelines connecting the two shores are fully complete. The construction of the offshore segment of the pipeline was completed in record time, which is a remarkable achievement for such a technically challenging project," Oleg Aksyutin, deputy chairman of the Gazprom management committee, the project's main partner company, and CEO of the TurkStream project company, told Anadolu Agency (AA) Wednesday.

The TurkStream project consists of two lines across the Black Sea, the first of which will serve Turkey with a capacity of 15.75 billion cubic meters, while the second line is planned to serve Europe.

Each pipeline is 930 kilometers in length, laid at depths reaching 2,200 meters. Of the two onshore lines, Turkey's state-owned oil and gas trading company, the Petroleum Pipeline Corporation (BOTAŞ), is constructing the onshore line to connect to the Turkish grid and a BOTAŞ-Gazprom joint venture is building the second line toward Europe.

The project is the biggest-diameter offshore gas pipeline in the world laid at such depths. The world's biggest construction vessel, the Pioneering Spirit, carried out the deep-sea pipe laying.

The Kıyıköy receiving terminal, located approximately 100 kilometers west of Istanbul, is one of the two receiving terminals, located on the Turkish side, while the other facility is located in Anapa, a port town on the Russian Black Sea coast.

"We have full confidence that the TurkStream pipeline will be ready for gas deliveries by the end of December, and serve to ensure supply security for Turkey and Europe and bolster Turkish-Russian cooperation for generations to come," Aksyutin said.

"The construction progress on the Turkish landfall has been on schedule, as well as in compliance with strict safety, social and environmental standards," he added.

"Within the framework of the offshore section of the TurkStream project, approximately 1,860 kilometers of pipe have been laid under the sea for the two pipelines. The construction process for the onshore sections of the project in Turkey and Russia is also almost complete," said Aslı Esen, deputy head of communications and spokeswoman for the project.

"The Russia, the Black Sea and Turkey sections of the project are fully integrated now. Once the construction of the receiving terminal in Kıyıköy and the testing processes are finished, the project will be entirely complete," she said.

She added that all environmental measures were meticulously implemented, and at the current stage of progress, the shore crossing section and the pipeline route from the shore to the terminal has already had trees replanted for environmental reclamation.

"Areas reserved for temporary use such as the construction site will be delivered to the General Directorate of Forestry for reforestation once the topsoil is restored. For tree loss compensation in areas of permanent use, a protocol signed with BOTAŞ and the Forestry Directorate ensures that five trees are replanted for every tree lost with the provision of five-year maintenance," she said.

The head of construction for the receiving terminal, Erol Yazıcı, said, "The TurkStream receiving terminal is equipped with safety measures far exceeding those of other existing gas facilities around the world."

"The operational pressure of the TurkStream pipeline is 283 bar, but we are testing the system with a pressure up to 428 bar. Every single pipe, valve and cable used in the project is repeatedly subjected to tests. The cleaning and testing processes of the underwater pipes are complete," he said.

He added that hydraulic tests, conducted by filling the pipelines with water, are about to be completed. Upon completion, leak tests with nitrogen and helium will be undertaken followed by operational tests with natural gas.

"In parallel with the tests, mini robots inspect and clean the piping within the receiving terminal," he added.

"Besides the pipes for the onshore and offshore sections, we have carried out 22 kilometers of piping and 915 kilometers of cabling within the receiving terminal in Turkey," Tarkan Resuloğlu, the deputy head of construction, explained.

"The receiving terminal is specially equipped to ensure uninterrupted operation. As the [pipeline] system is designed for Turkey, the gas coming from Russia will be adjusted to the required heat and pressure conditions and delivered to BOTAŞ," he added.