All parties should cooperate with Turkey in Eastern Mediterranean, FM Çavuşoğlu says 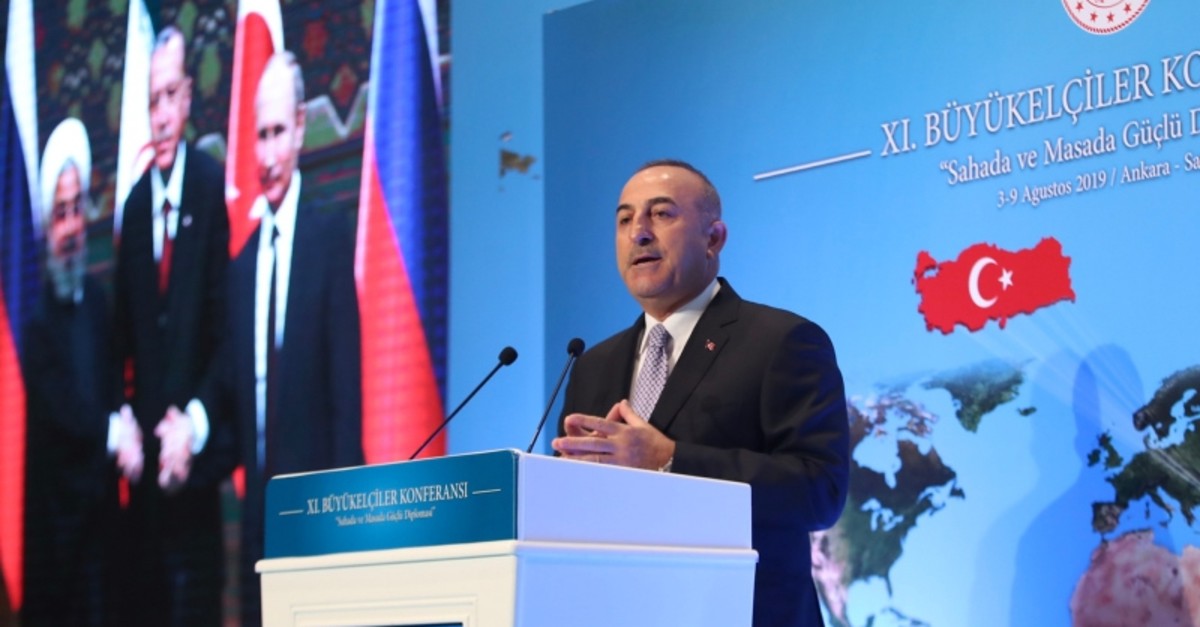 Turkey will continue to defend Turkish interests in the Eastern Mediterranean and all parties interested in the region should cooperate with Ankara, Foreign Minister Mevlüt Çavuşoğlu said Monday.

Speaking at the 11th Ambassadors' Conference, Çavuşoğlu said Turkey was in favor of cooperation and equal distribution of natural resources in the area but warned that Ankara would stop any moves against Turkish interests.

"We won't allow any moves that disregard the legitimate interests and rights of Turkish or Turkish Cypriot people in the Eastern Mediterranean," he said.

The minister also warned the European Union not to act as an arbitrator in an issue such as maritime jurisdiction, adding that Ankara would not respect sanctions imposed by Brussels.

Speaking about intensifying attacks by the Assad regime and its allies on Syria's Idlib, Çavuşoğlu said any possible humanitarian crisis in the area would overshadow the ones the world witnessed in 2015, when European nations buckled under pressure after facing wave after wave of migrants.

"We did everything we could to stop the regime and its allies' attacks on Idlib. We call on the world to support our efforts, or else there will be a humanitarian crisis that overshadows the ones in 2015," he said.

Turkey and Russia agreed last September to turn Idlib into a de-escalation zone in which acts of aggression are expressly prohibited. The Syrian regime, however, has consistently broken the terms of the cease-fire, launching frequent attacks inside the designated zone.

More than 400 civilians have been confirmed killed in the escalation of violence in northwestern Syria over the last three months and more than 440,000 displaced, according to the U.N.

Regarding developments in the Palestinian-Israeli conflict, Çavuşoğlu said Turkey would continue to support the Palestinian cause no matter what and added that Turkey was striving to achieve sustainable peace and development in its surrounding areas.

On Turkey's war on terror, Çavuşoğlu said Turkey expects cooperation from its allies in dealing with its adversaries.

"We continue our fight against Gülenist Terror Group (FETÖ). FETÖ-linked schools have been shut down in 22 countries. We are tracking them down and seizing their means," he said.

The relation between the U.S. and the PKK's Syrian offshoot has long been a concern for Turkey as the terrorist group's presence on the Turkish border poses grave security threats to the country's national security.

During the fight against Daesh, the U.S. opted for partnering with the YPG despite its NATO ally's security concerns, and provided truckloads of weapons to the terrorist group. Some 22,000 truckloads of arms and ammunition have been given to the YPG so far.

The PKK – considered a terrorist organization by the U.S., Turkey and the E.U. – has waged an insurgency against the Turkish state since 1984. In its more than 30-year terror campaign against Turkey, the PKK has been responsible for the deaths of some 40,000 people, including many women and children.