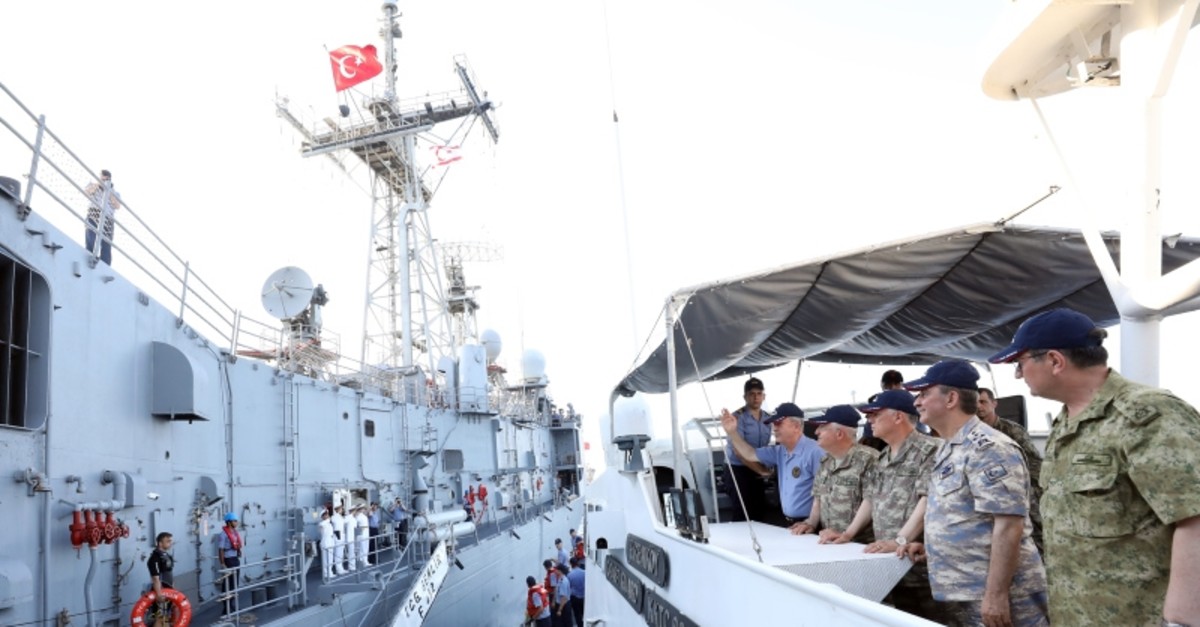 Turkey will not let a fait accompli in the Eastern Mediterranean, Aegean, and Cyprus, the nation's defense minister said on Sunday.

"We have defended the rights of our own, and the people of Turkish Republic of Northern Cyprus (TRNC) to the end and will continue [to defend]. Nobody should test our strength," Akar said.

"We won't turn a blind eye to a fait accompli in Cyprus, the Eastern Mediterranean, and the Aegean… We won't let any decision against our rights over this issue to be taken in any way," Turkey's defense chief reiterated.

"One should expect this: they [Greek Cypriot administration] will do exploration, drilling, extract gas and oil and benefit from these while the people of Cyprus, the state of the Republic of Turkey and 82 million will stand idly by. This is ridiculous."

Akar on Saturday arrived the TRNC to inspect Turkish troops stationed on the island and to hold a series of talks with the Turkish Cypriot officials accompanied.

Earlier on Sunday, Akar and top commanders performed their prayers for Muslim festival of Qurban Bayram (Feast of the Sacrifice), also known as Eid al-Adha, at the Hala Sultan Mosque near Nicosia (Lefkoşa) and exchanged bayram greetings with Cypriot Turks.

"Now, Fatih, Yavuz, and Barbaros drilling vessels are in the region. Oruç Reis [exploration vessel] is sailing to the region. Our determination at this point is extremely certain," Oktay told reporters following the Eid al-Adha prayer in Istanbul.

"Without any hesitation, Turkey will continue to defend rights of its own and Turkish Cypriots," he said.

Turkey will maintain its commitment to continue drilling activities and equal and fair sharing of resources by Turkish Cypriots, he added.

Oktay also reiterated that the drilling activities are being held in Turkey's own continental shelf and within the framework of an agreement with the TRNC.

The U.N. Secretary-General Antonio Guterres welcomed a proposal by Turkish Cypriot leader on administration of hydrocarbon resources, according to the TRNC presidency on Saturday.

Guterres said in a letter to Akıncı that all moves to ease tensions are welcomed, the presidency said in a written statement.

Guterres stressed that he believed the need for a solution of the hydrocarbon problem in the open seas is a strong incentive for a lasting solution on Cyprus.

He also appreciated Akıncı's commitment to a lasting solution on the island and his efforts to take more confidence building measures.

Akıncı's proposal was rejected by the Greek Cypriot parties.

Turkey has consistently contested the Greek Cypriot Administration's unilateral drilling in the Eastern Mediterranean, saying Turkish Cypriots also have rights to the resources in the area. The unilaterally declared exclusive economic zone of the Greek Cypriot Administration violates part of Turkey's shelf, particularly in Blocks 1, 4, 5, 6 and 7.