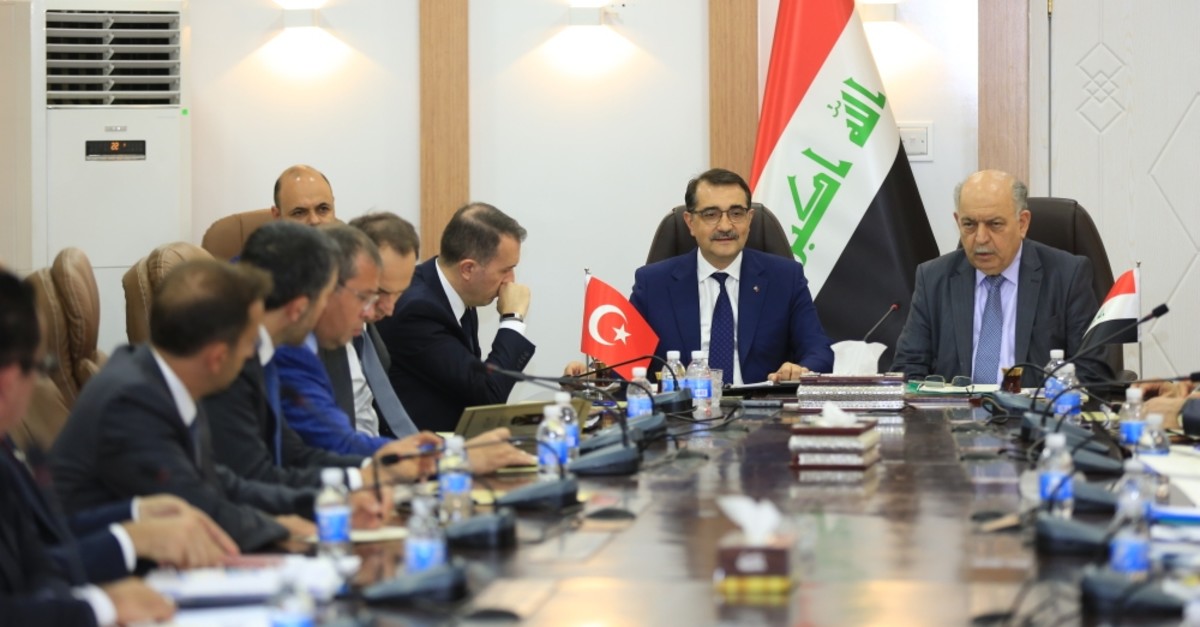 A new oil pipeline that will carry Iraqi crude to Turkey and overseas markets is on the common agenda of Ankara and Baghdad as the existing pipeline has been severely damaged by sabotage. Turkey's crude imports from its neighbor have significantly risen due to sanctions on Iran

Turkey and Iraq discussed the construction of a new oil pipeline to run parallel with the existing Iraq-Turkey oil pipeline, also known as the Kirkuk-Ceyhan pipeline, during a meeting between Turkey's energy and natural resources minister and Iraq's oil minister in Baghdad yesterday.

Dönmez said that oil produced in the north of Iraq could be transited securely and speedily via an Iraq-Turkey oil pipeline to global markets while also opening up new markets, particularly in the Mediterranean, through the Ceyhan terminal located in Turkey's Mediterranean region. "The Iraq-Turkey oil pipeline is in a position to take on the big task of carrying oil resources not only in the north of Iraq but also to other regions in the market. They [Iraq officials] spoke about new projects and we welcome them," Dönmez said.

He asserted that the Turkey-Iraq partnership, which is already well-established in various areas, could be further built on for electricity. "There was a limited amount of trade between Turkey and Iraq in electricity. We want to further expand this trade. As Turkey, we are ready to provide the necessary support for Iraq's electricity infrastructure, including in construction and equipment," he said.

The construction of a new electricity line will be further discussed between Turkey's energy minister and Iraq's Electricity Minister Luay al-Khateeb, Ghadhban said.

The existing Iraq-Turkey pipeline stretches almost 1,000 kilometers (621 miles) from Kirkuk to Turkey's southeastern port of Ceyhan in the Mediterranean Sea. However, Kirkuk portion of the pipeline had been severely damaged after being sabotaged by Daesh terrorists and it has not operated since March 2014.

Ghadhban said that the meeting held yesterday was a follow-up and evaluation of decisions taken at the meeting between Iraq's Prime Minister Adil Abdul-Mahdi, and an oil and gas committee with Turkey's President Recep Tayyip Erdoğan in May.

"During the meeting with Dönmez, we told the minister about the Iraqi Oil Ministry's intention to construct a new oil pipeline to carry Iraq's crude oil from Kirkuk to the Turkish border on the old route, with the Iraqi government's approval," he said.

This proposed oil pipeline is set to have the capacity to carry oil resources both from the north and south of Iraq and be linked to the Basra-Aqaba pipeline, according to Ghadhban.

The planned 1,700 kilometer-long Basra-Aqaba pipeline will transit oil from Iraq's southern city of Basra to the Jordanian port city of Aqaba on the Red Sea's Gulf, with a planned transfer capacity of 1 million barrels of oil per day. The project is awaiting approval from Iraq's Council of Ministers.

The Iraqi government continues to pressure Prime Minister Adel Abdul-Mahdi to push the Kurdish Regional Government (KRG) to deliver the allotted 250,000 barrels of oil per day to the State Organization for Marketing of Oil, per the 2019 federal budget law. Relations between the Iraqi federal government and the KRG had been sourced since September 2017 when the Kurdish community in the north held a referendum on Kurdish regional independence. Baghdad slashed a wide range of sanctions on the Kurdish autonomous government and seized control of the oil-rich Kirkuk province. Oil extraction and pumping from Iraq's northern Kirkuk province was suspended in October 2017 until Nov. 16, 2018, when Iraq's federal government and the KRG reached a tentative agreement to resume oil exports from Kirkuk to Ceyhan.

Following the U.S. decision not to extend temporary waivers provided for the main importers of Iranian crude oil in April, Turkey's crude imports from Iraq has surged.

According to data from Turkey's energy watchdog the Energy Market Regulatory Authority (EMRA), Turkey increased its oil imports from Iraq in December 2018 and January, when it bought 798,298 tons and 726,115 tons of crude from its southern neighbor, respectively. In November 2018, when the total crude imports were only 1.13 million tons, the country's top supplier was again Iraq with 321,859 tons. Iraq sold Turkey 528,983 tons of crude in February and 465,338 tons in March. In April, a total of 437.129 tons of crude bought from Iraq while total amount of imports were recorded at 2.3 million tons. As Turkey's crude imports soared in May to 2.6 million tons, the purchases from its southern neighbor jumped to 757.447, recording a 73% rise on a monthly basis.