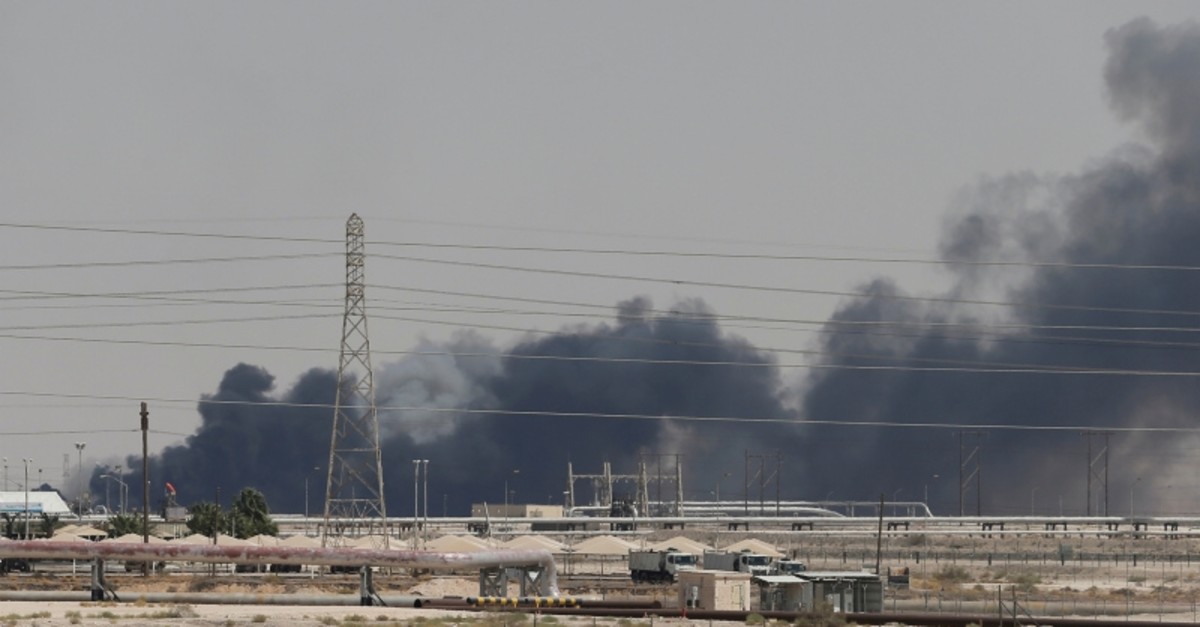 Smoke is seen following a fire at Aramco facility in the eastern city of Abqaiq, Saudi Arabia, September 14, 2019. (Reuters Photo)
by Compiled from Wire Services Sep 16, 2019 8:34 am

But after an initial spike, crude oil prices moderated as traders analyzed the likely longer-term implications.

Saudi Arabia is the world's biggest oil exporter and the attack on state-owned producer Saudi Aramco's crude processing facilities at Abqaiq and Khurais has cut output by 5.7 million barrels per day. The company has not given a timeline for the resumption of full output.

A source close to the matter told Reuters the return to full oil capacity could take "weeks, not days."

"We think the attacks would be a wake up call for investors, who have failed to price in risk within the price of crude. Although global supply will contract in the near term, the United States has the ability to supply this contraction," said Hue Frame, managing director at Frame Funds in Sydney.

Countries which are major importers of Saudi crude, such as India, China and Indonesia, will be the most vulnerable to the oil supply disruption, Frame said.

Saudi Arabia's oil exports will continue as normal this week as the kingdom taps into stocks from its large storage facilities, an industry source briefed on the developments told Reuters on Sunday.

"The attacks on critical Saudi oil infrastructure over the weekend are unlikely to reduce the kingdom's oil exports dramatically and the markets will likely look beyond short-term supply-demand dislocations," Barclays said on Monday.

"However, a re-pricing of supply-side tail risks will likely provide a more sustained boost to oil prices."

President Trump said he approved the release of oil from the U.S. Strategic Petroleum Reserve (SPR) if needed in a quantity to be determined.

Trump also said the United States was "locked and loaded" for a potential response to the attack on Saudi Arabia's oil facilities.

Meanwhile, South Korea said on Monday that it would consider releasing oil from its strategic oil reserves if circumstances around crude oil imports worsen in the wake of Saturday's attack on Saudi Arabia's oil facilities.

The attack on plants in the heartland of Saudi Arabia's oil industry, including the world's biggest petroleum-processing facility at Abqaiq, came from the direction of Iran, and cruise missiles may have been used, according to a senior U.S. official.

Saudi Arabia is set to become a significant buyer of refined products after the attacks, consultancy Energy Aspects said in a note.

Meanwhile, Saudi Aramco has told one Indian refinery there will be no immediate impact on oil supplies as it will deliver crude from other sources and has adequate inventory, a source with the refinery said.

Other Asian buyers such as Thailand have also said the attack would have no immediate impact on oil imports.