'Moves that undermine rights of Turkey, TRNC in East Med won't be tolerated' 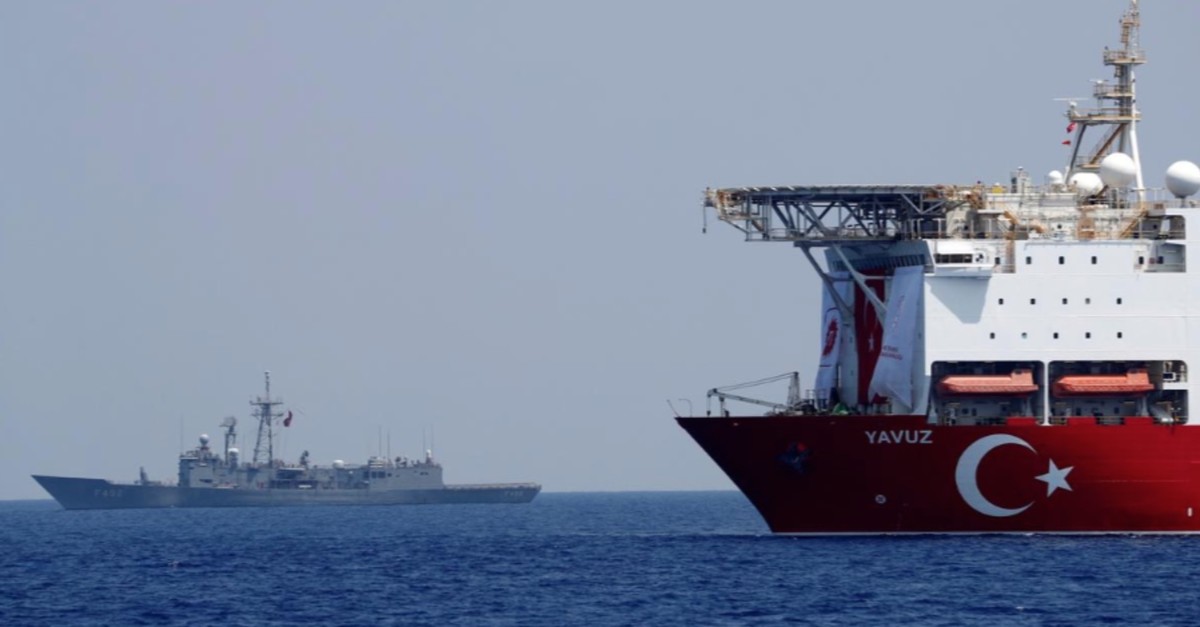 In light of the latest developments, Turkey has once again vowed it will not allow any effort that disregards its rights as well as the equal, inseparable rights and interests of Turkish Cypriots to the natural resources in and around the island. "Those who think that natural riches of the island of Cyprus and the region belong only to themselves will face the determination of Turkey and the Turkish Republic of Northern Cyprus (TRNC) in the future, as they do today," President Recep Tayyip Erdoğan said. Erdoğan's remarks came on Friday in a message he sent to a panel on Cyprus in the capital Ankara.

This was just days after recent reports on the Greek Cypriot administration's deals with French Total and Italian ENI for off-shore hydrocarbon exploration within the so-called license area number seven of the Exclusive Economic Zone (EEZ), which includes a section of Turkey's continental shelf.

Ankara on Thursday slammed the Greek Cyprus administration and warned it not to commission hydrocarbon exploration on the Turkish continental shelf in the Eastern Mediterranean.

"We repeat our strong warning that the unilateral acts of Greek Cyprus administration, which aim at usurping the rights of the Turkish Cypriots, do not contribute to peace and stability in the Eastern Mediterranean," Hami Aksoy, a spokesman for the Turkish Foreign Ministry, said in a statement.

Referring to reports, Aksoy said the Greek Cypriot side failed to understand Turkey's determination, despite warnings.

"As repeatedly underlined and shared with the international community, a section of the so-called license area number seven remains within the Turkish continental shelf, which has been registered with the United Nations," the Turkish official said.

He went on to say that Turkey in "no way will allow" any foreign country, company or vessel to conduct any unauthorized hydrocarbon exploration activities within its maritime jurisdiction areas, adding that his country will continue to take the "necessary measures" to protect its rights and interests.

"We once more advise the interested companies against any hydrocarbon activities to be attempted within the Turkish continental shelf, trusting null and void licenses issued by the Greek Cypriot administration," he added.

According to Turkey, the tension in the Eastern Mediterranean is based on the Greek Cypriot administration's unilateral actions that ignore the rights of the island's Turkish population.

The Greek Cypriots unilaterally declared a total of 13 so-called parcels in the Eastern Mediterranean as its EEZ and allowed international oil and drilling companies to operate in these areas, which are anticipated to hold rich hydrocarbon reserves.

However, the majority of these parcels clash with the EEZ declared by the TRNC, with the Greek Cypriot administration ignoring the fundamental rights of the TRNC to a share of the island's resources.

Turkey, which is also authorized by the TRNC, is currently running hydrocarbon exploration activities in the Eastern Mediterranean with its drilling vessels, the Fatih and Yavuz. In addition, the country's two other seismic vessels operate in the same region.

"We are defending the rights of Turkish Cypriots in the island and Eastern Mediterranean with the same determination we defend our own interests as Turkey," Erdoğan said further in his message on Friday.

"We are currently carrying out the hydrocarbon exploration activities that we started in the Eastern Mediterranean with our Cypriot brothers with two drilling and two seismic exploration vessels. The elements of our naval and air forces are also on duty for these ships to operate safely.

In his address at the meeting in Ankara, Vice President Fuat Oktay also iterated that Turkey will not allow Greek Cypriots to violate the rights of Turkish Cypriots with regard to their official status and the exploration of natural resources. "Nobody can consider giving minority status to Turkish Cypriots, who are common owners of the island," Oktay said, adding that the Turkish Cypriots will not accept such status.

He also emphasized that that they will not turn a blind eye to the initiative of the Greek Cypriot side, which, the vice president stressed, thinks it is the sole owner of natural resources on the continental shelf of the Island.

Also speaking at an event on Friday, Hasan Taçoy, the TRNC's minister for economy and energy, said they are planning to construct an interconnected power system to the TRNC from Turkey.

He noted TRNC is not alone in its fight to protect its rights and interests to the resources in the region in light of the new gas deal between the Greek Cypriots, Eni and Total that has excluded the TRNC.

Taçoy said the TRNC is unable to reach cheap and clean energy due to the Greek Cypriot's collusion with international companies without provision for the rights of the TRNC.

In order to gain access to competitively priced energy, Tacoy explained that the TRNC and Turkey would construct an interconnected system not only for domestic energy consumption but potentially for export also.

"The new gas deal between Greek Cypriots, Eni and Total indicate that Greek Cypriots want to act with tension, not with compromise," Tacoy said.

He argued that the Turkish Cypriots are facing "cruel and unfair embargoes" despite taking a peaceful stance with the Greek Cypriots.

He advised international companies that the steps they are taking in collaborating with Greek Cypriots to unilaterally explore resources on the island are harming the Turkish Cypriots' rights, which could cost them.

"They should not bolster the tension on the island," he urged. "We will not make concessions on our rights in Cyprus, and we will fight self-confidently with the support of our homeland, Turkey," he said.