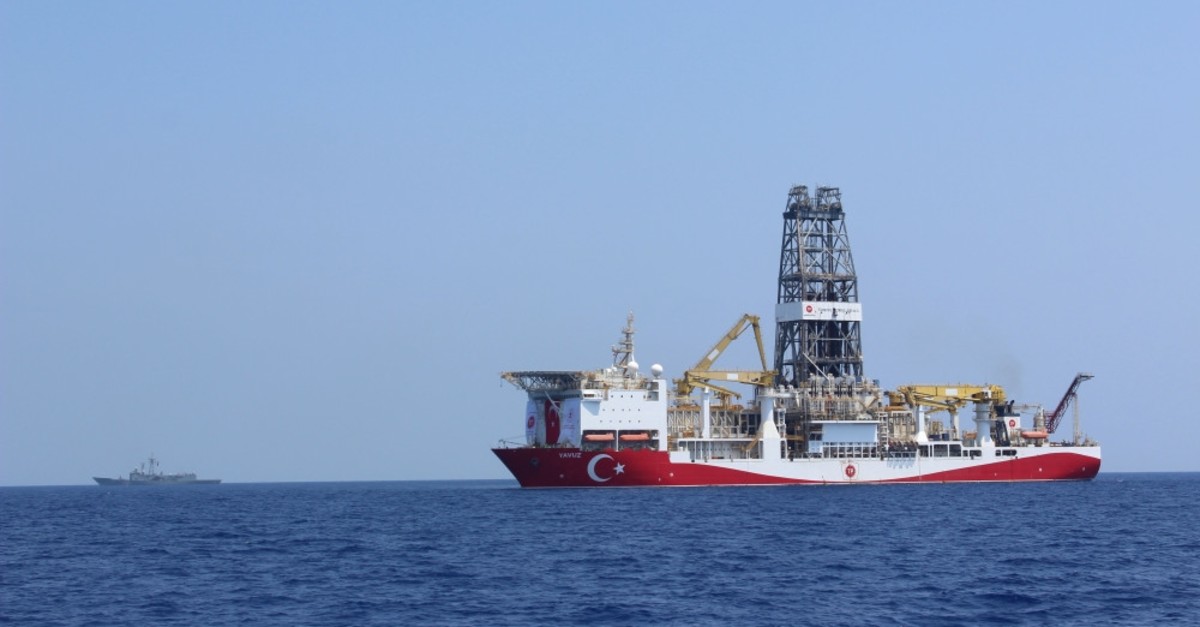 Turkey's drilling vessel Yavuz is set to begin a new round of offshore hydrocarbon exploration near the island of Cyprus on Oct. 7.
by Daily Sabah Oct 05, 2019 12:04 am

Turkey has sent its drilling vessel Yavuz to continue hydrocarbon exploration activities in the Eastern Mediterranean. The new well that Yavuz will drill is located on the disputed Block 7 of the Greek Cypriot administration for which Total and ENI inked an agreement last month

Turkey's second drillship Yavuz has arrived in the Eastern Mediterranean on Friday, just south of the island of Cyprus, and is set to launch its operations. It will begin drilling on Monday, according to Turkish diplomatic resources. On Thursday, Energy and Natural Resources Minister Fatih Dönmez announced Yavuz was en route to the Güzelyurt-1 well in the Mediterranean Sea to continue oil and gas exploration activities. "Yavuz is moving toward the Güzelyurt-1 well where it will drill. We will not stop to make our underground resources available to our nation," Dönmez said. According to an issued Navtex or navigational telex, the Yavuz drilling vessel will continue to work in the Mediterranean until January 2020. Turkish diplomat Çağatay Erciyes, director general for Bilateral Political and Maritime-Aviation-Border Affairs, said on Friday in a tweet, "Yavuz will launch a new round of offshore drilling operations on Oct. 7, 2019.

The drilling area lies within the Turkish CS [continental shelf] registered with the U.N. [United Nations] and in the permit licenses that the government granted to TP [Turkish Petroleum], which were published in the Turkish Official Gazette in 2012." Erciyes also highlighted that Turkey does not recognize the exclusive economic zone claim of the Greek Cypriot administration despite its efforts to declare the area as European Union waters, which he censured as a blatant violation of international law. He further noted that the unilateral actions of the Greek Cypriot administration has violated Turkey's and Turkish Cypriots' rights since 2003.

Turkish Cypriot Energy and Economy Minister Hasan Tocay also lambasted the threats made by the Greek Cypriot administration to arrest the crew of the Turkish vessel after its arrival in the island's waters.

"The steps of the Greek Cypriots ignore the rights of the Turkish people living on the island and they have no right to oppose our activities on the island," Tocay said.

A Navtex published on the website of the Larnaca-based Joint Rescue and Coordination Centre (JRCC) stated on Thursday that all those working on the Yavuz and its supporting vessels will face international arrest warrants.

According to vessel tracker maritimetraffic.com, Yavuz arrived at the Güzelyurt-1 well on Friday. The area is also unilaterally claimed by the Greek Cypriot administration as Block 7, included in its putative exclusive economic zone.

In pure disregard of the rights of the Turkish Cypriots living on the northern part of the island, the Greek Cypriot administration signed agreements with French Total and Italian ENI for the offshore hydrocarbon exploration within Block 7. The deal made the French and Italian companies the biggest players in natural resource exploration on the island. Eni and Total have teamed up to expand their oil and gas search off Cyprus and currently hold licenses for seven of Cyprus' 13 blocks inside the island's economic zone.

Other licensed companies include ExxonMobil and Texas-based Noble Energy along with partners Shell and Israel's Delek.

The Turkish Foreign Ministry severely criticized the unilateral moves of the Greek Cypriot administration and underscored that a section of the so-called license area number 7 remains within the Turkish continental shelf, which has been registered with the U.N.

"As has been the case so far, Turkey will in no way allow any foreign country, company or vessel to engage in unauthorized hydrocarbon exploration and exploitation activities within its maritime jurisdiction areas, and will continue to take the necessary measures to protect its rights and interests," the ministry had previously said.

In response to Yavuz's arrival on the island waters where it will continue exploration activities, British State Ministry for Europe Christopher Pincher said on Friday, "I made it very clear that Great Britain deplores any drilling in waters close to Cyprus but supports Cyprus's right to extract oils in its exclusive economic zone."

Pincher was speaking in Nicosia after a meeting with Greek Cypriot President Nicos Anastasiades, who also stated that Total and ENI are also the licensed energy companies to explore hydrocarbon resources in Block 7 and called Ankara's decision to send Yavuz to drilling Güzelyurt-1 well "severe escalation."

Since spring this year, Ankara has sent two drilling vessels — Fatih and most recently Yavuz — to the Eastern Mediterranean, asserting the right of Turkey and the TRNC to the resources of the region. The drilling area falls entirely within the Turkish continental shelf registered with the U.N. and in permit licenses that the Turkish government in previous years granted to Turkish Petroleum, the country's national oil company.

Turkey's first seismic vessel, the Barbaros Hayrettin Paşa, bought from Norway in 2013, has been conducting exploration in the Mediterranean since April 2017. A second seismic exploration vessel, MTA Oruç Reis, joined Turkey's exploration activities in the region at the end of August.

The TRNC was established in 1983 on the northern one-third of the island, and is only recognized by Turkey and faces a longstanding embargo in commerce, transportation and culture. The Greek Cypriot administration enjoys recognition by the international community as the Republic of Cyprus, established in 1960, and acceded into the European Union on May 1, 2004, only days after the April 24 referendum to end the breakaway and isolation of Turkish Cyprus – which was rejected by 76% of Greek Cypriot voters and accepted by 65% of Turkish Cypriot voters.

The accession of Greek Cyprus to the EU violated the EU's own rules of not allowing candidate countries with border disputes and assurances to Turkey and Turkish Cypriots that the Cypriot accession would not take place until a permanent solution had been reached on the island.