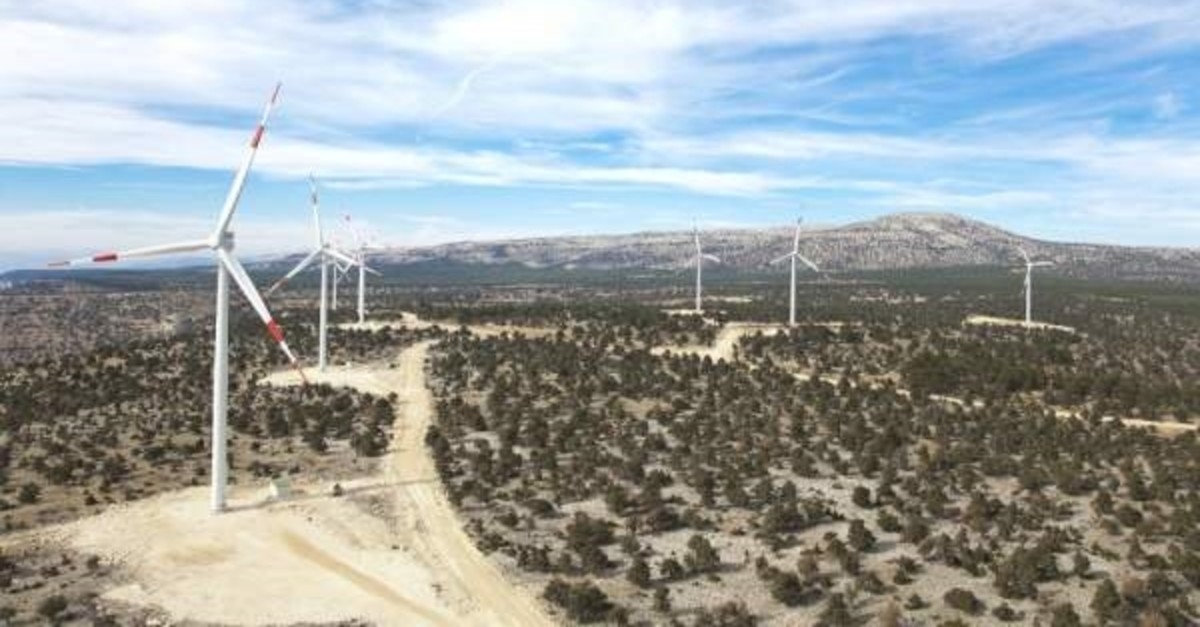 Last year, 6.6% of Turkey's electricity generation was provided by wind power plants. (u0130HA Photo)
by Evrin Güvendik
Oct 14, 2019 1:14 am
In the last five years, Turkey launched 215 hydropower plants, 90 wind power plants and 46 geothermal power plants, according to Energy and Natural Resources Minister Fatih Dönmez.
These plants, he said on Sunday, meet 30% of Turkey’s aggregate electricity demand annually.
Dönmez added that the construction of 216 hydropower plants was also planned in the coming period. He further noted that 180 wind power plants and 27 geothermal power plants are scheduled for construction in the coming period.
Adding some 1,085 megawatts (MW) to its energy mix last year, Turkey has maintained its lead in Europe and moved up to fourth place globally in hydroelectric power capacity installation.
The minister pointed out that Turkey's electricity consumption stood at 303.3 billion kilowatt hours (KW) in 2018, while in July 2019, hydropower plants had a production capacity of 28,424 MW, followed by wind power plants with 7,228 MW and geothermal plants with 1,336 MW.
Last year, 19.8% of Turkey's electricity generation was provided by hydropower plants, 6.6% by wind power and 2.5% by geothermal power. "In 2018, the amount and cost of the energy purchased from these generation facilities are determined freely between the buyers and the sellers, or the energy generated in these facilities is traded on the market through EPİAŞ, the Energy Stock Exchange Istanbul.
Thanks to public and private efforts, $4.8 billion worthy of investment was made in solar power, $4.3 billion in wind farms, $6 billion in hydroelectric plants, $1 billion in geothermal and $430 million in biomass in the last five years.
The Energy Ministry will announce details within a few weeks on small-scale renewable energy resources zone (YEKA) tenders that will be held in the first quarter of 2020.
Moreover, Turkey's National Energy Efficiency Action Plan, launched by the Energy and Natural Resources Ministry in early 2018, outlines a road map on saving $30.2 billion by 2030 by investing $10.9 billion in several different sectors, especially in the industrial and construction sectors.
Last Update: Dec 20, 2019 1:03 am