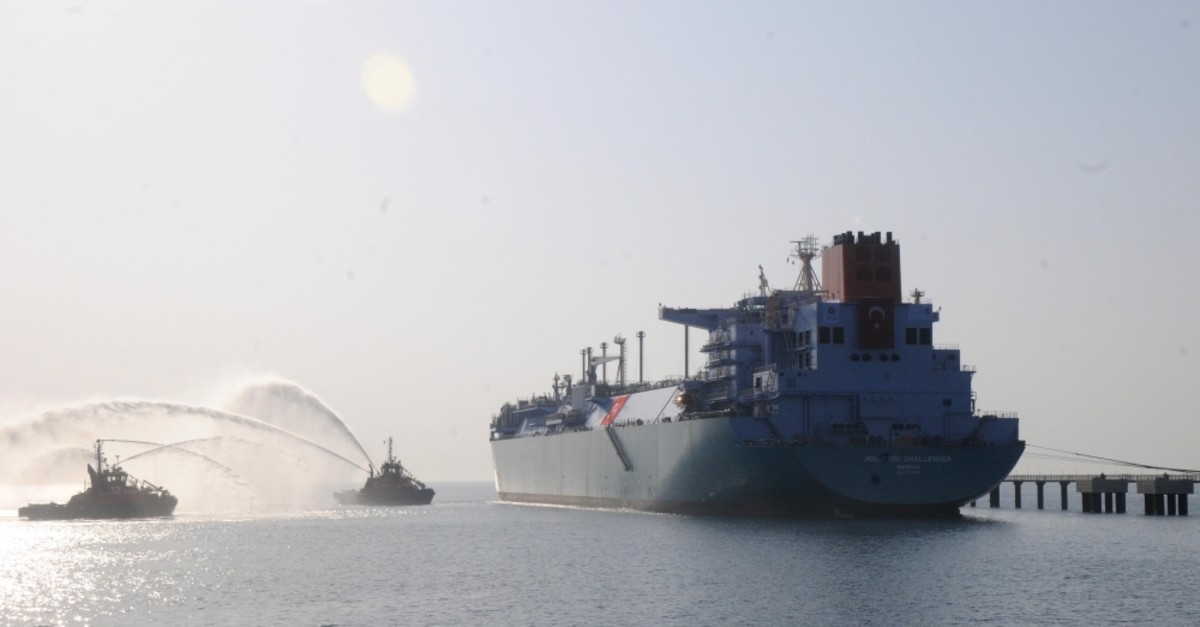 Turkey's second FSRU operated by BOTAu015e was commissioned in January 2018 in the Du00f6rtyol district of southeastern Hatay province on the Mediterranean coast. (DHA Photo)
by Daily Sabah with AA Oct 17, 2019 6:14 pm

The development of liquefied natural gas (LNG) infrastructure has made Turkey the second-largest market in Europe and seventh-largest in the world. The country imported approximately 7.7 billion cubic meters of LNG in the first seven months of the year

The development of Turkey's natural gas infrastructure, including multinational pipeline projects, improvement of facilities for liquefied natural gas (LNG) and the diversification of suppliers, have led to a profound enlargement of the country's gas market. As a result, Turkey has become Europe's second-largest LNG market.
Reducing its dependence on pipeline gas, Turkey imported 11.3 billion cubic meters (bcm) of LNG last year, accounting for 22.5% of the total gas purchases totaling 50.3 billion cubic meters. From January to July this year, the country’s LNG imports reached a record high at 7.7 bcm, according to the Energy Market Regulatory Authority (EMRA).
Turkey Natural Gas Distributors Association (GAZBİR) Chairman Yaşar Arslan said the significant development of the Turkish market was a huge success. “As a result of the increasing share of the LNG in the domestic gas demand, Turkey has become the seventh-largest LNG market in the world and is ranked second in Europe,” he said in his address at the 8th International Natural Gas Congress and Fair held in Istanbul yesterday.
Speaking of Turkey’s role in the energy sector and its integration with the global markets, Arslan stressed the liberalization steps that have been taken since the early 2000s. “The establishment of the Energy Market Regulatory Authority [in 2001] has enabled the empowerment of the energy industry with new investments,” he said and continued, “Turkey ranks second in the world with its ever-growing energy demand and has ensured a well-operating market.”
He added that the model Turkey has implemented in the natural gas distribution has become an example for other countries.
Annual consumption over 50 bcm
About the significant development of the natural gas distribution in Turkey, the GAZBİR chairman said the sector has maintained its upward trend with a gas 140,000 kilometer-long gas network of 16 million subscribers.
While distributors provide gas for 66 million citizens, Turkey’s annual gas consumption is calculated above 50 billion cubic meters, he noted.
“Turkey is the 18th-largest gas market in the world and fourth in Europe,” Arslan said. As the data suggests, he remarked, Turkey has reached nearly all of the targets set 32 years ago. “Our achievements compel us to set new goals. Out next aim is to become a gas trading hub,” he said.
In September 2018, the Energy Stock Exchange (EPİAŞ) launched a gas stock exchange that is currently used by an increasing number of natural gas traders as well as Turkey's Petroleum Pipeline Corporation Company (BOTAŞ) to supply natural gas to balance the transmission system. This evolving platform also offers a daily reference price for the gas market.
The trade volume for the spot natural gas market EPİAŞ hit a record high on Aug. 20, generating approximately TL 29 million, marking a volume rise of 854% over the previous day when 2.2 million cubic meters of natural gas was traded.
International Energy Forum General Secretary Dr. Sun Xiansheng also in his address stressed that Turkey has reinforced its position in the global energy market with projects such as Trans-Anatolian Natural Gas Pipeline Project (TANAP).
Inaugurated in June 2018, the 16 billion-cubic-meter capacity pipeline will deliver 6 billion cubic meters of gas to Turkey per year, while the remaining 10 billion cubic meters is destined for European markets via the Trans Adriatic Pipeline (TAP). The 4.5 billion euro ($5 billion) TAP will transverse Greece, Albania and the Adriatic Sea to reach Italy.
The TANAP project brings gas from the Shah Deniz-2 gas field to the Turkish border through Georgia via the South Caucasus Pipeline. It then connects to the TAP on Turkey's İpsala border, going on to deliver Azeri gas to European markets through pipes in Greece, Albania and the Adriatic Sea before coming ashore in Italy's south.
Dr. Sun stressed that Turkey’s gas projects make significant contributions to energy security. “Not only does Turkey secure its own supply security with ongoing natural gas projects but also strengthen its position to become an energy hub for European countries,” he said.
LNG infrastructure
Currently, Turkey operates four LNG terminals – two of which are floating storage and regasification units (FSRU) and the remaining two are land facilities. The LNG terminal in Marmara Ereğlisi, located 120 kilometers west of Istanbul in the northern Marmara Sea, currently operates with a capacity of 5.9 million tons. The terminal is capable of sending out 8 billion cubic meters per year. Another land terminal is located in the industrial Aliağa district of the Aegean province of İzmir with a capacity of 4.4 million tons of LNG. The İzmir terminal operated by Egegaz has a regasification and compression capacity for 6 billion cubic meters per year.
Turkey's first floating storage unit (FSRU) began operating in December 2016 in Aliağa and is capable of supplying 5.3 billion cubic meters gas per year, regasifying more than 12% of Turkey's annual gas demand. The second FSRU operated by BOTAŞ was commissioned in January 2018 in the Dörtyol district of southeastern Hatay province on the Mediterranean coast. It has a storage capacity of 263,000 cubic meters – the largest in the world. The unit has around 20 million cubic meters of daily output capacity. The third FSRU is also planned to be located in the Saros Gulf in the Aegean.
Last Update: Dec 20, 2019 1:06 am
RELATED TOPICS