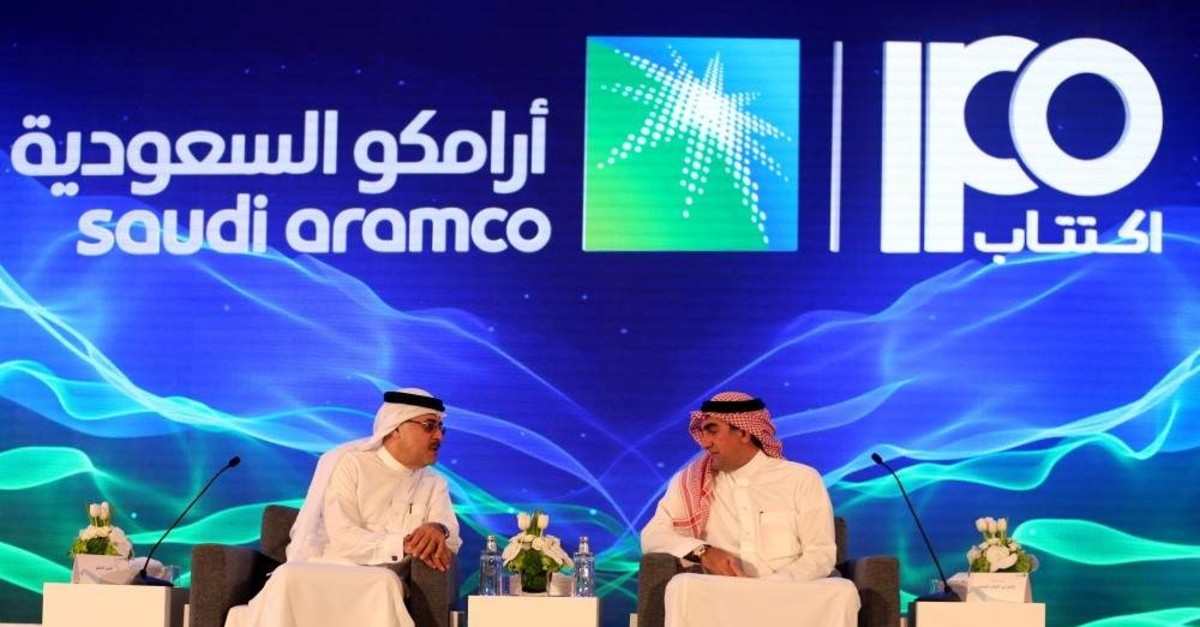 Saudi Arabia formally began an initial public offering Sunday of a sliver of oil giant Saudi Aramco after years of delay to create the world's most valuable listed company, hoping international and local investors will pay billions of dollars for a stake in the kingdom's crown jewels amid Riyadh's bid to diversify its economy.

An approval by Saudi Arabia's Capital Market Authority served as the starting gun for an IPO promised by Crown Prince Mohammed bin Salman since 2016. However, unlike traditional IPOs, Saudi Aramco offered no hoped-for price range for its shares, nor any idea how much of the firm would be offered to investors on Riyadh's Tadawul stock exchange.

Aramco did not give a time frame or say how much of the company it would sell, but sources have told Reuters the oil company could offer 1%-2% of its shares on the local bourse, raising as much as $20 billion-$40 billion.

But a 1% sale would raise "only" around $15 billion for Saudi coffers, less than the $25 billion generated by Chinese e-commerce giant Alibaba in its record-breaking IPO in 2014.

It would rank Aramco as the 11th biggest IPO of all time, Refinitiv data show. (For a graphic on the top 10 largest global IPOs, see https://tmsnrt.rs/33gWypM)

A sale of 2% of Aramco shares at a $1.5 trillion valuation would make it the biggest IPO of all time, beating Alibaba's.

The prospect of the world's largest oil company selling a piece of itself has had Wall Street on tenterhooks since Prince Mohammed flagged it three years ago.

Analysts told the Associated Press the kingdom likely hopes local investors will push its share prices toward a desired $2 trillion valuation and buoy that price ahead of any possible further listing abroad. Saudi Aramco also made a point in its filings to highlight its profitability and low costs through newly released data once held as a state secret by the Al Saud royal family, euphemistically referred to by the company as its "current shareholder."

Aramco said the IPO would be split into two tranches: one each for institutional and individual investors. The percentage of shares to be sold and the purchase price would be determined after the book-building period, it added in a statement.

However, economic worries, the trade war between China and the U.S. and increased crude oil production by the U.S. has depressed energy prices. A Sept. 14 attack on the heart of Saudi Aramco already spooked some investors, with one ratings company already downgrading the oil giant.

Confirmation of the share sale in Saudi Arabian Oil Co, or Aramco, as the oil giant is usually known, seven weeks after crippling attacks on its oil facilities underlines Saudi Arabia's determination to push on with the listing regardless.

The attacks targeted the Abqaiq and Khurais plants at the heart of Saudi Arabia's oil industry, causing fires and damage and temporarily shutting down 5.7 million barrels per day (bpd) of production - more than 5% of global oil supply. The company did not specify any additional security measures.

"We want to share the Aramco shares with the citizens of Saudi Arabia," said Yasir al-Rumayyan, the governor of Saudi Arabia's Public Investment Fund. "We want to get financial investors from all over the world."

It's hard to overstate the power of the oil firm, known formally as the Saudi Arabian Oil Co. It produces over 10 million barrels of crude oil a day, some 10% of global demand. The firm's net income in 2018 was $111.1 billion, far beyond the combined net income of oil giants BP PLC, Chevron Corp., Exxon Mobil Corp., Royal Dutch Shell PLC and Total SA.

Saudi Arabia's oil sits close to the surface in large pools, making it far cheaper to extract. Saudi Aramco also has proven liquid reserves of 226.8 billion barrels, the largest of any company in the world and "approximately five times larger" than those held by the five oil giants, according to the firm's IPO documents.

That's led to a clamoring from investors for Saudi Aramco stock since Prince Mohammed announced plans in 2016 for a two-phase IPO of 5% of the firm in the kingdom and abroad. The prince hopes to raise some $100 billion from investors, which will be funneled into the kingdom's PIF sovereign wealth fund for projects to boost employment and major development projects.

But the planned IPO saw years of delays overvaluation concerns and where to list it abroad. Oil prices, once over $100 a barrel, crashed in 2014 to under $30 a barrel. Benchmark Brent crude now trades around $60 a barrel, pushed up by a production cut by OPEC countries like Saudi Arabia and those outside of the cartel like Russia. Those cuts have limited Saudi production, in turn pushing up its estimated government budget deficit for next year to nearly $50 billion.

"It is a colossal public offering that could potentially generate more than 10 years’ worth of proceeds raised through IPOs in the country," said Salah Shamma, head of investment, MENA, Franklin Templeton Emerging Markets Equity.

He said some local investors could be selling other shares in order to shift their investments to Aramco, but this could well be a case of "short-term pain for long-term gain."

The announcement by the Capital Market Authority offered no timeline, share price or percentage of the company to be offered in the IPO, nor did officials or documents later released by Aramco. Both al-Rumayyan and Saudi Aramco CEO and President Amin H. Nasser also declined to say whether an international listing would still happen as well when addressing journalists in Dhahran in eastern Saudi Arabia, the city that hosts Saudi Aramco's headquarters.

"Usually when you go for an IPO, you have a target price," said Capt. Ranjith Raja, an oil analyst at data firm Refinitiv. "There's still no clarity in what they're trying to look at."

Based on that, Saudi Arabia may choose to rely on local investors to push up the price of the stock, Raja said.

The Saudi-owned satellite channel Al-Arabiya reported last week, citing anonymous sources, that pricing for the stock will begin Nov. 17. A final price for the stock will be set Dec. 4, with shares then beginning to be traded on the Tadawul on Dec. 11, the channel reported. The channel is believed to have close links to the kingdom's Al Saud royal family and correctly identified Sunday as the IPO's launch.

Analysts say a $2 trillion valuation - Apple and Microsoft separately, for instance, are $1 trillion - may be a stretch. By announcing the start of the IPO on Sunday, Prince Mohammed may have been convinced to take a lower valuation in order to get the IPO moving.

Saudi Aramco has sought to assure investors, given the questions over its valuation and the potential hazards of future attacks or geopolitical risk. A presentation posted to Aramco's website last month announced the intent to offer a $75 billion dividend for investors in 2020. That's the payment per share that a corporation distributes to its stockholders as their return on the money they have invested in its stock.

It also pledged that from 2020 to 2024, any year with a dividend under $75 billion would see "non-government shareholders" prioritized to get paid.

But beyond stocks, worries persist that Saudi Arabia could be hit by another attack like the one Sept. 14, which temporarily halved its production. The U.S. blames the attack on Iran. Tehran denies it launched the cruise missiles and drones used in the assault. Yemen's Houthi rebels claimed responsibility, but analysts say the weapons used wouldn't have the range to reach their targets from Houthi-controlled areas of Yemen.

Responding to a journalist's question about the safety of an Aramco investment, al-Rumayyan spoke about how quickly the company restored production after the attack.

"The oil traders, they saw this as a nonevent, and that means it is really safe," he said. "That's what the money is saying."

Aramco said in Sunday's statement that it posted a net income of $68 billion during the nine-month period ending on September 30. Revenues and other income related to sales for the same period amounted to $244 billion, it added.

To help get the deal done, Saudi Arabia is relying on easy credit for retail investors and hefty contributions from rich locals.

Aramco said the Saudi market regulator, which approved its application to list on Sunday, had issued an exemption for non-resident institutional foreign investors to subscribe.

It said the government will forgo its right to receive a portion of cash dividends on Aramco's shares, giving priority on such distribution to new shareholders.

Aramco is cutting the royalties it pays to the Saudi government - to give comfort to investors.

Aramco stated that, effective as of Jan. 1 2020, it would begin to adopt a progressive royalty scheme, with a marginal rate set at 15% up to $70 per barrel, 45% between $70 and $100, and 80% if the price rises higher. The listing announcement had been expected on Oct. 20 but was delayed after advisers said they needed more time to lock in cornerstone investors, three sources told Reuters.

A growing movement to fight climate change and embrace new "green" technologies have put some fund managers, particularly in Europe and the United States, off the oil and gas sector.

Initial hopes for a blockbuster international listing of about 5% were dashed when the share sale was halted last year amid debate over where to list Aramco overseas.

Aramco said the IPO timetable was delayed because it began a process to acquire a 70% stake in petrochemicals maker Saudi Basic Industries Corp.

IPO preparations were revived over the summer after Aramco attracted huge interest in its first international bond sale, seen as a pre-IPO relationship-building exercise with investors.

The bond sale forced the secretive company to reveal its finances for the first time, including net income of $111 billion, over a third bigger than the combined net income of the five supermajors Exxon Mobil, Royal Dutch/Shell, BP, Chevron and Total.

Oil majors have been raising payouts to shareholders to counter rising pressure from climate activism.

Aramco said on Sunday it intended to declare aggregate ordinary cash dividends of at least $75 billion in 2020.

At a valuation of $1.5 trillion, this would mean a dividend yield of 5%, below that offered by rival Royal Dutch Shell. Shell's dividend yield is over 6%, according to Refinitiv data.

More than two dozen banks are handling the blockbuster IPO.

Lazard Frères SAS, M. Klein and Co and Moelis have been acting as special advisors to the company, the Aramco statement said.