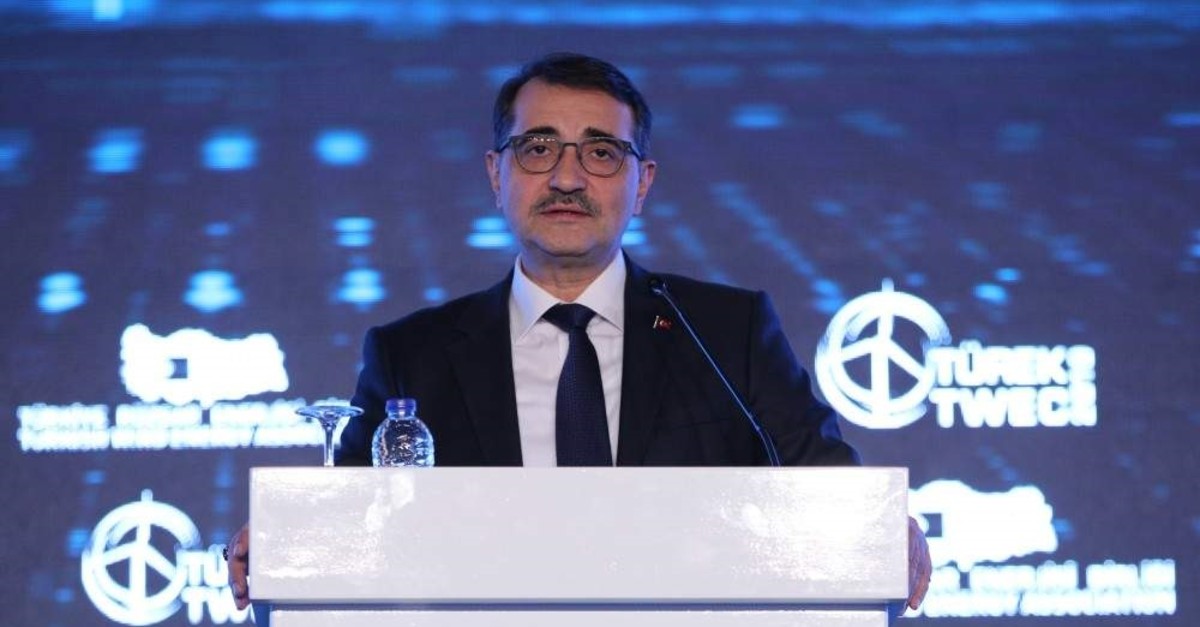 Intense efforts put forward by the public and private sectors has led to a profound increase in electricity generation from renewable energy resources, which claimed 46% of total production on a monthly basis between January and October this year

Renewable energy resources have accounted for 46% of Turkey’s electricity generation so far this year, Energy and Natural Resources Minister Fatih Dönmez said Tuesday.
This 46% ratio represents a steady monthly increase, Dönmez said during his address at the 8th Turkish Wind Energy Congress organized by the Turkish Wind Energy Association (TWEA) that kicked off in the capital Ankara on Tuesday.
Combined local and renewable energy resources saw a total share of 64% in electricity production between January and October this year, marking a record high, the minister added.
"With these figures, we reached our objective of producing two-thirds of our electricity in the short-term from local and renewable resources. Now, we aim to raise this ratio to higher levels," Dönmez said. “This average is not a volatile rate but regular progress,” he remarked at the congress, which has provided a platform to discuss in detail the investments, technology, and research and development in the wind power sector.
Professionals from the energy sector pointed out the necessity to increase the domestic production rate in wind energy, while officials stated that Turkey has already reached its goals in electricity production from renewable sources and called for further improvements.
Ankara set a goal of raising the share of domestic, renewable sources up to two-thirds in the National Energy and Mining Policy, a doctrine announced in April 2017 outlining the key elements of Turkey's energy policy.
Currently, Turkey produces 8% of its electricity from wind energy but with increasing energy demand expected over the next three years due to economic growth, Turkey aims to raise this share to 10%.
“Our electricity production from wind energy rose 14.6% in October from the same month last year and increased approximately 70% in the last five years," the energy minister explained. Turkey ranks fifth in Europe in power generation from wind, he also noted.
Renewable energy resources have a 48% share of total installed capacity today. The total installed capacity of Turkey’s 262 wind farms, both licensed and unlicensed, has reached 7,500 megawatts (MW) and represents an 8% share of total installed capacity. "We rank sixth in Europe and 12th in the world in wind installed capacity," Dönmez asserted.
Out of the target 10,000-MW installed capacity from wind farms for the 2017-2027 period, "1,500 MW have been completed," he confirmed. “In the period to come, we will increase our capacity with new 40-50 MW mini Renewable Energy Resources Zones (YEKA), wind energy plants and solar plants,” the minister added.
Turkey has taken significant steps in all kinds of renewable energy since the early 2000s. While the country’s installed capacity in wind energy was 19 MW in 2002, it was increased to 364 MW in 2008, and today the number has surpassed 7,600 MW.
The minister hailed the progress made since 2008 when wind energy only had an installed capacity of 19 MW in 2002. He said that capacity rose to 364 MW in 2008 but soared to the current 7,500 MW, marking a 400-fold increase.
In the future, further additions will be made through mini YEKAs in Turkey and through solar energy power plants (GES) to add 40-50 MW, he said.
Integration with global markets
Speaking at the congress, Hakan Yıldırım, president of the TWEA, indicated that Turkey has established a wide ecosystem from scratch over 10 years through actors in the sector, including investors, financiers, advisers and all kinds of workers on the ground, adding that their aim is to reach 25,000 MW of wind power by 2030. “Now, we are playing ‘the second half,’ in which we are aiming to integrate the sector with global markets and increase indigenousness in production of all materials necessary in the wind energy sector,” he said.
Yıldırım added that a predictable market, developing national industry and more cooperation on a global scale are significant pillars for reaching these targets.
Along the same vein as Yıldırım, Energy Market Regulatory Authority (EMRA) head Mustafa Yılmaz drew attention to increasing the contribution of the national industry in the sector. “Materials in establishing gas infrastructure are 95% domestic. Through the effort of all the actors in the sector, we can accomplish the same level in wind energy,” Yılmaz said.
The EMRA head added that the benefits of renewable energy should be explained to not only sector professionals and officials but also to regular people.
“Coal is the alternative, but we want to continue with environmentally friendly resources,” he stressed.
Yılmaz also announced that EMRA will collect bids for a 2,000 MW wind power plant project in April 2020 as the energy watchdog aims to increase electricity generation from wind power.
Record power generation at hydroelectric power plants
Electricity generated at the hydroelectric power plants (HPP) commissioned by the General Directorate of State Hydraulic Works (DSI) and the private sector reached 79.3 billion kilowatt-hours (kWh) in the first 10 months of this year. Agriculture and Forestry Minister Bekir Pakdemirli said in a written statement on Tuesday that "67.2 billion kWh, the highest annual production achieved in 2016, has already been exceeded, and a new record has been set.” Pakdemirli said that TL 19.8 billion was brought into the national economy with 79.3 billion kWh in the first 10 months of this year along with the investments.
Pakdemirli pointed out in his written statement that HEPPs rank second among power generation resources as of this year. Noting that they invested in the energy sector to bring the power of wasted water to the Turkish economy, Pakdemirli further underlined the necessity of implementing HEPP projects for Turkey as clean and renewable energy resources.
“In the 10-month period, the share of resources in electricity generation was 36.3% for coal, 31.5% for HEPP, 17.3% for natural gas, 7.3% for wind power plants, 3.4% for solar power plants and 2.6% for geothermal power plants,” he continued.
Minister Pakdemirli said Turkey is an energy importing country. “We have to use this energy, which is our own resource,” he noted. “If we had produced the 79.3 kWh energy generated from this source in 10 months from the natural gas we imported, we would have had to pay $3.5 billion to other countries. Therefore, HEPPs make a positive contribution to our foreign trade deficit.”
Last Update: Dec 20, 2019 1:28 am
RELATED TOPICS