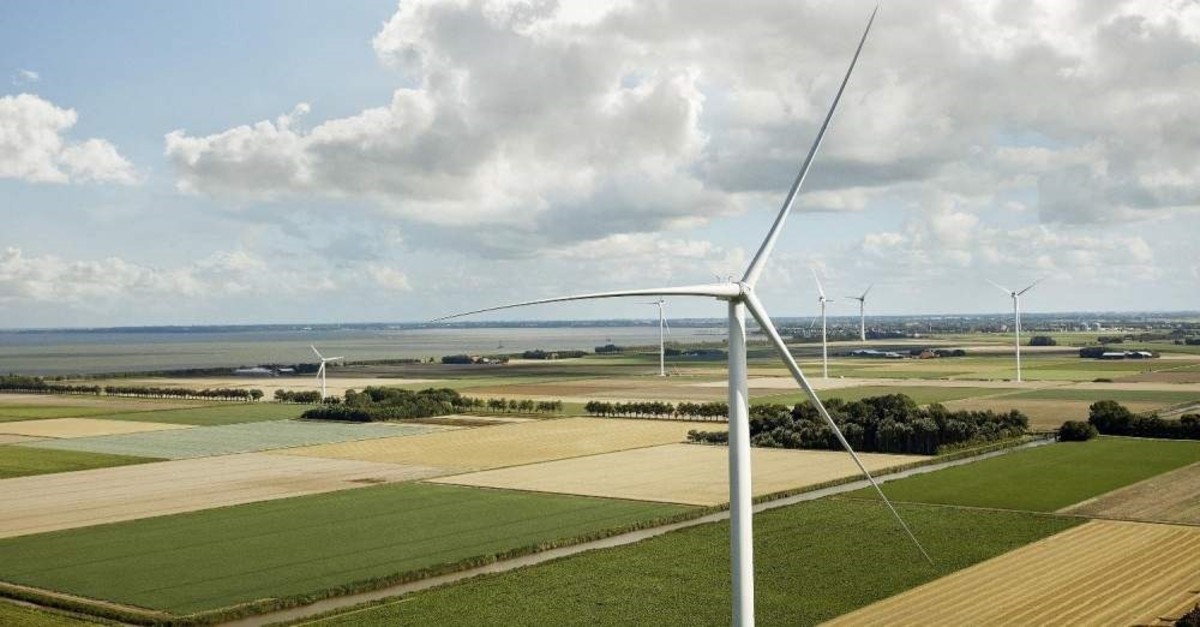 Wind turbines to be produced at the ?zmir plant will meet the electricity needs of approximately 1.1 million households in five regions. (DHA Photo)
by Daily Sabah Nov 08, 2019 1:41 am

Taking another step toward renewable energy, Turkey is poised to launch production at the $100-million factory, established after the first wind power Renewable Energy Resource Areas (YEKA) tender was won by Siemens-Türkerler-Kalyon consortium in 2017.
Wind turbines will be produced in the factory, which was initially built in accordance with the requirement of a 65% domestic production rate. The turbines will meet the electricity need of approximately 1.1 million households with power plants in five regions.

Working on reducing dependence on energy imports and increasing production from natural resources, Turkey is taking another step in this direction. Authorities say that the Renewable Energy Resource Areas (YEKA) are the basis of Turkey’s giant clean energy projects and that the requirement of locality rate in YEKAs both increases Turkey’s energy power and strengthens domestic production.
The latest example was the turbine factory established by the Siemens-Türkerler-Kalyon consortium in İzmir Aliağa Organized Industrial Zone (OIZ) after winning the RES-1, the first YEKA tender in 2017.
The biggest factor in the establishment of the factory, which was built with an investment of more than $100 million, was the 65% locality rate requirement specified in the tender. Meanwhile, most of the turbines and other technologies used in the previous RES tender were imported.

Speaking at the 8th Turkish Wind Energy Congress (TÜREK 2019) panel "First YEKA Experiences and Future Capacity Allocation Models," Ebru Çiçekliyurt, CEO of Siemens Gamesa, announced that the first turbine factory of YEKA project would be commissioned later this month. “The construction of our factory is completed. The factory will be ready for production by the end of this month,” she said.

Çiçekliyurt said the İzmir factory will produce 100 nacelle units annually, which corresponds to a potential that can produce approximately 500 megawatts (MW) of electricity. “Our factory is located in a 40,000-square-meter campus and we think that upon completion of the project, we will create jobs for 500 people,” she added.

Hakan Yıldırım, the CEO of Kalyon Energy, said the main focus of the first YEKA tender was the realization of the financing phase of this project, informing that the factory, which will be opened within the scope of YEKA-1, will reach full production capacity in eight to 10 months.
“We all managed this project. We had serious problems and tried different expansions and solutions. At the point of financing, we showed a bank like J.P. Morgan as an arranger. We are pleased with the point we have arrived now,” Yıldırım further stressed.

Within the scope of the RES-1 tender, power plants with a size of at least 50 MW will be installed in the Kayseri-Niğde, Sivas, Edirne-Kırklareli-Tekirdağ, Ankara-Çankırı-Kırıkkale, and Bilecik-Kütahya-Eskişehir regions. With the introduction of power plants that will receive over $1 billion in investment, a minimum of three billion kilowatt-hours of electricity will be generated each year, and the annual electricity needs of approximately 1.1 million households will be met by the wind energy.
At the same time, an annual average of 1.5 million tons of carbon emission reduction will be achieved thanks to the wind facilities to be established. A total of 3,750 jobs will be created at the plants in this regard.