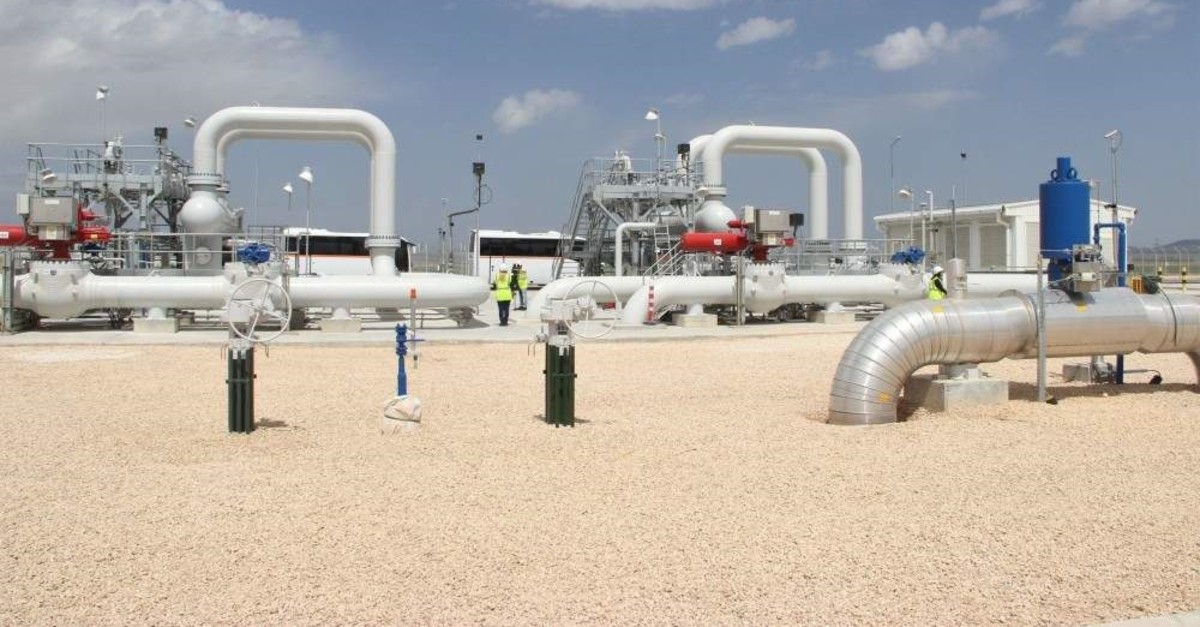 The Trans-Anatolian Pipeline is about to mark a significant milestone in regional energy geopolitics as the project counts down the days to pump gas into its European leg, the Trans Adriatic Pipeline

The Silk Road of energy Trans-Anatolian Natural Gas Pipeline (TANAP) is counting down the days to commence pumping the first gas to the European section of the Southern Gas Corridor (SGC). A ceremony for the first gas compression into the Trans Adricatic Pipeline (TAP) will be held on the Turkish-Greek border town İpsala on Nov. 30 with the participation of President Recep Tayyip Erdoğan, Azerbaijani President İlham Aliyev and other heads of state including Bulgarian Prime Minister Boyko Borisov and ministers from various countries.
The ceremony will be another significant step for regional energy supply security as it will demonstrate the importance of multinational cooperation to ensure diversification of supply sources.
The gas release to the TAP project, which will be fully completed next year, will strengthen Turkey’s key role in regional energy cooperation.
The Southern Gas Corridor carries Azerbaijani gas produced in the Shah Deniz field and other fields south of the Caspian Sea to European markets. Its largest component, TANAP, is now poised to launch the next phase of the project by releasing gas to the TAP with a ceremony to be held on Nov. 30.
The TAP, the European leg of the Southern Gas Corridor (SGC), starts in Greece and extends into Italy and is yet to be completed. The Turkish and Azerbaijani presidents are expected to convey the message that their countries are ready to supply gas to Europe, boosting the continent’s gas supply security.
TANAP does not merely address Turkey's gas supply security by diversifying resources but will also boost European supply security by enriching the energy resource channel for continental countries while enabling Azerbaijan to expand into new export destinations. Therefore, the project redesigns the regional and global geopolitics of energy.
Accordingly, the project boosts the regional climate of peace and stability, bringing a number of countries together for energy cooperation.
TANAP is also believed to enable other gas producers to capitalize on the Silk Road of energy, thereby reshaping global energy geopolitics.
TANAP ROUTE
TANAP, which was officially inaugurated in June 2018 with a grand ceremony in the central Turkish province of Eskişehir, has an estimated delivery of 3.04 billion cubic meters (bcm) to the Turkish gas network. By the end of June 2020, the pipeline is expected to deliver 6 bcm of gas to Turkey. The Southern Gas Corridor, Petroleum Pipeline Corporation (BOTAŞ), BP and SOCAR Turkey own 51%, 30%, 12% and 7% of the shares in TANAP, respectively. When TAP is fully ready to operate, the entire pipeline project will have the capacity to deliver 16 bcm of gas.
TANAP runs from the Turkish border with Georgia, beginning in the Turkish village of Türkgözü in the Posof district of Ardahan, and through 20 provinces including Kars, Erzurum, Erzincan, Bayburt, Gümüşhane, Giresun, Sivas, Yozgat, Kırşehir, Kırıkkale, Ankara, Eskişehir, Bilecik, Kütahya, Bursa, Balıkesir, Çanakkale, Tekirdağ and Edirne until it ends at the Greek border in the İpsala district of Edirne in Thrace. From this point, TANAP is connected to the TAP to convey natural gas to European nations.
The 4.5 billion-euro ($5.1 billion) TAP will transverse Greece, Albania and the Adriatic Sea to reach Italy. Azerbaijani gas is expected to reach European markets by 2020. The 1,850-kilometer TANAP and the 878-kilometer TAP were interlinked at the Maritsa river, located on the Turkey-Greece border, in November 2018.
The legal framework of the project was devised through the agreement titled the "Intergovernmental Agreement between the Republic of Turkey and the Azerbaijan Republic for the Trans-Anatolian Natural Gas Pipeline System," signed in June 2012 in Istanbul. The construction of the project started in March 2015 in the eastern province of Kars.
The 16 bcm pipeline will deliver 6 bcm of gas to Turkey per year while the remaining 10 bcm is destined for European markets via the TAP.
The transmission capacity of TANAP will be increased to 24 bcm and then to 31 bcm through additional investments.
The main line of the project includes seven compressor stations, four measuring stations, 11 pigging stations, 46 block valve stations and two off-stake stations to supply Turkey's natural gas network. The project also includes two exit points that will feed the gas into the European system from the Turkish network. The points are located in Eskişehir and Turkish Thrace.
TANAP also contributes to the socioeconomic development of local people through sustainable projects accomplished to support provinces, districts and villages on its route.
Approximately TL 55 million has been provided for investment, environmental and infrastructure projects through agencies and institutions, including the Eastern Anatolia Project (DAP) Regional Development Administration.
TAP ROUTE
For the Southern Gas Corridor to fulfill its purpose to deliver Caspian gas to the European markets, the TAP should start operating according to its schedule, planned for next year.
TAP’s design offers various connection options to a number of existing and proposed pipelines along its route. According to the Southern Gas Corridor project, TAP will connect to the Italian natural gas grid operated by Snam Rete Gas, from which all Italian gas exit points to European destinations can be reached.
Moreover, grid operators Snam Rete Gas and Fluxys have agreed to develop physical reverse flow capabilities between Italy and the U.K. by interconnecting the gas markets of Italy, Switzerland, Germany, the Netherlands and Belgium, enabling Caspian gas to reach the UK.
The TAP can provide a new source of gas by linking to existing and planned pipeline infrastructure, including reverse flow through an interconnector to the Kula-Sidirokastro line and proposed connection with the planned Interconnector Greece Bulgaria (IGB) pipeline.
The Southern Gas Corridor is a major component of the European Union energy policy. TAP’s role in realizing that vision will not only provide economic benefits. It will also ensure that one of the continent’s vital energy routes remains viable for decades to come.
Last Update: Dec 20, 2019 1:51 am
RELATED TOPICS