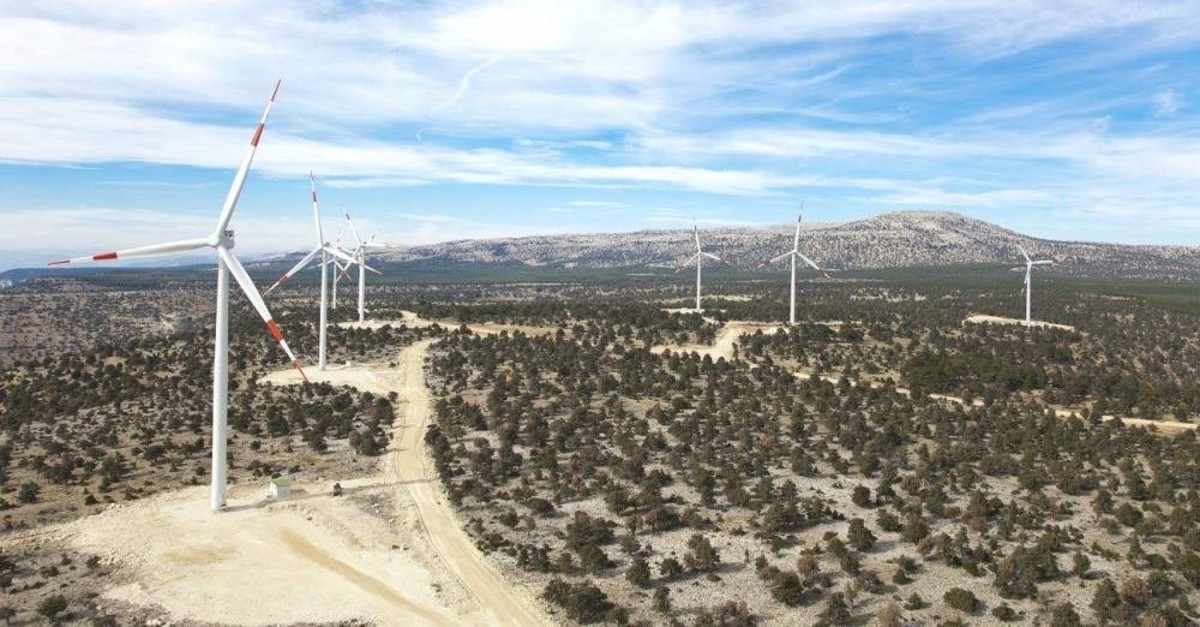 Turkey's wind power capacity has surpassed 7,600 megawatts and the country is planning to expand it with more projects in the upcoming period.
by Daily Sabah with AA Nov 27, 2019 7:01 pm

Renewable energy has been one of the primary pillars through which Turkish and German economic ties have developed. Recently, the two countries have demonstrated strong intentions to further their cooperation, particularly in the field of energy. As concrete action in broader cooperation plans, more German companies operating in the renewable energy sector will assume more important roles in Turkey, according to Germany-Turkey Commerce and Industry Chamber General-Secretary Thilo Pahl.
Germany has been one of the top economic and commercial partners of Turkey. The bilateral trade volume between the two countries stands at $24.5 billion in the period of January to September, according to Turkish Statistical Institute (TurkStat) data. The trade volume between the two countries was recorded at $36.5 billion last year. Data from Turkey's central bank also revealed that Turkey attracted nearly $10 billion in foreign direct investment (FDI) from Germany from 2002 to September 2019.
In a statement to Anadolu Agency (AA) published yesterday, Pahl stressed that cooperation between Turkish and German energy and natural resources ministries is navigating the future of energy partnership.
While he remarked that the Turkish economy will register a growth performance in 2020, he underscored the fall in the German manufacturing sector.
“This year, the global automobile sales have contracted. This shrinkage offers great opportunities for mutual investments and commercial transactions, which at the same time creates optimum conditions for foreign investments that could flow into Turkey from other countries,” Pahl explained.
The general-secretary also drew attention to the continuous growth of the Turkish renewable energy sector.
“German companies operate as investors and suppliers in the Turkish renewable energy and energy efficiency sectors,” he said and underlined the huge contribution to the know-how in the sector, which is essential for the sustainability of the renewable investments.
“We believe that Turkey and Germany will form better and longer-term relations in the field of renewable energy,” Pahl said and continued, “German firms will take on a bigger role in the field.”
German firms have been actively involved in Turkish wind and solar power projects.
Siemens, together with its Turkish partners Kalyon and Türkerler, was contracted in August 2017 for the establishment of a 1,000-megawatt (MW) wind power plant as part of Renewable Energy Resource Areas (YEKA) program.
The total installed capacity of Turkey's 262 wind farms, both licensed and unlicensed, has surpassed 7,600 MW and represents an 8% share of total installed capacity. The country ranks sixth in Europe and 12th in the world in wind installed capacity. The country's installed capacity in wind energy was 19 MW in 2002, it was increased to 364 MW in 2008. Furthermore, in an effort to expand existing capacity, Turkey's energy watchdog, the Energy Market Regulatory Authority (EMRA), will collect bids for a 2,000 MW wind power plant project in April 2020.
Also in 2017, Turkish energy firm Prime Enerji A.Ş signed an agreement with Germany-based InTEC Energy Solutions to establish a 14-megawatt solar power plant in southwestern Turkey's Denizli.
In May, Turkish energy firm Enerjisa and Germany’s Enercon were contracted for the construction of four onshore wind power farms in Turkish cities, each with a capacity of 250 MW.
German-based wind power equipment manufacturer Nordex CEO Jose Luis Blanco Dieguez also recently stressed that the company is looking for more opportunities to invest in the Turkish wind power sector.
Last Update: Dec 20, 2019 1:58 am
RELATED TOPICS