Heads of state, ministers to attend ceremony for TANAP gas release to Greece 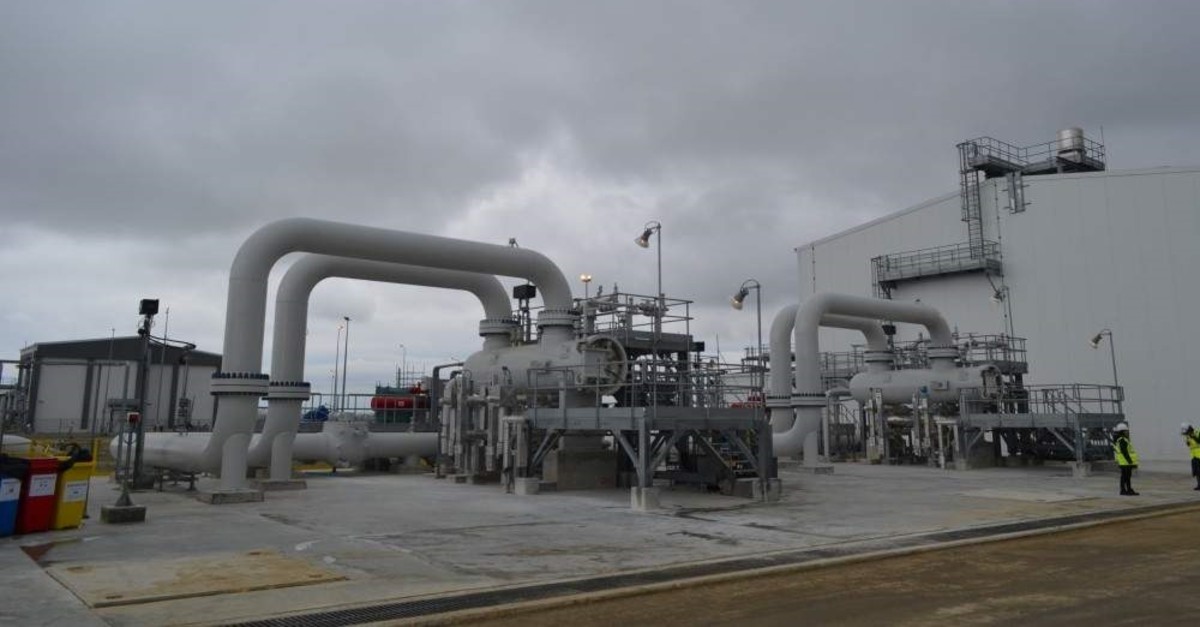 The Trans-Anatolian Natural Gas Pipeline includes two exit points that will feed gas into the European system from the Turkish network. The points are located in Eskiu015fehir and Turkish Thrace. (IHA Photo)
by Daily Sabah Nov 28, 2019 5:28 pm
The Trans-Anatolian Natural Gas Pipeline (TANAP), which plays a significant role in regional energy supply security and bolsters Turkey’s strategic position as a key player, will begin carrying gas to the European section of the Southern Gas Corridor (SGC) on the Turkish-Greek border.
The ceremony to release gas into the Trans Adriatic Pipeline (TAP) will take place tomorrow with the participation of President Recep Tayyip Erdoğan, Azerbaijani President İlham Aliyev, Bulgarian Prime Minister Boyko Borisov, Bosnia-Herzegovina Presidential Council Bosniak member Shefik Dzaferovic and Georgian Prime Minister Giorgi Gakharia. Serbian Parliament Speaker Maja Gojkovic, Northern Macedonia Deputy Prime Miniter Koco Angjushev, Greek Environment and Energy Minister Kostis Hatzidakis, Qatari Energy Mohammed Saleh Al-Sada, Northern Macedonia Economy Minister Kreshniki Bekteshi, and Serbian Mining and Energy Minister Alexandar Antic are also expected to attend the ceremony.
The Southern Gas Corridor carries Azerbaijani gas produced in the Shah Deniz field and other fields south of the Caspian Sea to European markets. Its largest component, TANAP, is now poised to launch the next phase of the project by releasing gas to TAP. The event will be another significant step for regional energy supply security as it will demonstrate the importance of multinational cooperation to ensure diversification of supply sources.
TAP, the European leg of the Southern Gas Corridor (SGC), starts in Greece and extends into Italy and is yet to be completed. The Turkish and Azerbaijani presidents are expected to convey the message that their countries are ready to supply gas to Europe, boosting the continent's gas supply security.
TANAP does not merely address Turkey's gas supply security by diversifying resources but will also boost European supply security by enriching the energy resource channel for continental countries while enabling Azerbaijan to expand into new export destinations. The project thereby redesigns the regional and global geopolitics of energy.
TANAP, which was officially inaugurated in June 2018, with a grand ceremony in the central Turkish province of Eskişehir, has an estimated delivery of 3.04 billion cubic meters (bcm) to the Turkish gas network. By the end of June 2020, the pipeline is expected to deliver 6 bcm of gas to Turkey.
TANAP runs from the Turkish border with Georgia, beginning in the Turkish village of Türkgözü in the Posof district of Ardahan, and through 20 provinces including Kars, Erzurum, Erzincan, Bayburt, Gümüşhane, Giresun, Sivas, Yozgat, Kırşehir, Kırıkkale, Ankara, Eskişehir, Bilecik, Kütahya, Bursa, Balıkesir, Çanakkale, Tekirdağ and Edirne, ending at the Greek border in the İpsala district of Edirne in Thrace. From this point, TANAP is connected to TAP to convey natural gas to European nations.
The main line of the project includes seven compressor stations, four measuring stations, 11 pigging stations, 46 block valve stations and two off-stake stations to supply Turkey's natural gas network. The project also includes two exit points that will feed the gas into the European system from the Turkish network. The points are located in Eskişehir and Turkish Thrace.
Last Update: Dec 20, 2019 1:59 am
RELATED TOPICS