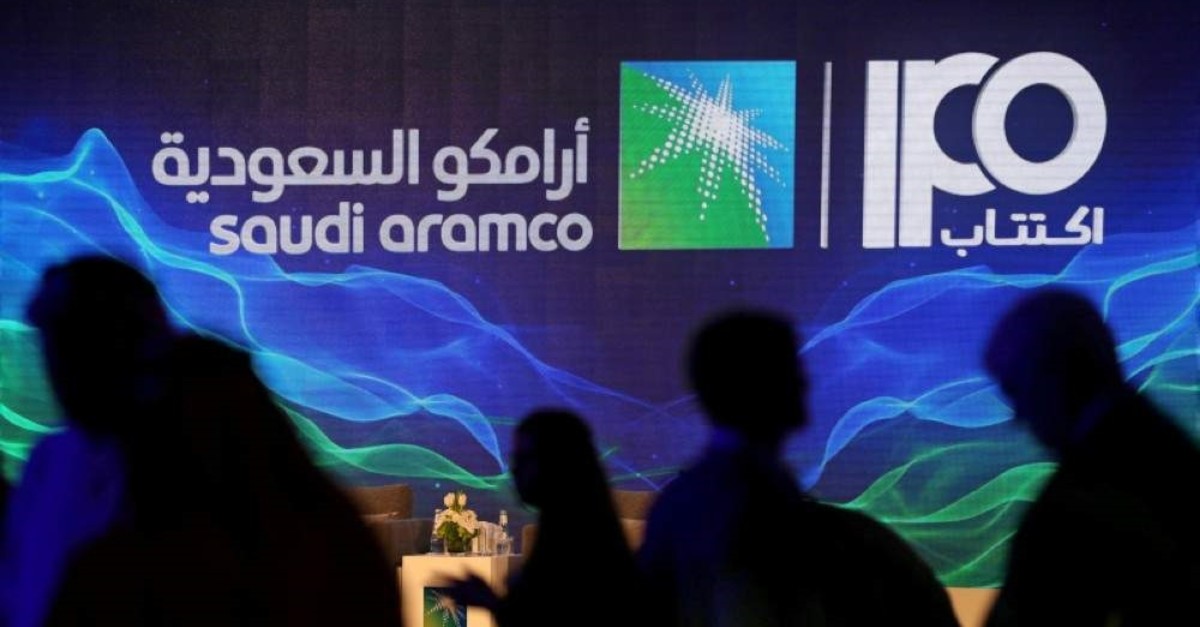 A sign of Saudi Aramco's initial public offering (IPO) is seen during a news conference of the state oil company at the Plaza Conference Center, Dhahran, Saudi Arabia, Nov. 3, 2019. (REUTERS Photo)
by Dec 02, 2019 1:14 pm
The Organization of the Petroleum Exporting Countries (OPEC) and its allies plan to deepen oil cuts and have a deal in place set to run at least until June 2020 as Saudi Arabia wants to deliver a positive surprise to the market before the listing of Saudi Aramco, two sources familiar with the talks said.
The deal being discussed by the OPEC and other producers, known as the OPEC+, would be to add at least 400,000 barrels per day (bpd) to existing cuts of 1.2 million bpd. The current deal will run until March.
“They (the Saudis) want to surprise the market,” one of the sources said.
Another two sources said the latest OPEC analysis, drawn up by OPEC’s Economic Commission Board (ECB), found that if additional cuts were not made, a large oversupply and build up in inventory would be seen in the first half of 2020.
Saudi Prince Abdulaziz bin Salman heads to Vienna this week for his first OPEC meeting as Saudi Arabia’s energy minister.
The veteran oil official, known as a tough negotiator, wants to ensure oil prices stay high enough during Aramco’s initial share offering (IPO), sources said.
The IPO will be priced on Dec. 5, the same day the OPEC meets in Vienna. The OPEC+ grouping will hold talks on Dec. 6.
Saudi officials, including Prince Abdulaziz, have insisted on stricter compliance with the current cuts, especially as countries such as Iraq and Nigeria have produced well above their quotas, while Riyadh has cut more than demanded.
However, the Saudis are lobbying other producers to deepen cuts and have been signaling that they are ready to continue taking the biggest burden and to cut well in excess of their target.