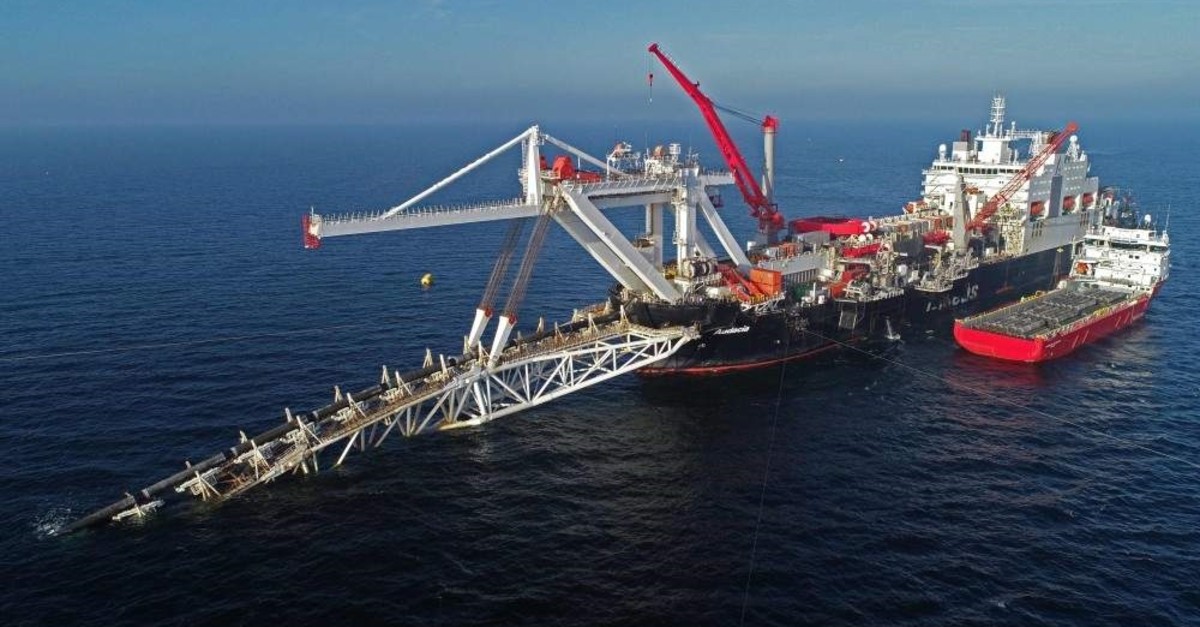 Aerial view taken Nov. 15, 2018 shows Audacia ship as parts of the Nord Stream 2 pipeline are laid in the Baltic Sea off the coast the island of Ruegen, northeastern Germany. (AFP Photo)
by Compiled from Wire Services Dec 12, 2019 5:14 pm

"Decisions on European Energy Policy are taken in Europe," Foreign Minister Heiko Maas tweeted with regard to possible U.S. sanctions against Nord Stream 2, which the bill calls for U.S. President Donald Trump to impose.

"We reject foreign interference and, as matter of principle, extraterritorial sanctions," Maas added.
Nord Stream 2, which would transport gas from western Russia under the Baltic Sea to northern Germany, is slated to be opened within the coming months.

In draft legislation that passed a significant hurdle in the U.S. Congress this week, the pipeline is condemned as a "tool of coercion and political leverage" to weaken U.S. ties with Germany and Europe.

Ukraine has long protested the pipeline project amid concerns that it will lose crucial revenue for transporting Russian-sourced gas across its territory.

Kyiv asserts that Nord Stream 2 undermines current economic sanctions seeking to compel Russia to resolve a bloody conflict it started in eastern Ukraine, near the Russian border, and end its occupation of Ukraine's Crimea.

Ukraine is "grateful" for the votes in favor of sanctions against the pipeline, a "political project that undermines the energy security of Europe," the Ukrainian presidential administration said.

Prime Minister Oleksiy Honcharuk welcomed Congressional approval of the sanctions as "good news." The sanctions should "dramatically complicate construction of the Russian pipe," he said.

The U.S. bill seeks to impose sanctions on vessels engaged in pipe-laying. It also targets a Russian-Turkish gas pipeline, TurkStream, under the Black Sea, set to be opened next month.

Both Turkey and Germany are U.S. allies within the NATO military alliance.

The Nord Stream 2 company said it was "aware of the political debates and the U.S. Congressional initiative," but declined to further comment.

Proponents of Nord Stream 2 and TurkStream argue that the pipelines will strengthen Europe's energy security by increasing channels for transporting gas and lowering prices.