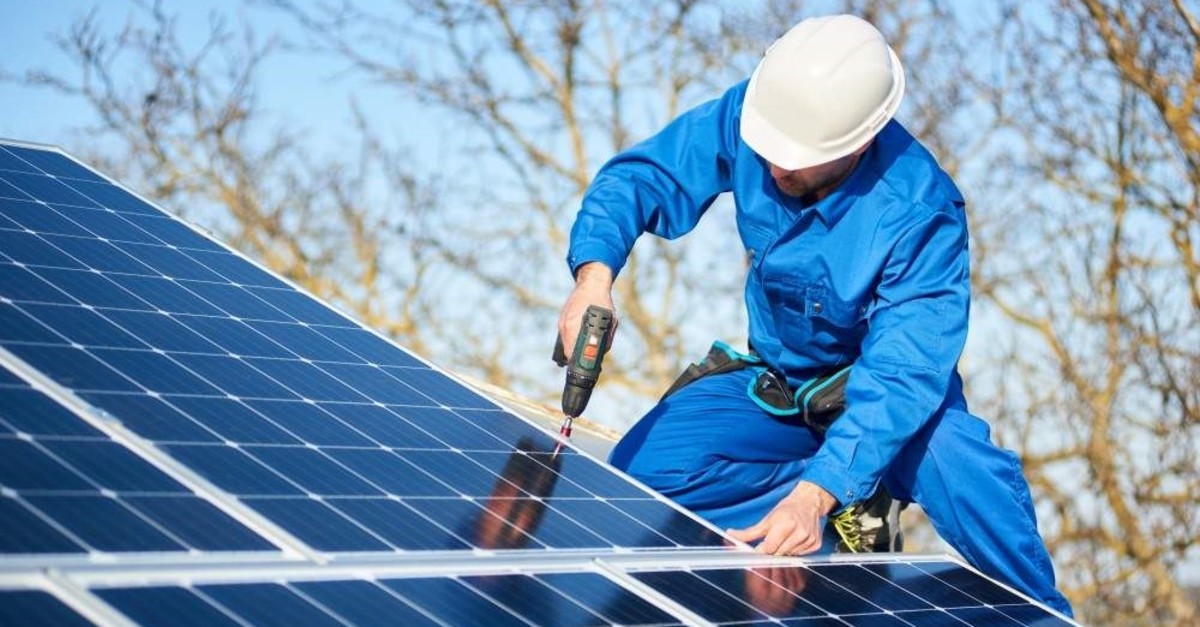 A World Bank report released in 2018 revealed that Turkey has a capacity to reach 4 GW in rooftop solar PV installation.
by Daily Sabah Dec 19, 2019 11:03 pm

Turkey can build on a new support scheme for rooftop solar applications by providing further incentives that would reduce payback periods to less than seven years now, and two years by 2030

A country with an average sunlight duration of 2,714 hours per year and 7.5 hours per day, Turkey currently has a solar power capacity of 6,200 megawatts (MW), considered much below its potential. In order to fully mobilize its solar capacity, the country continues to expand its solar power generation capacity with new plant projects and new incentives for the rooftop applications. Determined to widespread rooftop applications to increase solar power, Turkey is expected to reduce the payback duration in investments to two years by 2030, according to a recent report by the Institute for Energy Economics and Financial Analysis (IEEFA) released Thursday.
The IEEFA's new report titled, "New Incentives Brighten Turkey’s Rooftop Solar Sector," provides a closer look at Turkey's rooftop solar sector, revealing that the country is among the most abundant solar resources in Europe, far surpassing market leaders such as Britain and Germany.
Turkey has recorded a remarkable increase in solar power capacity over the last decade. Having almost no capacity in solar power in 2008, the country now ranks 6th in Europe and 12th in the world in the installed power capacity, Energy and Natural Resources Minister Fatih Dönmez said previously.
“Turkey is already one of the world’s fastest-growing markets for large-scale solar, and the government has now laid the foundations for similar growth in the rooftop market,” said IEEFA's energy finance analyst and report co-author Gerard Wynn.
The country is expected to add 10 gigawatts (GW) of solar capacity by 2024 of which 3.7 GW will derive from distributed systems, namely rooftops. As a result, solar power generation is due to increase by 198% between 2019 and 2024, according to the recent renewables report by the International Energy Agency (IEA).
Turkey has some of the best solar resources globally, with a national average solar photovoltaic output of about 1.6MWh/kWp annually, compared with Germany’s 1.1MWh/kWp per year. However, the report underscored that solar power contributed only 2.6% of the annual electricity consumption last year and the majority was supplied by imported coal and gas.
“The beauty of solar power for Turkey is that it exploits one of its most valuable energy assets, where it has a natural advantage over other countries along with the added bonus of trimming increasingly expensive coal imports. Turkey spent $4.4 billion on coal imports in 2018, up 12% on the previous year,” said IEEFA energy finance analyst and report co-author Gerard Wynn.
New incentive plan
The new metering plan that Turkey introduced in May allows homeowners to receive a monthly credit for solar exports to the grid, where they use to offset their electricity bill. “The new program replaces a previous, ineffective net metering scheme, and complements feed-in tariffs that end up benefiting much larger installations than solar rooftops for individual consumers. In other words, the new approach can mark the beginning of a largescale, rooftop solar market in Turkey,” the IEEFA report said.
Steps to bring rooftop solar within the reach of mainstream consumers could include eliminating the value-added tax on solar installations to reduce upfront costs, removing the fixed fee for obtaining government approval and subsidizing the cost of borrowing to install solar panels, for example by attaching loan repayments to a mortgage or utility bill and raising the level of support for solar exports to the grid at rates comparable to those seen in other European countries.
In a striking finding, the IEEFA report demonstrates that the new incentives increase payments for exports of solar power to the grid, reducing payback periods by more than a quarter, to 11 years for new projects today, seven years in 2025, and 4.5 years in 2030.
“At the moment, we estimate an 11-year pay-off period is needed to cover the upfront costs for a typical solar installation. That is a great improvement over the estimated 16-year payback period under the previous scheme,” said Wynn. “Households will be up for this technology, but first, they will need a little more financial incentive,” he added.
The further steps that Turkey take, the report outlines, to better capitalize on this potential include eliminating the value-added tax on solar installations to reduce upfront costs, removing the fixed fee for obtaining government approval, subsidizing the cost of borrowing to install solar panels, raising the level of support for solar exports to the grid at rates comparable to those seen in other European countries.
“We conclude that while Turkey’s new net metering program marks a significant and welcome step forward in developing its residential solar market, further incentives, such as reducing installation costs, would drive faster household adoption in the near term,” said Bengisu Özenç, economics consultant and report co-author.
The mainstream application of the rooftop technology will render consumers into producers – the fall in the prices of solar power costs highlights the continuity of this trend, Özenç remarked.
“The evolution of subscribers into power generators will also compel grid operators to reassess their income-expenditure balances. They have to readjust the electricity pricing trends to the changing market structure in due consideration of the whole market,” she explained.
Turkey's Energy and Natural Resources Minister Fatih Donmez announced last week that after the new plan, there were applications made for the installation of 443 megawatts of rooftop solar over the last five months.
"Some 696 industrial institutions applied to build rooftop plants corresponding to 432 megawatts while 1,187 residential rooftop applications have been set. As there is a 10-kilowatt limit for residential rooftop deployment, these applications correspond to 11 megawatts of installed capacity. In total, both reach up to 443 megawatts," he said.
According to a World Bank report released last year, Turkey has the capacity to reach 4 GW in rooftop solar PV installation.
Last Update: Dec 20, 2019 2:31 am
RELATED TOPICS