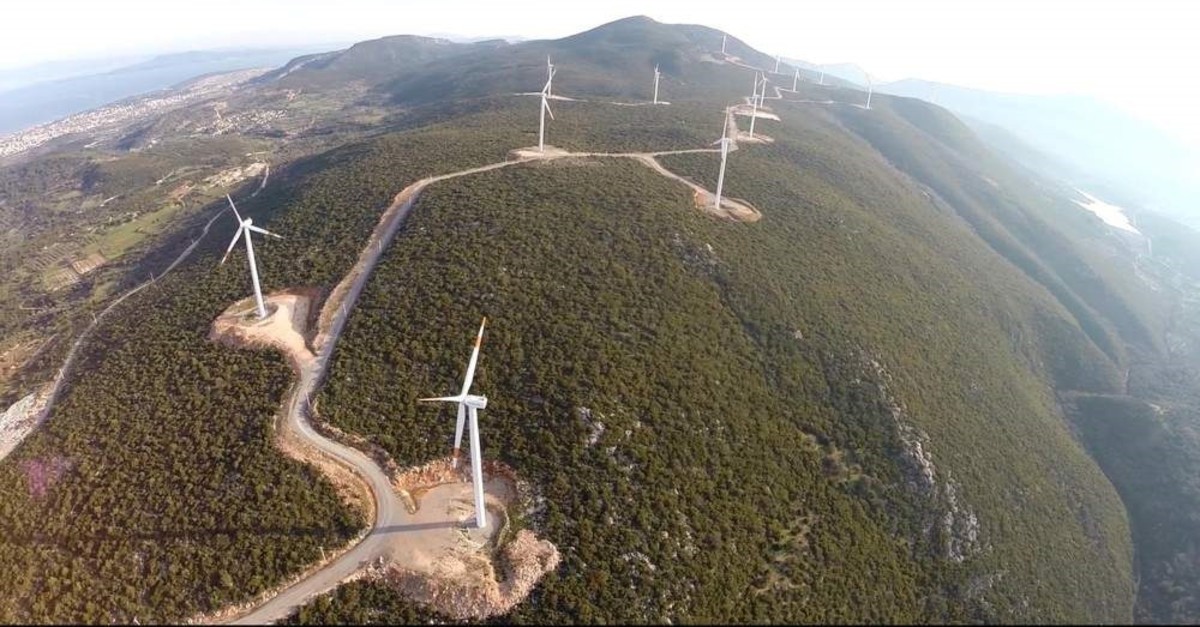 With the new tariff plan, Turkish electricity consumers will be able to fully utilize renewable sources in accordance with the commitment to reduce carbon emissions in power generation. (DHA Photo)
by Elif Binici Erşen Dec 20, 2019 5:53 pm

Turkish electricity consumers, whether corporate or individual, will have a chance to meet their demand purely from renewable resources thanks to a new tariff scheme that will be launched soon

The global trend to ensure carbon-free electricity generation has been one of the main items on Turkey's energy agenda for the last couple of years, forcing the country to ramp up its renewable capacity. As part of the policy to embrace that trend, Turkey's energy ministry is preparing a new tariff scheme for consumers who want to use renewable resources to supply their electricity, Energy and Natural Resources Fatih Dönmez announced Friday.

"We have launched works to introduce a new tariff program for Turkish consumers who want to utilize renewable energy resources in their electricity consumption. The new tariff model will allow the consumers to solely use renewable resources if they wish," Dönmez said in his address at the launch of the 10th Sabancı University Istanbul International Center for Energy and Climate Conference for the International Energy Agency's World Energy Outlook 2019.

Although the details of the subsidized model for the new scheme are yet to be disclosed, the ministry is expected to propose a certificate to be issued by electricity authorities to measure how much consumers utilize renewables in their electricity consumption. The new tariff scheme will also enable consumers to choose suppliers whose energy portfolios consist entirely of renewable resource plants.

With the effort to encourage electricity consumers to meet their demand from renewables and offer them the opportunity to become producers, Turkey also introduced a new metering scheme in May, which allows homeowners to receive a monthly credit for solar exports to the grid, which can be used to offset their electricity bill. The program replaces a previous net metering scheme and complements feed-in tariffs that end up benefiting much larger installations than solar rooftops for individual consumers. The plan is expected to launch a large-scale growth in rooftop solar photovoltaic (PV) applications. According to a World Bank report released last year, Turkey has the capacity to reach 4 GW in rooftop solar PV installation.

Turkey has a diverse energy basket when it comes to electricity generation, yet coal is still the top source of power generation. In 2018, coal accounted for 37.3% of the total production. Electricity generation from natural gas and hydroelectric power totaled 29.8% and 19.8%, respectively. Wind power plants generated 6.6% of Turkey's electricity, while solar power provided 2.6%.

In his presentation at the conference, IEA Executive Director Fatih Birol drew attention to a wide range of disparities in the global energy markets. He said that an interesting development in the oil market is the relatively serene environment despite a number of incidents that fueled geopolitical tensions throughout the year. Birol stressed that geopolitical tensions, particularly in the Middle East where the biggest producers are clustered, used to be a major reason behind the changes or fluctuations in the prices.

In reference to major developments throughout this year, Birol said: "Venezuela's oil production has seen a steep fall this year. Iran's crude exports have nearly become zero because of the sanctions. Saudi Arabia had a major attack on Saudi Arabian Oil Co. (Aramco) facilities. Despite all these problems, the oil prices remained around $60 per barrel. After the meeting of the Organization of the Petroleum Exporting Countries (OPEC), no major change has occurred in the prices. Since the oil production in OPEC and Russia continues to increase, their capability to dictate and shape the prices has shrunk."

Another major disparity has been observed in the issue of climate change – to which there is a global commitment. The energy industry still accounts for 80% of global emissions. Although countries pledged to reduce the emissions at the Paris Climate Summit in 2015, the carbon and greenhouse gas emissions have continued to rise steadily, increasing 1 gigaton. "The global carbon emissions have reached historic highs," Birol remarked. While there is a serious political commitment to reducing emissions, the current reality of the increase demonstrates considerable divergence, he added.

In the period of 2009 to 2018, emissions rose by 1.5% per year, with only the years 2014-2016 showing a slight slowdown. Preliminary data for 2018 suggests that global greenhouse gas emissions grew by 1.9%," according to the Climate Change Performance Index (CCPI).

The European Commission's Joint Research Center 2019 report on global carbon emissions revealed that the world's two largest economies, the U.S. and China, account for the highest emissions as they are responsible for more than 40% of the global emissions. Before the Industrial Revolution, levels of atmospheric carbon were around 280 parts per million (ppm). By 2013, that level had breached the 400ppm mark for the first time.

There are huge disparities between the world's top 15 carbon emissions generating countries. China creates almost double the emissions of the second-placed U.S.

Moreover, the global developments in energy efficiency presented another contradiction of the markets. "Efficiency improvements posted the lowest increase in 2018. The 1.2% rate in 2018 is around half the average seen since 2010 and remains far below the 3% rate that would be needed," Birol said.