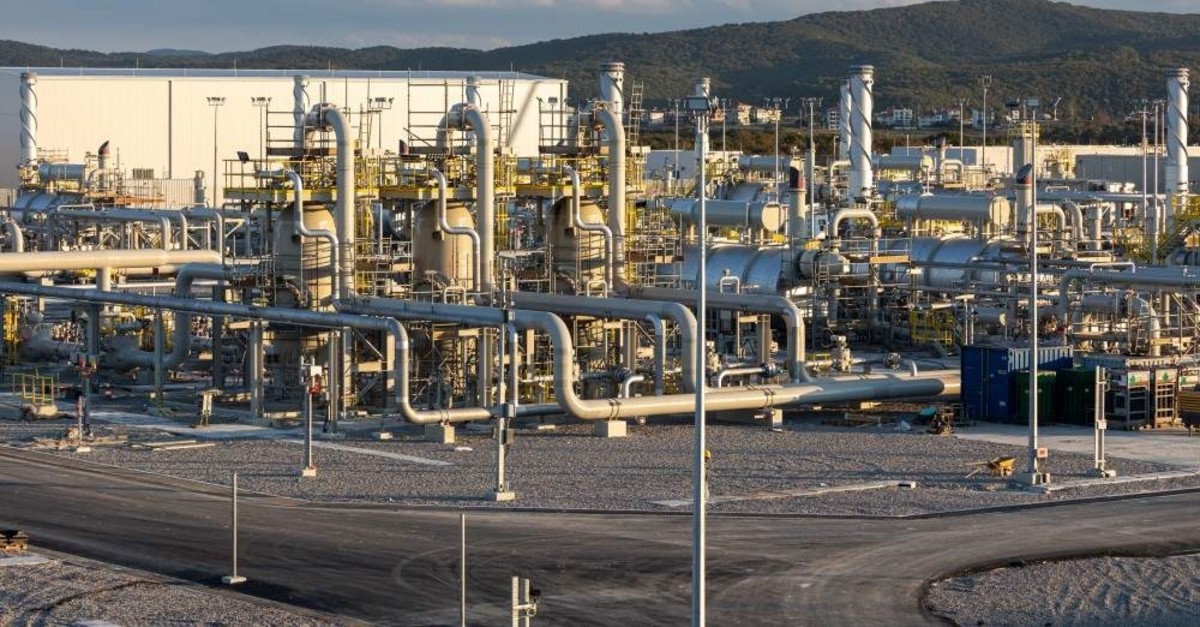 by Daily Sabah Jan 06, 2020 6:22 pm
Turkey and Russia are set to witness a major milestone in their relations on Wednesday in line with the inauguration of the TurkStream natural gas pipeline project, which will transmit Russian natural gas to Turkey and Europe under the Black Sea.

The ceremony in Istanbul will be attended by President Recep Tayyip Erdoğan, appearing alongside Russian counterpart Vladimir Putin. Besides the launch of the project, the two leaders will take the opportunity to discuss bilateral as well as regional issues. They are expected to deliver a message of regional stability and cooperation at the opening ceremony.

The TurkStream project will see deliveries of natural gas from Russia pumped to European markets via a subsea pipeline linking to Turkey via the Black Sea. The pipeline begins on the Russian coast near the town of Anapa from where it runs over 930 kilometers through the Black Sea to emerge ashore on the Turkish coast in the Thrace region, near the town of Kıyıköy.

It consists of two pipelines that will have a total supply capacity of 31.5 billion cubic meters (bcm), corresponding to the annual energy demand of 15 million homes.

Turkey will receive 15.75 bcm of gas, with the remainder going on to southeastern Europe. The second line would run from Turkey through Bulgaria, then on to Serbia, Hungary and Slovakia. The second section is expected to be completed in 2020.

The two-line project has already been loaded with gas and was initially conceived to replace, or at least diminish, gas flow through the Trans-Balkan Pipeline (TBP), which had been transferring Russian gas to Turkey and Europe via Ukraine.

Russia has launched gas deliveries through the TurkStream pipeline set to move onto to Bulgaria, Greece and North Macedonia through the new entry point at the Bulgaria-Turkey border, Bulgaria's Bulgartransgaz said Sunday.

Russian gas producer Gazprom started shipping around 3 bcm of gas to Bulgaria via TurkStream on Jan. 1, replacing a route that formerly passed through Ukraine and Romania. Gazprom shipped about 3 bcm to Greece and about 500,000 million cubic meters to North Macedonia via the route last year.

Already having launched the Trans Anatolian Natural Gas Pipeline (TANAP) – which delivers natural gas from Azerbaijan through Turkey and on to Greece, the first stop in its European leg, the Trans Adriatic Pipeline (TAP) – Turkey, together with the TurkStream pipeline looks to play a key role in securing Europe's gas supply.

According to experts, TurkStream will make Turkey the first receiver of natural gas and will thus remove transit risks. They emphasize that potential instability in the region will not create any adverse effects on Turkey's natural gas supply after the completion of TurkStream. In addition, they say, TurkStream "bypasses" countries between Turkey and Russia.
RELATED TOPICS