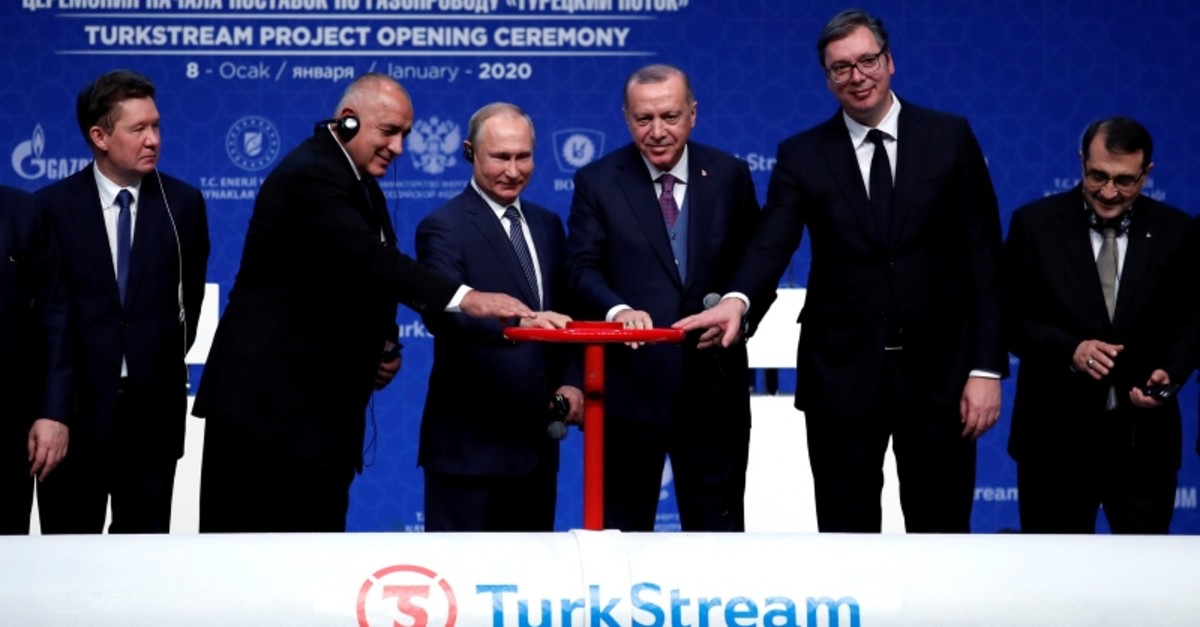 Inaugurated in a grand ceremony in Istanbul, TurkStream has created an alternative route for Russian gas to reach European markets, bypassing the transit through Ukraine, with the aim to contribute to the regional supply security

The 33-year-long energy cooperation between Ankara and Moscow has been cemented once again with the inauguration of the TurkStream natural gas pipeline at a ceremony attended by President Recep Tayyip Erdoğan and his Russian counterpart Vladimir Putin in Istanbul Wednesday.

Described as the epitome of the energy cooperation between Turkey and Russia by the leaders of the two countries, TurkStream aims to provide uninterrupted and direct gas supply to Turkey and southeastern European countries from Russia. "TurkStream, into which we have put a lot of labor together with our Russian friends, is a project of a historic nature for Turkish-Russian bilateral relations and for the regional energy map," Erdoğan said during his address at the inauguration ceremony.

"Over the past 33 years, we have provided 400 billion cubic meters of natural gas from Russia. This figure is the epitome of Turkish-Russian cooperation based on a mutual win-win principle," he added.

Turkey began importing Russian gas in 1987 after the construction of the Trans-Balkan Pipeline (TBP) which delivers gas through Ukraine. While Gazprom's exports to Turkey via TBP amounted to 10.7 billion cubic meters (bcm) in 2018, Turkey barely imported any Russian gas through TBP last year as it mainly used the Blue Stream pipeline.

While the first leg of TurkStream, operating at a capacity of 15.75 bcm, delivers Russian gas to the Turkish network, the second leg is aimed for European markets, particularly southeastern European countries, namely, Bulgaria, Greece, North Macedonia, Serbia and Hungary.

Turkey's Petroleum Pipeline Corporation (BOTAŞ) built the first line that will connect to Turkey's existing gas grid, while the second line, to be operated by a Gazprom-BOTAŞ joint venture, will stretch to the Turkish-European border in Turkey's Thrace region.

TurkStream is due to cut 19 bcm from the transit line through Ukraine and is likely to make an additional cut of 12 bcm per year once it begins operating fully. Flows through Austria's Baumgarten should remain unchanged, as gas diverted through TurkStream II will still enter Austria from Hungary.

The recently renewed agreement that the TPB will transfer 65 bcm of gas in 2020 and 40 bcm in the period from 2021-2024 shows that Russia has made its calculations in line with the expectations that Nord Stream 2 and TurkStream will operate at full capacity, 55 bcm for the first pipeline and 31.5 bcm for the second, while retaining a transit of 40 bcm through Ukraine.

Drawing attention to the importance of the project for the gas supply security of the European markets, Erdoğan also noted that European countries show high interest in the Russian gas that will flow through the second line of TurkStream.

Sunday, Bulgartransgaz CEO Vladimir Malinov announced that Russian gas deliveries to Greece and North Macedonia have begun through the new entry point at the Turkish border. Russian gas producer Gazprom started shipping about 3 billion bcm of gas to Bulgaria via TurkStream on Jan. 1, replacing a route that formerly passed through Ukraine and Romania. Gazprom shipped about 3 bcm to Greece and about 500,000 mcm to North Macedonia via that route last year.

To highlight Turkey's significance for the regional energy projects, Erdoğan stressed that the country has instituted an infrastructure to offer significant natural gas supply capacity and become an energy trading hub for its region thanks to investments in recent years.

With floating storage units, storage facilities and a vast network of pipeline networks, Turkey has emerged as the most developed energy market in its region, ranking fourth in Europe. In a bid to become the regional trading hub, it also launched a gas trading market in September 2018 under the Energy Stock Exchange (EPİAŞ). Yet, more liberalization of the market with private players, unbundling of contracts and expansive storage capacity are necessary for Turkey to develop into a fully functioning gas trading hub.

Also speaking at the inauguration ceremony, Putin said the cooperation between Russia and Turkey is developing in all areas, despite efforts to prevent it.

"TurkStream is an extremely important and unique gas transfer system that will help boost cooperation even more," the Russian president remarked.

"The successful realization of TurkStream shows the remarkable outcomes of Turkish-Russian strategic partnership," Putin said, noting that the Russian gas transport to Europe via Turkey will ensure energy supply security in southeastern European countries and positively impact their economies.

In his remarks on the project, Russian Energy Minister Alexander Novak said: "This is a pioneering and unique project. It will not only secure Turkey's energy market but also south and southeastern Europe."

Energy and Natural Resources Minister Fatih Dönmez called the project visionary and "a new symbol of cooperation between Turkey and Russia."

He said the pipeline is a "win-win-win project" for Russia, Turkey and millions of people in Europe while providing stability to the region and sustainability for energy markets.

"For centuries, the Anatolian region has been home to many significant trade routes. In the 21st century, Anatolia will connect east and west through energy," Dönmez said.

Russian energy giant Gazprom CEO Alexey Miller had announced in December 2014 that Putin canceled the construction of the South Stream pipeline that planned to carry Russian gas to Europe via Bulgaria.

After its termination, Putin said Gazprom agreed to build a natural gas pipeline to Turkey, bypassing Ukraine and naming the project the Turkish Stream, later to be known as TurkStream.

In an elaboration on the long-established Turkish-Russian ties, Erdoğan also noted that the history of the countries' bilateral relations dates back over 500 years ago. "We know that the cooperation between the two deep-rooted states in the Eurasian region brings positive results for our nations and the region," he indicated.

Speaking on commercial ties, Erdoğan reiterated the joint goal to reach $100 billion in Turkish-Russian bilateral trade. "The bilateral trade hovered around $300 to $400 million in the 1980s," Erdoğan said, stressing that trade with Russia has been on a rising trend for the last three years. Last year, Turkey's exports to Russia totaled $3.9 billion with a rise of 11.7%, according to the data of the Turkish Exporters' Assembly. In 2018, Turkish exports to Russia were calculated at $3.4 billion while imports totaled $21.9 billion. Erdoğan also noted that the value of the projects undertaken by Turkish contractors in Russia has reached $75 billion.

"Turkey, which has the longest shoreline in the Eastern Mediterranean, will of course have a say in any project related to this region," Erdoğan added.

The president once again called on all the riparian states in the Eastern Mediterranean and said, "Let us turn the Mediterranean, which has been the cradle of civilizations throughout history, into a field of cooperation, not conflict."

Last week, Greece, Israel and the Greek Cypriot administration signed an agreement for the EastMed project to build a 1,900-kilometer natural gas pipeline that will run from Israel through Greek Cyprus, Crete, Greece and ultimately to Italy.

During his meeting with Putin Wednesday, Erdoğan presented his Russian counterpart a bilingual book titled "Strategic Step in the Eastern Mediterranean Equation: Memorandum of Understanding between Turkey and Libya."

The book explains Turkey's policy in the Eastern Mediterranean and the unlawful steps taken by the European Union, the Greek Cypriot administration and Greece. The book evaluates the maritime delimitation agreement between Turkey and Libya from political, legal and economic perspectives and elaborates on the potential outcomes of the deal. On Nov. 27, Turkey and Libya's Tripoli-based Government of National Accord (GNA) signed the bilateral memorandum after a meeting between President Erdoğan and GNA head Fayez Al Sarraj, which took place in Istanbul. The deal enables Turkey to secure its rights in the Mediterranean while preventing any fait accompli maneuvers by other regional states.

Regional actors, primarily Greece and Egypt, vehemently criticized the deal and filed a petition to the U.N. against Turkey. Greece went even as far as to expel its Libyan envoy Mohamed Younis AB Menfi in response.