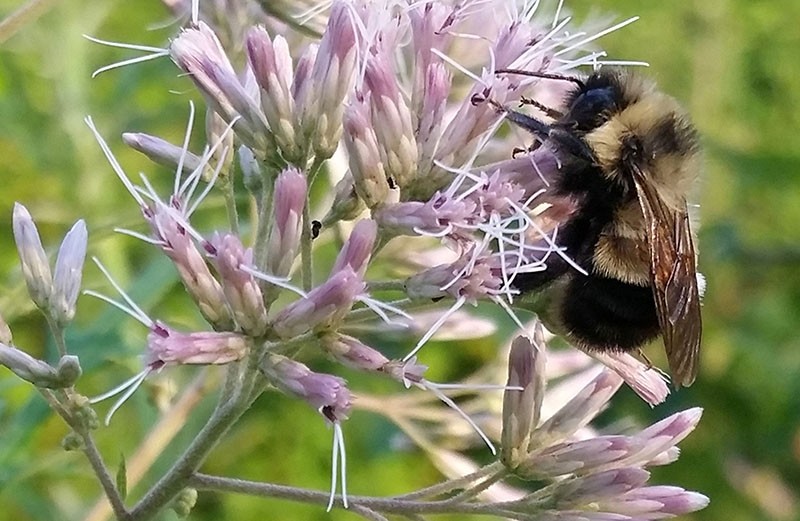 A rusty patched bumble bee which the U.S. Fish and Wildlife Service proposed listing for federal protection as an endangered species is pictured in Madison, Wisconsin, U.S. August 7, 2015. (Reuters Photo)
by Compiled from Wire Services
Jan 12, 2017 12:00 am

US officials for the first time have placed a bee found in the continental United States on the endangered species list.

Authorities said Wednesday the move was taken after a precipitous decline in the rusty patched bumblebee population, due to pesticides, disease and climate change.

These once common bumble bees are now "balancing precariously on the brink of extinction," said a statement from the U.S. Fish and Wildlife Service.

"Abundance of the rusty patched bumble bee has plummeted by 87 percent, leaving small, scattered populations in 13 states and one province," down from 28 states in the 1990s.

The final rule listing the rusty patched bumble bee as endangered appeared in the January 11 edition of the Federal Register and takes effect on February 10.

Bumble bees, as distinguished from domesticated honey bees, are essential pollinators of wildflowers and about a third of all U.S. crops, from blueberries to tomatoes, according to the Xerces Society for Invertebrate Conservation, which petitioned the government for protection of the insect.

Pollination services furnished by various insects in the United States, mostly by bees, have been valued at an estimated $3 billion each year.

The International Union for the Conservation of Nature ranks the rusty patched as one of 47 species of native U.S. and Canadian bumble bees, more than a quarter of which face a risk of extinction.

Government scientists point to a certain class of pesticides called neonicotinoids - widely used on crops, lawns, gardens and forests - as posing a particular threat to bees because they are absorbed into a plant's entire system, including leaf tissue, nectar and pollen.

Bumble bee populations may be especially vulnerable to pesticides applied early in the year because for one month an entire colony depends on the success of a solitary queen that emerges from winter dormancy, the wildlife service said.

Listing under the Endangered Species Act generally restricts activities known to harm the creature in question and requires the government to prepare a recovery plan. It also raises awareness and helps focus conservation planning for the imperiled species.

Late last year, seven types of bees found in Hawaii became the first to be placed on the US federal list of endangered and threatened species.

The yellow faced or yellow masked bees have become endangered because of a loss of habitat in Hawaii, among other factors, wildlife experts said.