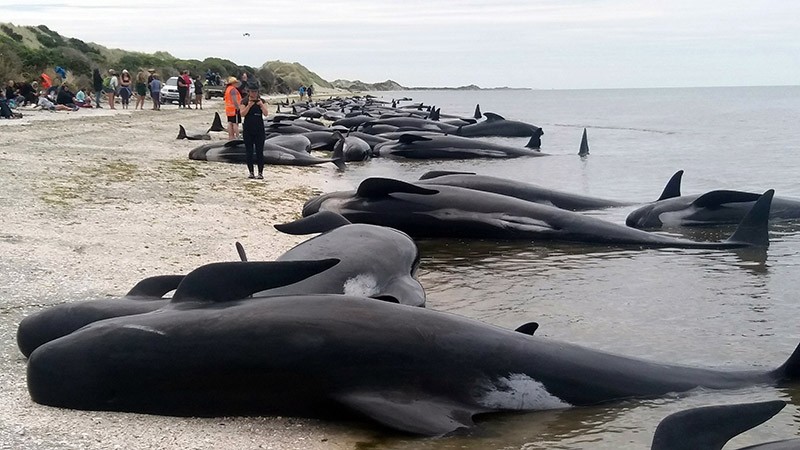 Volunteers worked to keep as many as 90 re-stranded pilot whales comfortable on Friday evening on a remote New Zealand beach, after a mass stranding left as many as 300 of the
creatures dead.

An effort to refloat about 130 whales earlier in the day had only partial success, with about 50 whales seen swimming in the bay off Farewell Spit, on the country's South Island. The rest returned to shore.

A total of 416 whales had been beached overnight, in one of the biggest mass stranding in recent history, and between 250 and 300 died before they were discovered, according to the country's
Department of Conservation (DOC).

"It is terribly sad to see these magnificent creatures in this state and distressing and traumatic for the volunteers to see the hundreds of dead whales on the beach," Conservation Minister Maggie Barry said in a statement.

The beached whales would be kept comfortable with the help of volunteers until dark, DOC ranger Kath Inwood said. Work would not continue overnight, however, as it is unsafe for people to be close
to the whales in the dark.

If necessary, a second attempt to refloat the stranded whales will take place on Saturday.

Earlier Friday, in a refloating attempt, a human chain was formed as a barrier between the whales and the beach to deter the animals from re-stranding, Inwood told dpa.

Peter Wiles was among the first of more than 500 people who showed up after whale rescue organization Project Jonah called for volunteers, local website Stuff reported. He said the water's edge was lined with whale carcasses, with more floating on the incoming tide.

"It is one of the saddest things I have seen, that many sentient creatures just wasted on the beach," Wiles said.

According to the DOC, Friday's was the third largest recorded whale-stranding in New Zealand since the start of data collection in the 1800s. Some 1,000 whales were stranded on the Chatham Islands in
1918 and 450 in Auckland in 1985.

Project Jonah said there is no one single reason why whales become stranded, and possible explanations range from disease to extreme weather.

Part of the problem is that Farewell Spit reaches so far out into Cook Strait, local experts say.

The whales are "swimming along, then the next thing they know the water literally runs out from underneath them," Jochen Zaeschmar, a marine biologist, told Stuff.

Pilot whales rely heavily on sonar for their navigation, and the sandy and muddy beaches on Farewell Spit provide poor echoes, giving whales the impression that they are still in deep water.

Pilot whales are also highly sociable. "It only takes one to get into trouble, then the others all try to help," Zaeschmar said.

Farewell Spit is the country's largest sand spit, stretching for 32 kilometers from the northwest tip of the South Island.