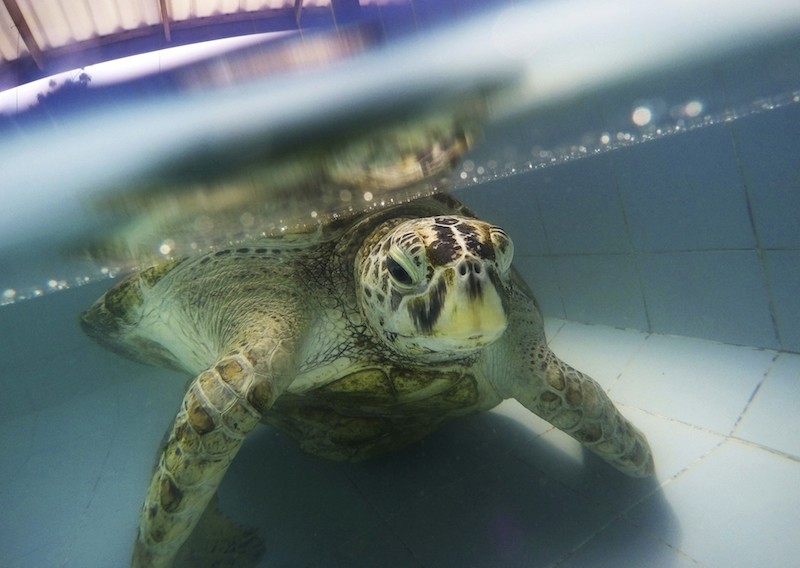 Bank, a 25-year-old sea turtle who swallowed nearly a thousand coins tossed by tourists died Tuesday, March 21, two weeks after having surgery to remove the coins from its stomach. (AP Photo)
by Associated Press
Mar 21, 2017 12:00 am

A sea turtle who had swallowed almost one thousand coins that had been thrown by luck-seeking tourists died Tuesday in Thailand, two weeks after a landmark surgery that removed the coins from its stomach.

The cause of death was blood poisoning from the loose change, said Dr. Achariya Sailasuta, a professor at the veterinary faculty at Bangkok's Chulalongkorn University.

"She at least had the chance to swim freely and eat happily before she passed," said Dr. Nantarika Chansue, who removed 5 kilograms (11 pounds) of coins from the turtle's stomach in an hours-long operation on March 6.

The 25-year-old turtle, nicknamed Bank, appeared to be doing well after the operation, but a checkup Saturday revealed problems with its intestines. Doctors performed a second operation, but Bank never woke up and died Tuesday morning.

Bank lived in a public pond in Chonburi province, about 175 kilometers (110 miles) southeast of Bangkok. The turtle swallowed 915 coins that tourists had thrown into the pond. Eventually, the money formed a weight that cracked Bank's shell.