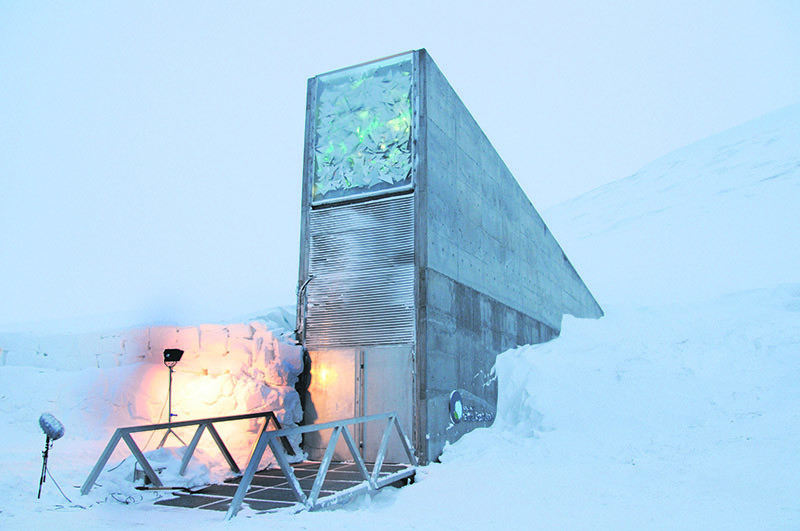 Norway is repairing the entrance of a "doomsday" seed vault on an Arctic island after an unexpected thaw of permafrost let water into a building meant as a deep freeze to safeguard the world's food supplies.

The water, limited to the 15 meter (50 ft) entrance hall in the melt late last year, had no impact on millions of seeds of crops including rice, maize, potatoes and wheat that are stored more than 110 meters inside the mountainside.

Still, water was an unexpected problem for the vault on the Svalbard archipelago, about 1,000 km (620 miles) from the North Pole. It seeks to safeguard seeds from cataclysms such as nuclear war or disease in natural permafrost.

"Svalbard Global Seed Vault is facing technical improvements in connection with water intrusion," Norwegian state construction group Statsbygg, which built the vault that opened in 2008, said in a statement on Saturday.

"The seeds in the seed vault have never been threatened."

Spokeswoman Hege Njaa Aschim said Statsbygg had removed electrical equipment from the entrance - a source of heat - and was building waterproof walls inside and ditches outside to channel away any water.

The number of visitors would be reduced to limit human body heat, she said. Some of the water that flowed in re-froze and had to be chipped out by workers from the local fire service.

An underlying problem was that permafrost around the entrance of the vault, which had thawed from the heat of construction a decade ago, has not re-frozen as predicted by scientists, Aschim said.

Temperatures in the Arctic region have been rising at twice the global average in a quickening trend that climate scientists blame on man-made greenhouse gases. Svalbard has sometimes had rain even in the depths of winter when the sun does not rise.

"There's no doubt that the permafrost will remain in the mountainside where the seeds are," said Marie Haga, head of the Bonn-based Crop Trust that works with Norway to run the vault. "But we had not expected it to melt around the tunnel."

Haga said the trust had so far risen just over $200 million towards an $850 million endowment fund to help safeguard seeds in collections around the globe. "That is an extremely cheap insurance policy for the world," she said.

There are 1,700 gene banks around the world that safeguard collections of food crops and many of these are exposed to natural disasters and wars, according to the independent Global Crop Diversity Trust.

The Svalbard vault was opened in 2008 with the aim to provide a "fail-safe seed storage facility, built to stand the test of time and the challenge of natural or man-made disasters," the organization says on its website.

Each country that deposits the seeds into the vault have control and access to their own material.