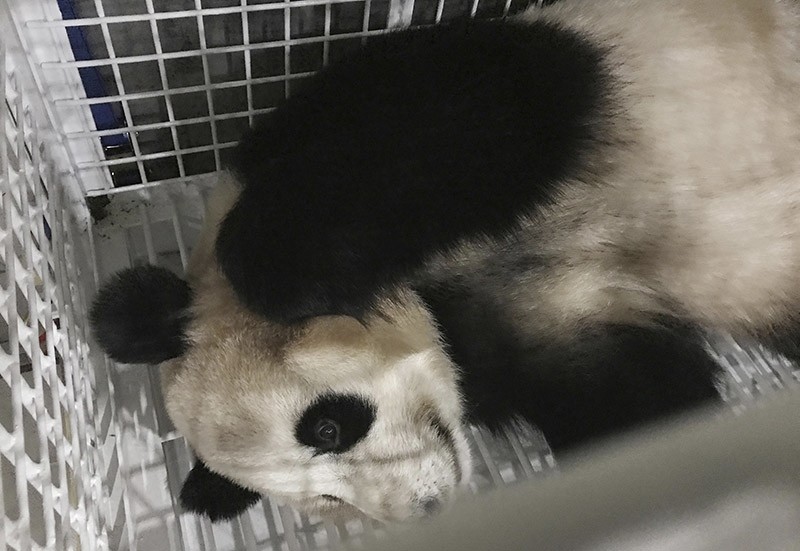 In this Monday, June 5, 2017 photo released by Xinhua News Agency, giant panda named ,Yang Bang, is in a cage after arriving at the Chengdu Shuangliu International Airport in Chengdu, in southwestern China's Sichuan Province. (AP Photo)
by Associated Press Jun 06, 2017 12:00 am

Three giant pandas born and raised in Japan have returned to China under a standard agreement to improve the breeding success of the rare animals.

The 6-year-old twins and their 4-year-old sister had been living at Wakayama Adventure World in southern Japan.

The three arrived Monday night in the city of Chengdu, the capital of Sichuan province that is home to most wild pandas, as well as sanctuaries and breeding centers.

The official Xinhua News Agency said the three were traveling Tuesday to the Chengdu Research Base of Giant Panda Breeding where they will be quarantined for a month while they acclimatize to their new home before being displayed to the public.

"They are expected to adapt to changes in food, environment, language, and even the taste of bamboo. We will perform health checks on the pandas," Yang Zhi, a disease prevention expert with the center, was quoted as saying by Xinhua.

Wakayama Adventure World and the Chengdu base have been cooperating on panda breeding research since 1994. The program has led to the births of 15 pandas, eight of whom have now returned to China, according to Xinhua.

Around 420 pandas live in captivity, the majority within China, while an estimated 1,864 live in the wild.

China for decades gifted friendly nations with its unofficial national mascot in what was known as "panda diplomacy." The country more recently has loaned pandas to zoos on commercial terms.