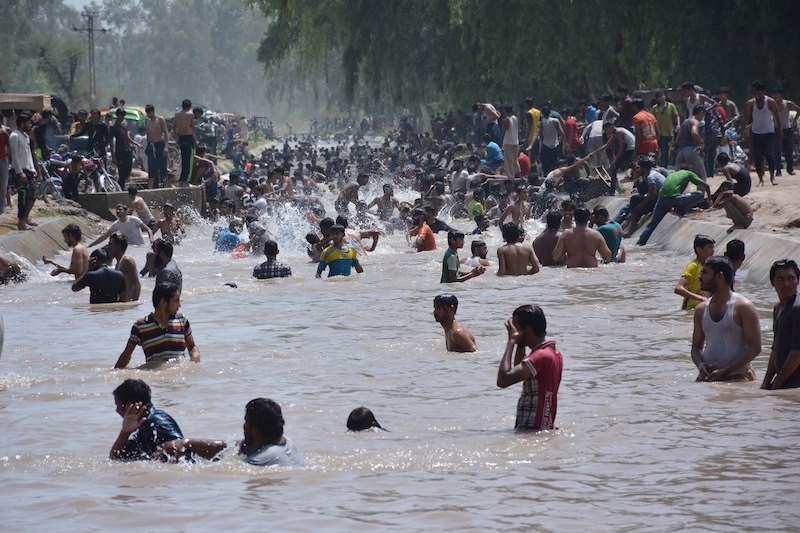 Pakistan is currently in the grip of a severe heatwave where temperatures went up to 53 degrees Celsius in Turbat area of Balochistan, breaking the record of the highest recorded temperature during summer in the country. EPA Photo
by Daily Sabah Jun 20, 2017 12:00 am

Approximately 30 percent of the world's population is already exposed to potentially deadly heat for 20 days a year, and high temperatures may threaten 75 percent of the population by the start of the 22nd century, a study published in the journal Nature Climate Change said.

The prediction is based on a scenario in which greenhouse gas emissions like CO2 are not drastically reduced in the coming decades.

However, even if humanity were to cap global warming at the level required by the Paris Agreement - two degrees Celsius (3.6 degrees Fahrenheit) - half of the world's population would still be exposed to deadly heat, lead author of the study Camilo Mora has said.

The scientists behind the study point out that deadly heat waves are a much bigger problem than most people imagine, pointing to the Moscow heat wave of 2010, which killed 10,000 people, and the 2003 European heat wave that killed around 70,000.

Mora documented over 100,000 deaths from high temperatures since 1980, adding that the figure is likely much higher due to areas that did could not provide substantive data.

The study's findings coincide with temperature records in much of the U.S., with figures of 106, 105 and 103 in Santa Rosa, Livermore and San Jose, California Sunday.

Turbat in Pakistan saw temperatures of 128 degrees (53.5 degrees Celsius) in late May, which scientists say could be the hottest reliably measured temperature on Earth.

Mora and fellow scientists have created an interactive global map that runs computer simulations based on previous heat waves, predicting how frequent these will become determined on the level of CO2 pollution in future.

Under the expected CO2 levels for 2100, Central and South America, central Africa, India, Pakistan, much of Asia, Australia and the eastern and southeastern U.S. will have a significant number of deadly heat days every year.