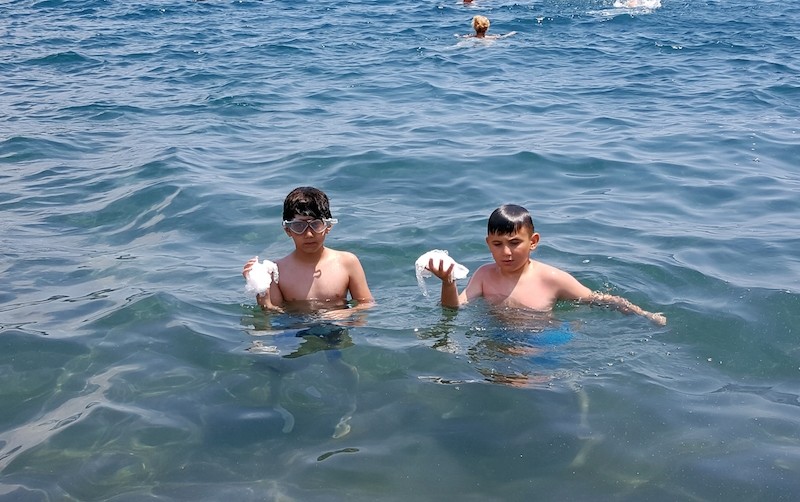 Students in the Köyceğiz district of western Turkey's Muğla province have collected plastic bags from the sea so that loggerhead sea turtles do not mistake them for edible jellyfish.

A total of 87 students and 10 teachers from five schools in the area were present at a Science and Nature Camp, held at a recreational area in Köyceğiz.

The loggerhead sea turtles sometimes mistake plastic bags for jellyfish, which they can swallow, often dying as a result.

Students from the five schools took action to save the turtles from the threat by diving into the water of Köyceğiz Lake, Dalyan Channel and the Marmaris shore and collecting plastic bags.

Professor Yakup Kaska from the Sea Turtles Research Rescue and Rehabilitation Center (DEKAMER) explained that plastic bags that had been thrown into the sea were one of the greatest dangers to sea turtles.

Loggerhead sea turtles eat jellyfish, as well as crabs, horseshoe crabs, other mollusks and shrimps, Kaska said. "Many loggerheads choke and die because of this. There's a great duty and responsibility on all individuals to protect these creatures. Our protection efforts should create awareness among the future generations as well," he added.

Kaska stressed that individuals must be more vigilant in ensuring that their plastic waste does not enter the sea and endanger the creatures living there.

There are approximately 20 sites worldwide where loggerhead turtles nest and lay their eggs, from which the young turtles then crawl back into the sea en masse.

Dalyan is one of the most significant nesting sites for loggerheads, and the beach is sealed off during the day from May to September so as not to disturb the turtle nests.

The Dalyan area is also a major tourist draw, hosting almost one million visitors every year.