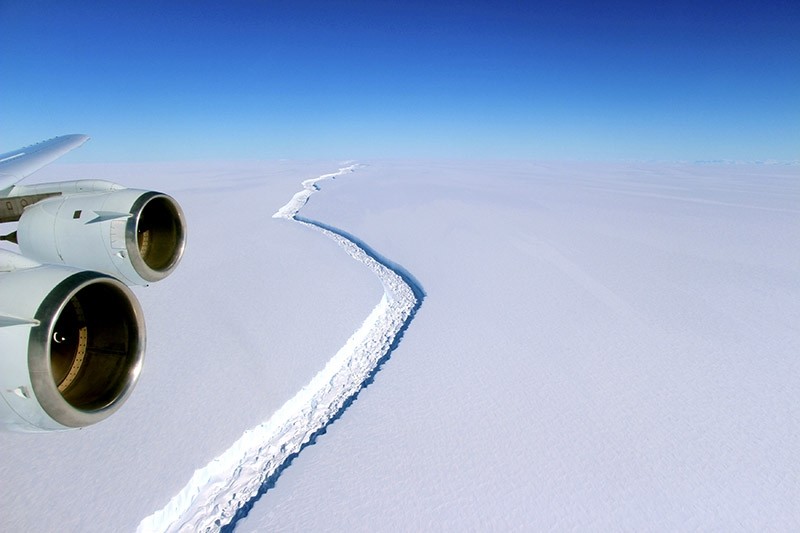 A rift across the Larsen C Ice Shelf that had grown longer and deeper is seen during an airborne surveys of changes in polar ice over the Antarctic Peninsula from NASAu2019s DC-8 research aircraft on November 10, 2016. (Reuters Photo)
by Compiled from Wire Services Jul 12, 2017 12:00 am

A trillion-ton iceberg, one of the largest ever recorded, has snapped off the West Antarctic ice shelf, scientists who have monitored the growing crack for years said on Wednesday.

"The calving occurred sometime between Monday, July 10 and Wednesday, July 12, when a 5,800-square kilometer (2,200-square mile) section of Larsen C (ice shelf) finally broke away," the Swansea University said in a statement.

The massive ice cube, larger than the US state of Delaware, has a volume twice that of Lake Erie, one of the Great Lakes. It is about 350 meters (1,100 feet) thick.

"The iceberg weighs more than a trillion tons, but it was already floating before it calved away so has no immediate impact on sea level," the team said. It will likely be named A68.

With the calving, the Larsen C ice shelf lost more than 12 percent of its total surface area.

The ice will add to risks for ships now it has broken off. The peninsula is outside major trade routes but the main destination for cruise ships visiting from South America.

In 2009, more than 150 passengers and crew were evacuated after the MTV Explorer sank after striking an iceberg off the Antarctic peninsula.

The Larsen A and B ice shelves, which were situated further north on the Antarctic Peninsula, collapsed in 1995 and 2002, respectively.

"This resulted in the dramatic acceleration of the glaciers behind them, with larger volumes of ice entering the ocean and contributing to sea-level rise," said David Vaughan, glaciologist and director of science at British Antarctic Survey.

"If Larsen C now starts to retreat significantly and eventually collapses, then we will see another contribution to sea level rise," he added.

Big icebergs break off Antarctica naturally, meaning scientists are not linking the rift to manmade climate change. The ice, however, is a part of the Antarctic peninsula that has warmed fast in recent decades.

"In the ensuing months and years, the ice shelf could either gradually regrow, or may suffer further calving events which may eventually lead to collapse – opinions in the scientific community are divided," Luckman said.

"Our models say it will be less stable, but any future collapse remains years or decades away."