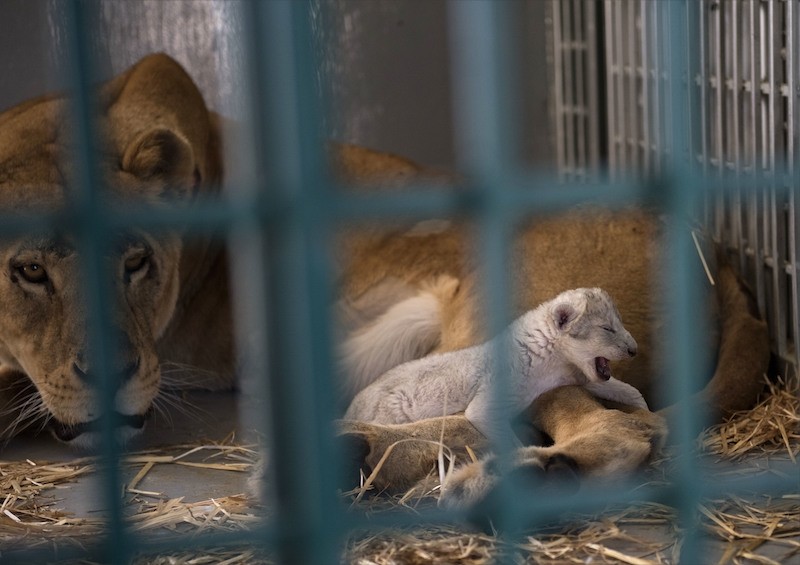 A lion cub was born just hours after its mother Dana was released into a wildlife reserve in Jordan after being rescued from a defunct zoo in war-torn Syria.

Dana and 12 other animals, including four other lions, two bears and two tigers, had barely survived under harsh conditions in the Syrian city of Aleppo, until a few months ago a major battleground in the country's civil war.

They were transported from Syria to Turkey and then to Jordan by the international animal charity Four Paws, stuck in cages during the three-week journey. They arrived at the al-Ma'wa reserve in northern Jordan on Friday.

Dr. Amir Khalil, a vet who accompanied the animals, said Sunday that he had been worried during the transport that Dana would give birth while in a cage. In such a case, it's unlikely the cub would have survived, he said.

The lion cub named Hajar, Arabic for "the immigrant," was born sometime in the night from Friday to Saturday, in the tranquility of the wooded reserve. Staff at the reserve discovered the cub when they checked on Dana on Saturday morning.

Khalil said he believes the lioness waited for a safe space to give birth.

The cub is white, a color that might change later, and weighs an estimated 1.5 to 2 kilograms (3.3 to 4.4 pounds), said Khalil who hasn't been able yet to examine Hajar. The gender is still unknown.

On Sunday, the cub was mostly sleeping next to the mother in a cage in the reserve. The mother has been bonding with the cub, nursing and cleaning it.

An ultrasound performed on Dana during the stopover in Turkey showed that she carried two cubs.

Khalil said it's unclear whether the second cub is still waiting to be born or whether it was born dead close to the time of Hajar's birth and was eaten by the mother.

The vet said the team will wait for a possible second birth until Monday and, if that hasn't happened, conduct an ultrasound to determine the next step.

The reserve now has 25 lions, tigers and bears rescued from war zones across the conflict-scarred region, including Iraq and the Gaza Strip.

The birth of the cub is a powerful symbol of hope, said Khalil. "After the dark, there is light," he said with a wide smile.