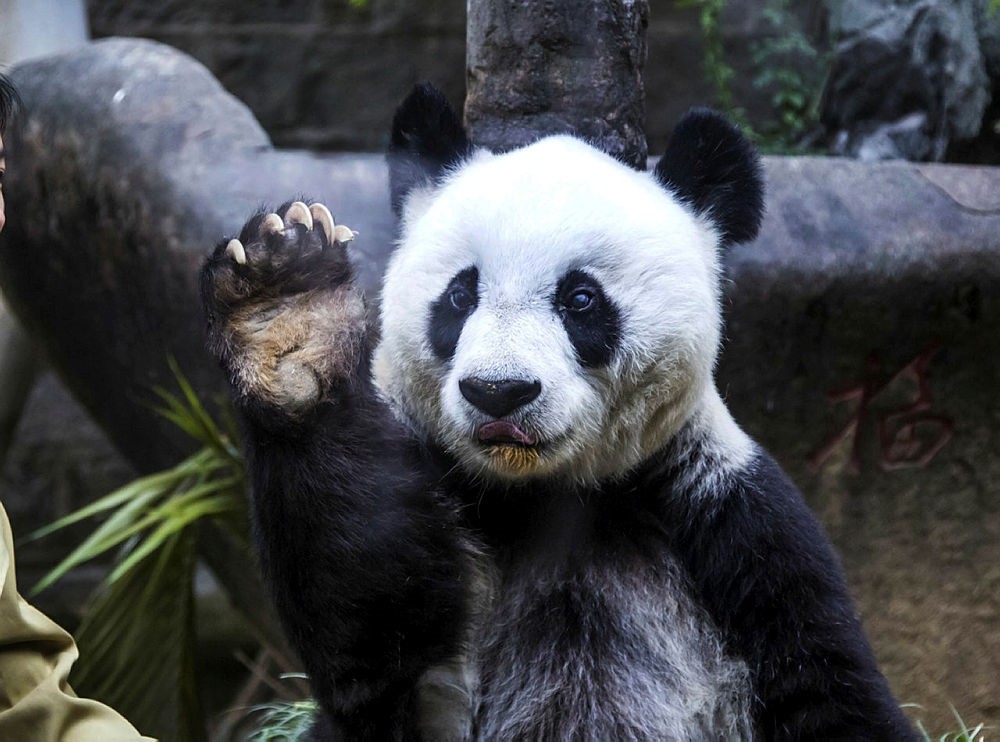 Basi the giant panda gestures during ceremonies to mark her 35th birthday at the Fuzhou Giant Panda Research Center in Fuzhou in southeastern China's Fujian province. (Chinatopix via AP)
by French Press Agency - AFP
Sep 14, 2017 12:00 am

The world's oldest captive giant panda has died at the ripe old age of 37 -- more than 100 in human years -- her handlers in China said on Thursday as they gave "Basi" an emotional send-off.

The Straits Giant Panda Research and Exchange Center in southeastern China, where she has lived for 33 years, bid a heartfelt farewell to the bear, with a memorial service that featured Basi's body surrounded by yellow flowers with the tip of her tongue sticking playfully out.

"With a heavy heart, we solemnly announce today that the original model of 'Pan Pan', the mascot for the first Asian Games (in China, 1990), and an angel of friendship both at home and abroad, giant panda star Basi died at 8:50am on September 13, 2017 at the age of 37," the centre said.

White roses, arranged in the shape of a heart, also were laid in front of Basi's favourite tree.

"She once brought us joy here, and we wish to leave the fragrance here for her," Xiu Yunfang, deputy director of the facility in the city of Fuzhou, told state television.

Basi outlived most of her peers by nearly two decades -- pandas in the wild have an average lifespan of about 20 years, but those in captivity generally live longer.

She died of old age, liver cirrhosis and kidney failure, said the centre, which also serves as a zoo known as Fuzhou Panda World.

Besides her longevity, Basi was beloved for her athletic feats, which became the inspiration for the 1990 Asian Games official mascot.

She could ride a bike, dunk a ball through a lowered basketball hoop, lift weights, and twirl a baton in her forepaws while balancing on a see-sawing wooden board.

Basi also wowed American crowds in 1987 while on six-month loan to the San Diego Zoo.

"Basi has left, but her beautiful image and Basi spirit will forever be in our hearts," the panda centre's director Chen Yucun said in a eulogy sent to AFP, describing her as "legendary".

Basi became something of a celebrity in China over the years and has been photographed together with current first lady Peng Liyuan.

Her birthdays were often celebrated with gusto. For her 35th, the zoo erected a two-metre stone statue of her, and earlier this year she dug into a birthday cake while wearing a red crown.

"Such a big loss for the panda world. Thank you for the sweet memories," said one user on China's Twitter-like Weibo platform.

Basi was rescued from the wild after falling into a river in southwestern China when she was around four and has lived at the Fuzhou facility ever since. She was named after the valley where she was found.

Giant pandas have a notoriously low reproductive rate, a key factor -- along with habitat loss -- in their status as vulnerable on the International Union for Conservation of Nature's (IUCN) Red List of threatened species.

Basi also broke ground as the first panda to have cataract surgery and also the first diagnosed with hypertension.

Her body will be kept preserved for display in a planed "Basi Museum" at the zoo.

He also was notable for having sired more than 130 descendants -- one quarter of all the captive-bred pandas on the planet, officials said at the time.