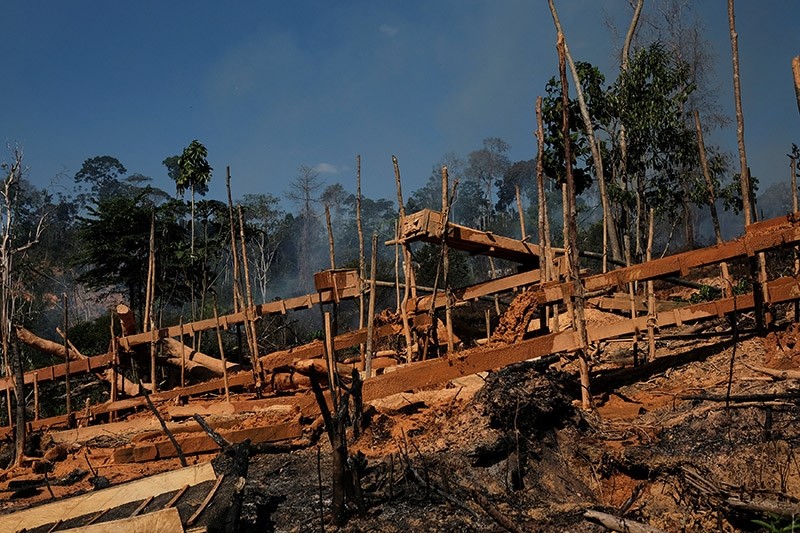 Sluice boxes are seen at a wildcat gold mine, also known as garimpo, at a deforested area of Amazon rainforest near Crepurizao, in the municipality of Itaituba, Para State, Brazil, August 2, 2017. (Reuters Photo)
by Sep 20, 2017 12:00 am

The environmental activist group said its investigators had flown over part of the Denmark-sized reserve known as Renca in the eastern Amazon and found at least 14 illegal mines and eight clandestine landing strips used by miners.

Greenpeace said this showed the risks faced by Renca even without President Michel Temer's proposal for ending a ban on large-scale foreign mining in the mineral-rich region.

"We flew over a small part of Renca and found all these places in just one conservation unit. How many more might exist across the region?" asked Marcio Astrin from Greenpeace in a statement.

"If the Brazilian government can't control the illegal activity now, when this area is under protection, what will happen to Renca with commercial exploration?"

Temer's decree signed on August 25 on opening up Renca was suspended days later after an international outcry. The government says it will allow 120 days of debate before taking a decision.

Temer argues that lifting restrictions will allow Brazil to boost its struggling economy and also push the hugely destructive wildcat mining operations out of business.

At the United Nations on Tuesday, Temer told the General Assembly that Brazil plays a leading role in environmental protection.

"Brazil is proud to have the largest coverage of tropical forests on the planet. Deforestation is an issue that concerns us, especially in the Amazon. To this issue we have dedicated attention and resources," he said.