Only 2 out of 36,000 penguin chicks survive in 'catastrophic breeding failure' in Antarctica 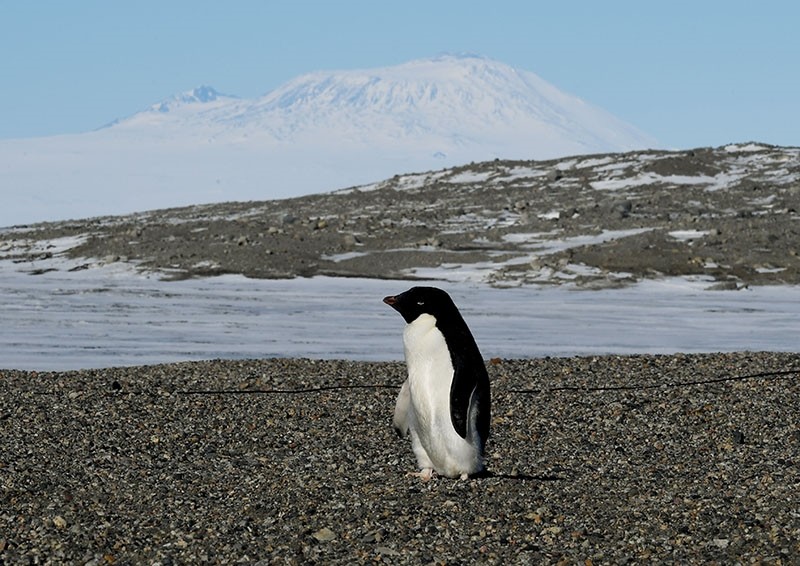 This file photo takon on November 11, 2016 shows an Adelie penguin arriving at the New Harbor research station near McMurdo Station in Antarctica (AFP Photo)
by Oct 14, 2017 12:00 am

Mass starvation has wiped out thousands of penguin chicks in Antarctica, with unusually thick sea ice forcing their parents to forage further for food in what conservationists Friday called a "catastrophic breeding failure."

French scientists, supported by WWF, have been studying a colony of 18,000 pairs of Adelie penguins in East Antarctica since 2010 and discovered only two chicks survived the most recent breeding season in early 2017.

They attributed the disaster to extensive sea ice late in the summer, meaning the adult penguins had to travel further to find food, with the chicks dying as they waited.

Yan Ropert-Coudert, senior penguin scientist at Dumont D'Urville research station, adjacent to the colony, said the region was impacted by environmental changes linked to the breakup of the Mertz glacier.

"The conditions are set for this to happen more frequently due to the breaking of the Mertz glacier in 2010 that changed the configuration of the stretch of sea in front of the colony," he told AFP.

"But there are other factors needed to have a zero year: a mix of temperature, wind direction and strength, no opening of polynya in front of the colony."

A polynya is an area of unfrozen sea within an ice pack.

He added that the coming season seemed to be better for the birds in terms of sea ice "but we never know-how it will turn unfortunately."

Surviving mostly on a diet of krill -- a small shrimp-like crustacean -- Adelie penguins, slick and efficient swimmers, have been generally faring well in East Antarctica.

But they have been declining in the Antarctic region more generally where climate change has taken its toll, with shifting ice reducing habitat while warming seas affect their prey.

Four years ago, the same colony, which numbered 20,196 pairs at the time, failed to produce a single chick.

Heavy sea ice, combined with unusually warm weather and rain followed by a rapid drop in temperature, resulted in them becoming saturated and freezing to death.

News of the penguin's problems came ahead of an annual meeting next week in Hobart of the 25-member Convention on the Conservation of Antarctic Marine Living Resources (CCAMLR).

But time ran out on a second proposed protected area in East Antarctica, covering another 1 million square kilometer zone, where the penguins died.

Hopes are high it will get the green light this time with WWF's head of polar programs Rod Downie saying it would help secure the future for Adelie penguins.

"The risk of opening up this area to exploratory krill fisheries, which would compete with the Adelie penguins for food as they recover from two catastrophic breeding failures in four years, is unthinkable," he said.