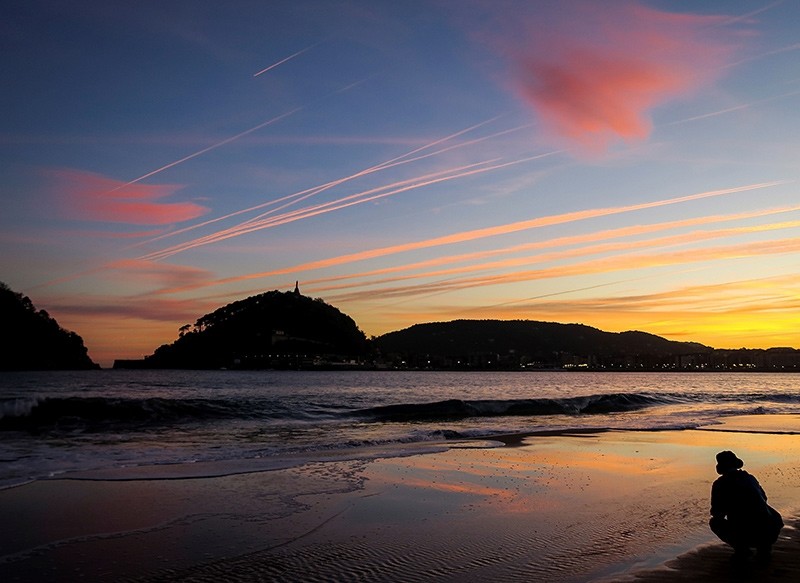 A man looks as the sun rises over the beach of Ondarreta in San Sebastian, in the northeren region of the Basque Country, Spain, 24 October 2017 (EPA Photo)
by Compiled from Wire Services
Nov 06, 2017 12:00 am

The U.N.'s weather and climate agency says 2017 is set to become the hottest year on record, apart from those impacted by the El Nino phenomenon.

The World Meteorological Organization says this year is already on track to be one of the three hottest years of all time, after 2015 and 2016. Those were both affected by a powerful El Nino, which can contribute to higher temperatures. Last year set a record for the average global temperature.

It said the global mean temperature from January to September this year was about a half-degree Celsius warmer than the 1981-2010 average.

"We have witnessed extraordinary weather," WMO Secretary-General Petteri Taalas said in a statement of 2017, pointing to severe hurricanes in the Atlantic and Caribbean, temperatures above 50 degrees Celsius (122°F) in Pakistan, Iran and Oman, monsoon floods in Asia and drought in East Africa.

"Many of these events – and detailed scientific studies will determine exactly how many – bear the tell-tale sign of climate change caused by increased greenhouse gas concentrations from human activities," he said.

The Bonn meeting is due to work on a "rule book" for the Paris Agreement, which seeks to end the fossil fuel era in the second half of the century by shifting the world economy to cleaner energies such as wind and solar power.

"These findings underline the rising risks to people, economies and the very fabric of life on Earth if we fail to get on track with the aims and ambitions of the Paris Agreement," said Patricia Espinosa, head of the U.N. Climate Change Secretariat which hosts the Bonn talks.