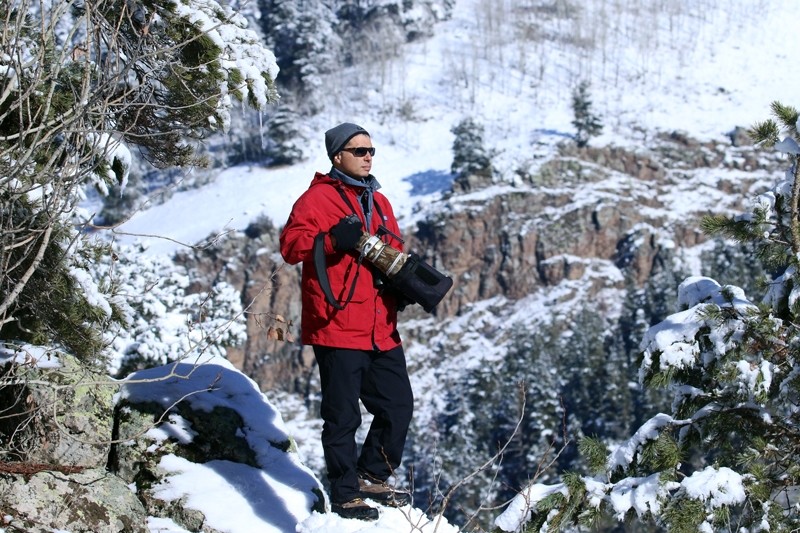 Located on the junction of two continents and featuring a diverse climate, Turkey boasts rich biodiversity and a wide array of wildlife. Recently, a team of nature lovers and filmmakers working with National Geographic produced a new film reintroducing Anatolia and its wildlife to the world

Turkey's eastern Anatolian region's wildlife will be introduced to the world as part of the "National Geographic Explorers Film Series" through a film project headed by associate professor Çağan Şekercioğlu, the head of the Kuzeydoğa Foundation.

A team of 17 traveled to Kars province to shoot scenes for the "National Geographic Explorers Film Series." Focusing on the life and wildlife-related work of Şekercioğlu, an academic in Utah University and Koç University, the team filmed for four days in the Kars and Iğdır provinces.

The film crew spent the four days exploring the region's fields and forests to document Turkey's wildlife in eastern Anatolia. Once complete, the film will eventually be shown around the world.

Şekercioğlu told Anadolu Agency (AA) that they have been conducting research to promote the protection of the wildlife and nature near the Kars, Ardahan, Iğdır, Ağrı and Erzurum provinces for 10 years.

As the only "National Geographic Explorer" and "risk bearer" branch for nature and wildlife working with the National Geographic Channel in Turkey, Şekercioğlu said they have discovered the world's only known migrating brown bear species, endangered Caucasus lynxes and thousands of bird species in the region through their research and observations.

Stressing that protecting nature, researching wildlife in its natural state and introducing it to the world are a very important tasks, the associate professor added: "It was very important to me that the filming take place in eastern Anatolia instead of Istanbul in order to promote the region. We intensely filmed the area for four days with special cameras, drones and a team of 17 from the 'National Geographic Explorers Film Series'."

Şekercioğlu also asserted that these types of films and documentaries help to contribute to the tourism potential of the region, and added that Kars and its Sarıkamış district are some of the best examples of Turkey's pristine nature.

Recalling the beauty of the snowfall during the filming, he said: "The snow transformed the scenery into an almost magical landscape. The 'National Geographic Explorers Series,' which shoots documentaries worldwide, is a very respected travel series and now the first series of its kind to film in Turkey. As a result, the series will reintroduce Turkey to the world, reminding everyone of the country's beautiful nature, diverse wildlife and touristic potential."

Şekercioğlu finished his speech, saying: "We saw two wolves, a huge wild boar and five brown bears before they went into hibernation, which was very lucky. I hope the video of the brown bears will educate people about Sarıkamış and encourage them to come see it for themselves."

Turkey is home to an impressive array of wildlife thanks to its geological position and diverse climate. It boasts a rich variety of landscapes, from its three coasts bordering the Mediterranean, Aegean and Black Seas to its mountain range stretching as high as 5,137 meters. The country has abundant forests, highlands, large rivers, wetlands and several mountain ranges. Turkey's unique position at the crossroads of Europe and Asia also provides an interesting mix of species – both animal and plant.

Eastern Anatolia, where the film crew is currently working, has one of the harshest climates in the country with the exception of Iğdır, whose unique positioning has gifted it with a tamer microclimate. Surrounded by mountains, Iğdır is shielded from the region's cold weather, giving the city a more Mediterranean-like climate despite its location in the far east of Anatolia. This unique climate has led to a wide array of biodiversity in the region.