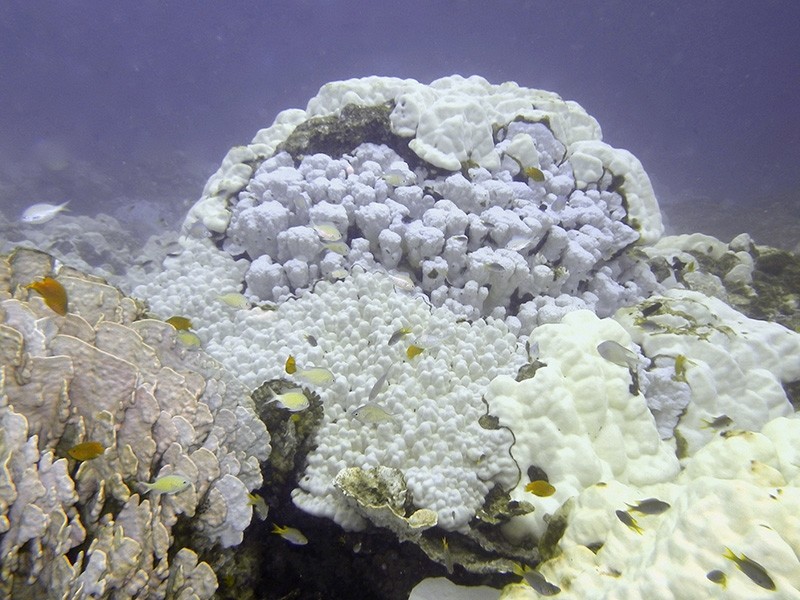 Coral bleaching, a deadly disease that strikes reefs when oceans heat up, has risen nearly fivefold since the 1980s, threatening the future of these vital ecosystems, researchers said Thursday.

Severe coral bleaching events used to happen once every 25 to 30 years. Now, they occur every six years on average, said the report in the journal Science.

"Before the 1980s, mass bleaching of corals was unheard of," said lead author Terry Hughes, director of the Australian Research Council (ARC) Centre of Excellence for Coral Reef Studies.

"But now, repeated bouts of regional-scale bleaching and mass mortality of corals has become the new normal around the world as temperatures continue to rise."

Millions of people worldwide depend on corals for their livelihoods, whether for tourism or scuba diving or for the fish and sea creatures that make their homes in reefs.

When water temperatures rise suddenly, algae in the corals can die, cutting off an important source of nutrients. If warming persists for several months, corals can turn white and die.

The study analyzed bleaching events at 100 locations around the world between 1980 and 2016.

In the last few years, 30 percent of bleaching episodes could be described as "severe," extending tens to hundreds of miles, or kilometers.

The risk of severe bleaching has risen about 4 percent per year since 1980.

"When bleaching is severe and prolonged, many of the corals die. It takes at least a decade to replace even the fastest-growing species."

The risk of bleaching events has increased most strongly over time in Australia, parts of Asia and the Middle East.

The Great Barrier Reef has bleached four times since 1998, including back-to-back events in 2016 and 2017 that wreaked massive damage.

Many but not all bleaching events are driven by the tropical warming trend known as El Nino, which last peaked in 2015 and 2016.

"The climate has warmed rapidly in the past 50 years, first making El Ninos dangerous for corals, and now we're seeing the emergence of bleaching in every hot summer," said co-author C. Mark Eakin of the U.S. National Oceanic and Atmospheric Administration.

Hughes said he hopes the study will "help spur on the stronger action needed to reduce greenhouse gases in Australia, the United States and elsewhere."