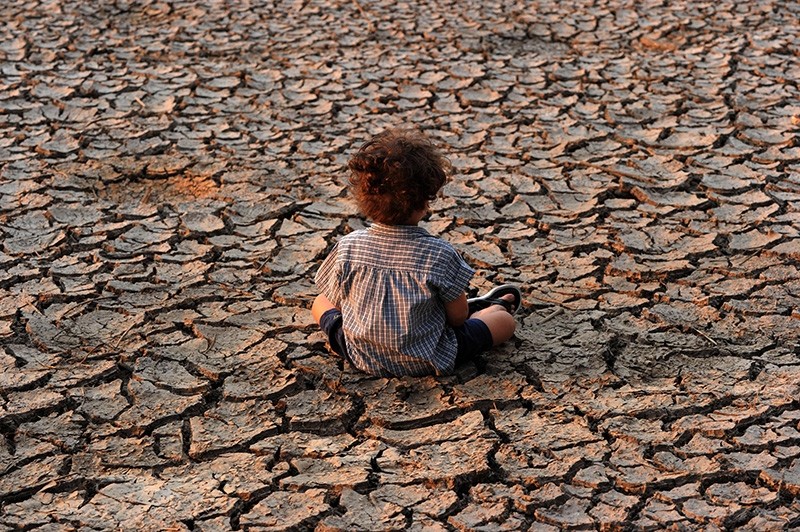 This file photo taken on April 22, 2016 shows a child sitting on dry soil in an area affected by a drought on Earth Day in the southern outskirts of Tegucigalpa. (AFP Photo)
by Compiled from Wire Services Jan 18, 2018 12:00 am

Last year joined 2015 and 2016 as the hottest three years since the late 19th century, the World Meteorological Organization (WMO) said on Thursday in Geneva.

The average temperature in 2017 was 1.1 degrees Celsius above pre-industrial levels, "in a clear sign of continuing long-term climate change" caused by greenhouse gases, the UN agency said.

WMO Secretary General Petteri Taalas pointed out that 17 of the 18 warmest years on record have occurred in this century. "The long-term temperature trend is far more important than the ranking of individual years, and that trend is an upward one," he said.

The 21st century has so far been a period of the hottest weather, accounting for 17 of the 18 warmest years on record.

"And the degree of warming during the past three years has been exceptional," Tasslas added.

In the past three years, the arctic region was especially warm, which will have long-lasting effects on sea levels and weather patterns across the globe, according to the Finnish UN chief meteorologist.

The WMO also highlighted the intensification of weather and climate related disasters, which hit record levels in the United States last year, while multiple countries were devastated by cyclones, floods and drought.

The WMO findings were based on data provided by the U.S. National Oceanic and Atmospheric Administration, U.S. space agency NASA, Britain's Met office, the European Centre for medium range weather forecasts and the Japan Meteorological Agency.

Reacting to the results, experts warned that the planet was moving closer to a set of red lines laid out in the historic 2015 Paris climate agreement.

"When even 'colder' (non-El Nino) years are rewriting the warmest year record books we know we have a problem," said Dave Reay, the Carbon Management chair at the University of Edinburgh.

"Global temperatures will continue to bob up and down from year to year, but the climate tide beneath them is rising fast."

There is mounting global consensus on the need to slash CO2 and methane emissions, improve energy efficiency, and develop technologies to remove CO2 from the air.

But U.S. President Donald Trump's decision to withdraw from the Paris accord has rattled the international community and complicated efforts at forging joint action -- even though many U.S. state governments insist they remain committed to cut emissions.

Trump will head to the World Economic Forum in Davos next week, an annual gathering of global elite, where he will confront some of the political and civil society leaders who fought hard for the Paris deal.

"The record temperature should focus the minds of world leaders, including President Trump, on the scale and urgency of the risks that people, rich and poor, face around the world from climate change," said Bob Ward, policy director at the Grantham Research Institute on Climate Change and the Environment and the London School of Economics.