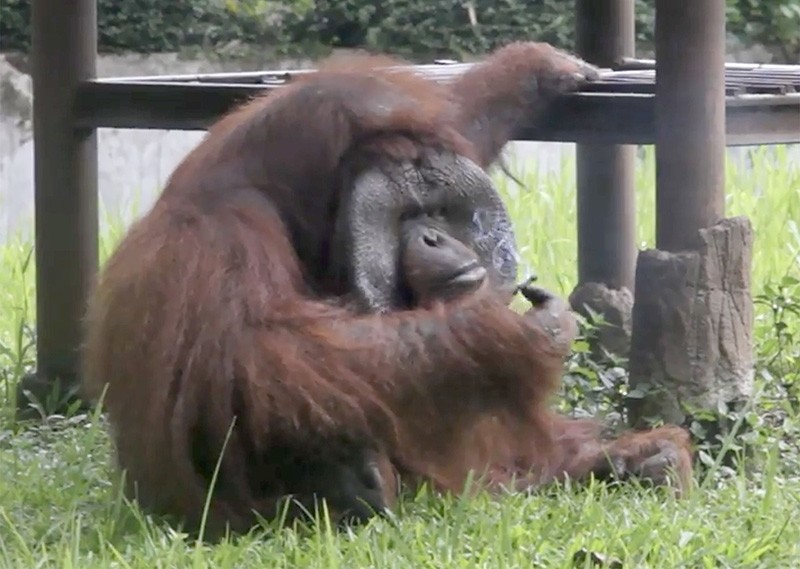 Video frame grab taken on March 4, 2018, and released by the Indonesia Animal Welfare Society March 7 shows a Bornean orangutan named Ozon smoking a cigarette in its zoo enclosure in Bandung, about 150 kilometers southeast of Jakarta. (AFP Photo)
by Associated Press
Mar 07, 2018 12:00 am

An Indonesian zoo infamous for mistreatment of animals is being slammed again by activists after a video emerged of one of its orangutans smoking.

Activist Marison Guciano said Wednesday the smoking great ape is further evidence of a lack of supervision and education at Bandung Zoo, about 120 kilometers (75 miles) southwest of the capital, Jakarta.

In the video shot Sunday, a young man flicks his half-smoked cigarette into the primate's enclosure. It's picked up by the reddish-brown primate, who expertly puffs on it to laughter from the crowd.

Guciano said the man committed a crime but the privately-owned zoo is mainly responsible because of its "ignorance of supervision and education for visitors."

The zoo has repeatedly made headlines for starving and sick animals. It was temporarily closed in 2016 after a Sumatran elephant that died was found to have bruises on its body.

A change.org petition calling for Bandung Zoo to be closed has nearly 1 million signatures. Visitors who review the zoo on TripAdvisor describe a dirty facility and sadness and anger at seeing the condition of the animals.

Zoo spokesman Sulhan Syafi'I said "we very much regret that such a thing happened" and the incident was reported to police.

Signs at the zoo warn visitors to not feed animals or give them cigarettes, he said.

Substandard conditions are common at Indonesian zoos and Guciano blamed the government for being slow in establishing animal welfare standards.