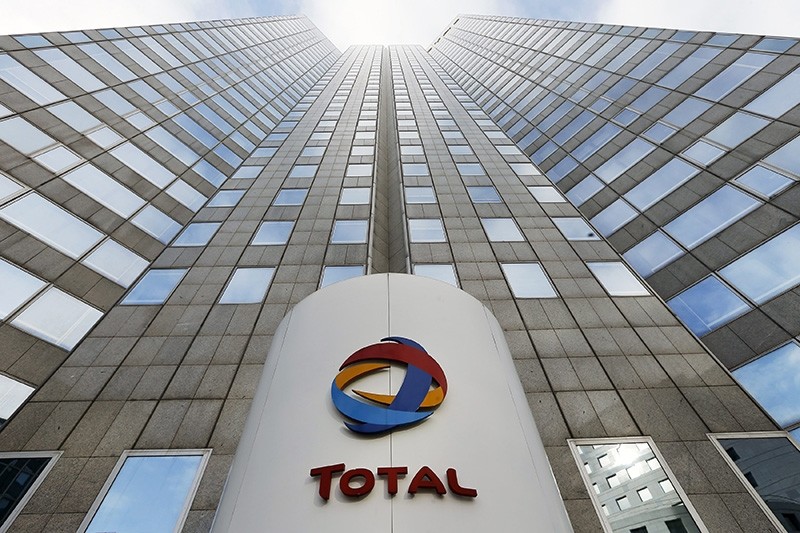 In tjhis Feb.5, 2013 file photo, the logo of the French oil giant Total SA is seen at the entrance of the company headquarters in the La Defense business district, west of Paris. (AP Photo)
by Compiled from Wire Services Apr 17, 2018 12:00 am

Environmental campaigners Greenpeace said Tuesday that a massive coral reef has been found to extend right into where France's oil company Total plans to drill near the mouth of the Amazon.

The reef was discovered in 2016, but is now known to extend further than thought, right into areas where Total is seeking to drill, 75 miles (120 km) off the Brazilian coast, the group said.

The finding, made during a research expedition, invalidates Total's environmental impact assessment, which is based on the reefs being located at least five miles (eight km) from drilling, Greenpeace said.

"Now that we know the Amazon Reef extension overlaps with the perimeter of Total's oil blocks, there is no other option for the Brazilian government but to deny the company's license to drill for oil in the region," said Thiago Almeida, Greenpeace Brazil campaigner in a statement.

Greenpeace described the newly found reef extension as an area of rhodoliths, a calcareous algae that form a habitat for reef creatures.

"To learn the Amazon Reef extends beyond our expectations was one of the most exciting moments of my research about this ecosystem," said Fabiano Thompson, an oceanographer at Rio de Janeiro Federal University.

"The more we research about the Amazon Reef, the more we find. We still know so little about this fascinating new ecosystem and the knowledge obtained so far indicates any oil drilling activity could seriously harm this unique system," he said.

Total led a group including Britain's BP Plc and Brazilian state-run oil company Petrobras in buying five exploration blocks in the Foz do Amazonas basin in 2013, but the discovery of a massive coral reef just 28 kilometers (17 miles) from the blocks has thrown environmental approval for drilling into doubt. As the operator, Total is responsible for applying for environmental licenses.

Representatives for Total did not immediately reply to requests for comment on the Greenpeace statement.

Environmentalists said potential oil leaks in the Foz do Amazonas basin, named for its location near the mouth of the Amazon river, could wreak havoc in the rainforest in Brazil's far northern Amapá state in addition to harming the reef.