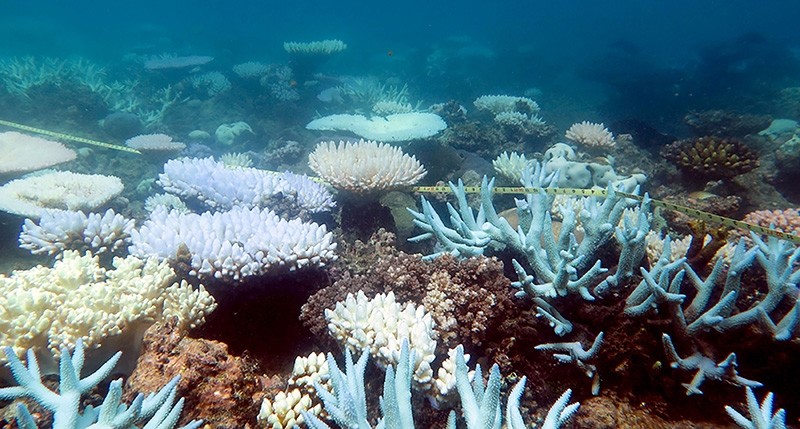 An undated handout photo received from ARC Centre of Excellence for Coral Reef Studies on April 19, 2018 shows a mass bleaching event of coral on Australia's Great Barrier Reef. (AFP Photo)
by Apr 19, 2018 12:00 am

Australia's Great Barrier Reef suffered a "catastrophic die-off" of coral during an extended heatwave in 2016, threatening a broader range of reef life than previously feared, a report revealed Thursday.

Scientists said some 30 percent of the reef's coral died in the heatwave from March to November 2016, the first of an unprecedented two successive years of coral bleaching along the 2,300-kilometre (1,400-mile) World Heritage-listed reef off Australia's northeastern coast.

The study published Thursday in the journal Nature found that coral, which serves as habitats for other creatures, were particularly hard hit by the rising sea temperatures caused by global warming.

Terry Hughes, a report co-author and head of the Centre of Excellence for Coral Reef Studies at Australia's James Cook University, told AFP the most susceptible to heat exposure were branching corals -- table-shaped creatures that provide nooks and crannies for fish nurseries and fisheries.

Corals that were more likely to survive the warmer sea temperatures were smooth and melon-shaped, he said. While they were good calcifiers that add volume to reefs, they were "not very useful as habitable providers."

"So there is a shift in the mix of species and the overall loss of corals has a broader impact on all the creatures that depend on the corals for food and habitats," Hughes said.

His research center said the new study showed that corals on the northern Great Barrier Reef "experienced a catastrophic die-off" following the 2016 heatwave.

"The coral die-off has caused radical changes in the mix of coral species on hundreds of individual reefs, where mature and diverse reef communities are being transformed into more degraded systems, with just a few tough species remaining," said Andrew Baird, another of the report's authors.

The scientists said the focus should be on protecting the surviving corals, which number about a billion after the two bleaching events in 2016 and 2017.

"They are the ones that are going to refeed and repopulate an altered reef into the future," Hughes said, adding that one way to maintain their health was through improving water quality by reducing coastal pollution.

Efforts to curb climate change, such as through the Paris Agreement to cap global warming at under 2.0 degrees Celsius (35.6 degrees Fahrenheit) below pre-industrial levels, were also critical.

"We are on a pathway where we are committed to a different Barrier Reef. If we continue with business-as-usual emissions, then I don't think the reef can survive."

Coral reefs make up less than 1 percent of Earth's marine environment, but are home to an estimated 25 percent of ocean life, acting as nurseries for many species of fish.