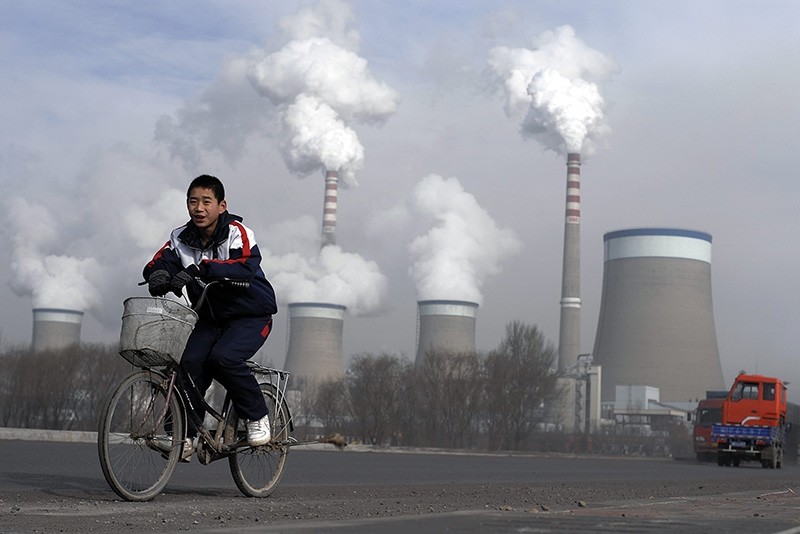 More than 90 percent of the global population is breathing in high levels of pollutants, the World Health Organization (WHO) said Wednesday, blaming poor air quality for some 7 million deaths annually.

Fresh data from the U.N. health body showed that every corner of the globe is dealing with air pollution, although the problem is far worse in poorer countries.

"Air pollution threatens us all, but the poorest and most marginalized people bear the brunt of the burden," WHO chief Tedros Adhanom Ghebreyesus said in a statement.

WHO's study, which examined health-hazardous levels of both outdoor and household air pollution, found that "around 7 million people die every year from exposure to fine particles in polluted air."

More than 90 percent of deaths linked to air pollution occur in low- or middle-income countries, mainly in Asia and Africa, it found.

"This is a very dramatic problem that we are facing," Maria Neira, the head of the WHO's department of public health and environment, told reporters in a conference call.

PM2.5 includes toxins like sulfate and black carbon, which pose the greatest health risks since they can penetrate deep into the lungs or cardiovascular system.

These toxins are critical risk factors for non-communicable diseases (NCDs), causing an estimated one-quarter (24 percent) of all adult deaths from heart disease, 25 percent from strokes, 43 percent from chronic obstructive pulmonary disease and 29 percent from lung cancer.

Globally, outdoor air pollution has remained high and largely unchanged in the past six years, while household air pollution has got worse in many poorer countries, as people continue to cook with solid fuel or kerosene, instead of cleaner fuels such as gas and electricity.

"The transition to clean fuels and technology in the home, clean household energy, is too slow. It's been three decades and we still have 3 billion people primarily relying on [polluting] fuels and technologies, and that's for cooking alone," said WHO technical officer Heather Adair-Rohani.

India's Kanpur topped this year's list of cities with the worst air quality.

"Now I cannot imagine stepping outside my home without covering my nose and mouth," Savita Saxena, an elderly woman, told Agence France-Presse.

Kanpur doctors say the worsening air quality over the past decade has brought a major increase in respiratory and eye illnesses.

Fourteen Indian cities, led by the northern metropolis known for its leather and shoe industries, feature in the 15 cities with the dirtiest air in the WHO's global list.

The capital New Delhi and Agra, home of the Taj Mahal, also figured among the cities with the worst air in the survey of 4,300 cities in 100 countries.

India for years has been struggling to improve the air quality in urban areas, which takes a huge toll on the health of millions of residents.

In the latest report Delhi marginally improved its ranking to sixth, up from the most polluted city in 2014.

WHO urged India to follow China's example to tackle air pollution, which has made big improvements in recent years.

"There is a big step at the government level [in China] declaring war on air pollution," Maria Neira, WHO's head of public health, said.

"We would be very happy if we would see a similar movement now in India which is one of the countries for which we are particularly concerned, although there are good initiatives which can be put in place quickly, still the levels are very high and we would like to see a similar decision and leadership."

Chinese cities such as Xingtai and Shijiazhuang and the Saudi refining hub at Jubail were also highly polluted, but the data for those places was 4-5 years old.

The most polluted city in 2016's report, Zabol in Iran, has had its pollution level cut fourfold in the latest version of the database, and now appears to be cleaner than Australia's capital Canberra.

WHO hailed that more than 1,000 more cities had been added to its database since its last report two years ago, noting that monitoring can prompt action toward addressing the problem.

The report meanwhile stressed an unevenness in the information received, with a dire lack of data from Africa and parts of the Western Pacific region.

Only eight of the 47 countries in Africa have provided air quality information about one or more of their cities.

And while the database lists information on 181 Indian cities, it provides data for only nine Chinese cities.