Emissions of banned ozone-eating chemical on the rise, scientists say 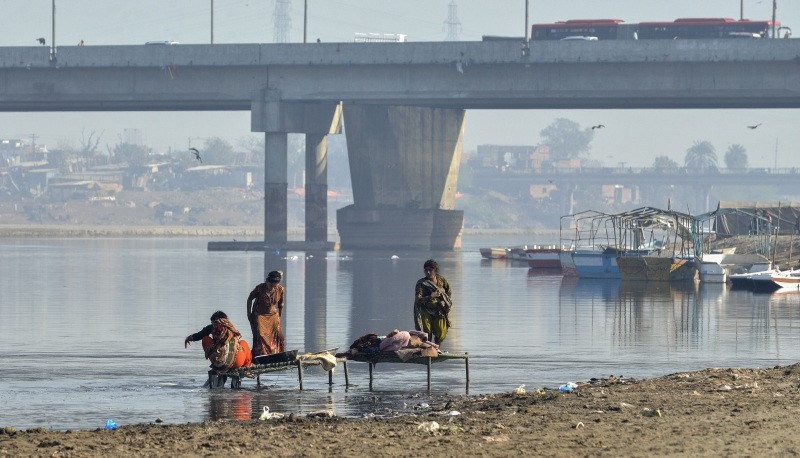 In this picture taken on February 26, 2018, shows Pakistani residents washing clothes in the polluted Ravi river on the outskirts of Lahore. (AFP Photo)
by Compiled from Wire Services May 16, 2018 12:00 am

Something strange is happening with a now-banned chemical that eats away at Earth's protective ozone layer: Scientists say there's more of it — not less — going into the atmosphere and they don't know where it is coming from.

When a hole in the ozone formed over Antarctica, countries around the world in 1987 agreed to phase out several types of ozone-depleting chemicals called chlorofluorocarbons (CFCs). Production was banned, emissions fell and the hole slowly shrank.

But starting in 2013, emissions of the second most common kind started rising, according to a study in Wednesday's journal Nature. The chemical, called CFC11, was used for making foam, degreasing stains and for refrigeration.

"It's the most surprising and unexpected observation I've made in my 27 years" of measurements, said study lead author Stephen Montzka, a research chemist at the National Oceanic and Atmospheric Administration.

"Emissions today are about the same as it was nearly 20 years ago," he said.

Countries have reported close to zero production of the chemical since 2006 but the study found about 14,300 tons (13,000 metric tons) a year has been released since 2013. Some seeps out of foam and buildings and machines, but scientists say what they're seeing is much more than that.

Measurements from a dozen monitors around the world suggest the emissions are coming from somewhere around China, Mongolia and the Koreas, according to the study. The chemical can be a byproduct in other chemical manufacturing, but it is supposed to be captured and recycled.

Either someone's making the banned compound or it's sloppy byproducts that haven't been reported as required, Montzka said.

The ozone layer in the stratosphere, 10-to-40 kilometers (6-25 miles) above Earth's surface, protects life on the planet from deadly ultraviolet radiation.

The 1987 Montreal Protocol banned industrial aerosols such as CFCs that were chemically dissolving ozone, especially above Antarctica.

At its most depleted, around the turn of the 21st century, the ozone layer had declined by about five percent.

Today, the "hole in the ozone" over the South Pole is showing clear signs of recovery.

"The ozone layer remains on track to recovery by mid-century," the U.N. Environment Programme (UNEP) said in a statement, reacting to the findings.

But "continued increase in global CFC-11 emissions will put that progress at risk."

The slowdown in reduction of CFC-11 also has implications for the fight against climate change.

"Perhaps even more serious is the role of CFCs as long-lived greenhouse gases," noted Joanna Haigh, a professor at Imperial College London, in commenting on the study.

Two decades ago, CFCs -- more potent by far as greenhouse gases than carbon dioxide or methane -- accounted for around ten percent of human-induced global warming.

Widely used in 1970s and 1980s as propellant in aerosol sprays, as well as in refrigeration and air conditioning systems, CFCs do not exist in nature.

"This is the first time that emissions of one of the three most abundant, long-lived CFCs have increased for a sustained period since production controls took effect in the 1980s," the study concluded.

CFC-11 still contributes about a quarter of all chlorine -- the chemical that triggers the breakdown of ozone -- reaching the stratosphere.

The researchers said that the less rapid decline of CFC-11 could prevent ozone from returning to normal levels, or at least as quickly as hoped.

"A timely recovery of the stratospheric ozone layer depends on a sustained decline of CFC-11 concentrations."

Other scientists not involved in the study signaled its importance.

"This is atmospheric detective work at its finest," said Piers Forester, head of the Priestley International Centre for Climate at the University of Leeds.

The UNEP said that is was "critical that we take stock of this science, identify the causes of these emissions and take necessary action."

A study earlier this year found that the ozone layer is unexpectedly declining in the lower stratosphere -- 10 to 24 kilometers above sea level -- over the planet's populated tropical and mid-latitude regions.

CFCs and other molecules have mainly eroded ozone in the upper stratosphere, and over the poles.