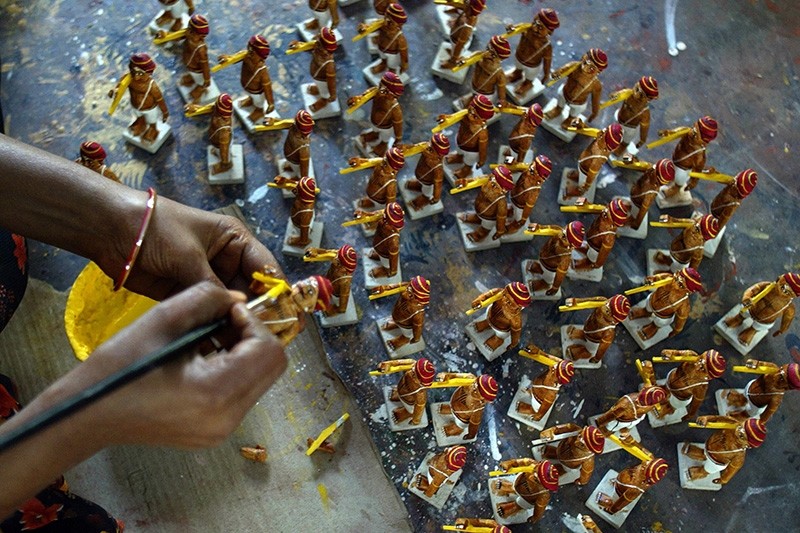 In this file photo taken on December 18, 2008, an Indian artisan applies vegetable paint to toys at a workshop in Kondapalli village in Vijayawada district of Andhra Pradesh state. (AFP Photo)
by French Press Agency - AFP
May 16, 2018 12:00 am

Artisan wood carvers who have been making intricate toys for Indian maharajas, ministers and their children for generations are facing ruin as the rare wood their unique products rely on disappears.

The highly-treasured, brightly-colored Kondapalli toys are under threat from deforestation, and in particular the rampant exploitation of the Tella Poniki tree.

The wooden elephants, soldiers and gods are named after the Andhra Pradesh village of Kondapalli, where artists have lived since the 16th century.

The craftsmen and women produce the figures for royalty and high-ranking politicians, with ministers still regularly giving Kondapalli toys as gifts to foreign dignitaries. 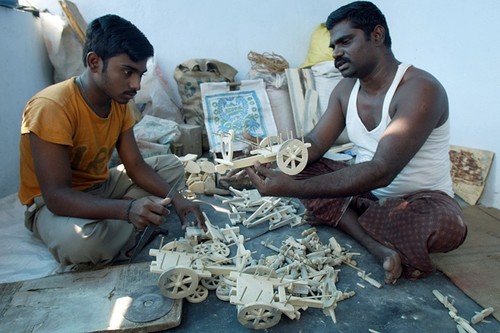 Their tradition depends on the Tella Poniki, a rare tree that only survives around the nearby city of Vijayawada. The disappearing forests mean the carvers must look further afield for supplies of the white wood, which is prized for its malleability.

The Kondapalli carvers are also battling the threat of digital toys and are wrestling with the quandary of whether to adopt modern machinery to up their efficiency and cut their prices.

"Market demand and curiosity for these toys may be increasing but we are nothing without quality wood at a reasonable price," Bharani Kota Verma, a 48-year-old fifth generation Kondapalli toymaker told AFP.

Verma said the price of wood has doubled in the past three years because of the shortage. "Our margins have been squeezed," he said.

"The wood from the tree is very soft and ideal for carving into various shapes," explained 55-year-old S.K Ashra Funnisa, who has been making toys for more than 40 years.

She pointed to a Tella Poniki log that cost 400 rupees ($7) three years ago but now costs double. 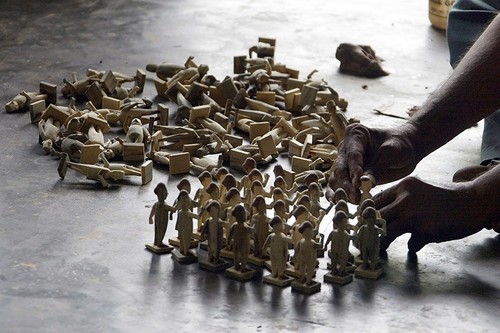 He explained many craftsmen are unable to find legal local supplies and are approaching middlemen who pass off similar softwoods from further afield at higher prices.

Murthy said authorities would create up to five hectares (12 acres) of new land for Tella Poniki each year over the next two decades.

Competition from more modern toys and the growing attraction of machines also weighs heavily on Kondapalli.

"Eight to 10 hours of labor to carve 20 cows or buffaloes only gives me about 300 rupees ($5)," Shaik Moulali said at his cramped one-room home, which doubles as a workshop.

He sat with a jute basket of carved and part-finished animal figures in one corner. His wife, Baji Sheikh, sat with their two sons, cooking on a small stove at the other end.

"The introduction of machines will definitely reduce the effort and energy spent by people like me," he said.

Others like Verma reject the replacement of traditional knives, brushes and chisels. "No genuine toymaker uses machines," he said.

Men and women in Kondapalli families traditionally share the toy work. Men carve the woodwork while women do the intricate painting.

Baji -- who does household chores and takes care of sons Khaja, 9 and Shahin Baba, 12 -- spends eight hours each day painting at least 50 animals.

Many locals say the authorities should do more to promote the toys that still have a special significance at festivals and social occasions.

More contemporary designs have been added to the toy catalog, while the use of enamels and other modern paints have cut costs and made the toys more durable.

But even with these efforts, things look bleak.

"The next generation, who can earn more without learning these tough skills and the hard work, isn't interested in entering this field like people did 10 or 20 years back," Verma said.

"I just want them to study and find a job," he said, gesturing toward his 15-year-old daughter nearby. Verma fears he will be the last toymaker in his family.