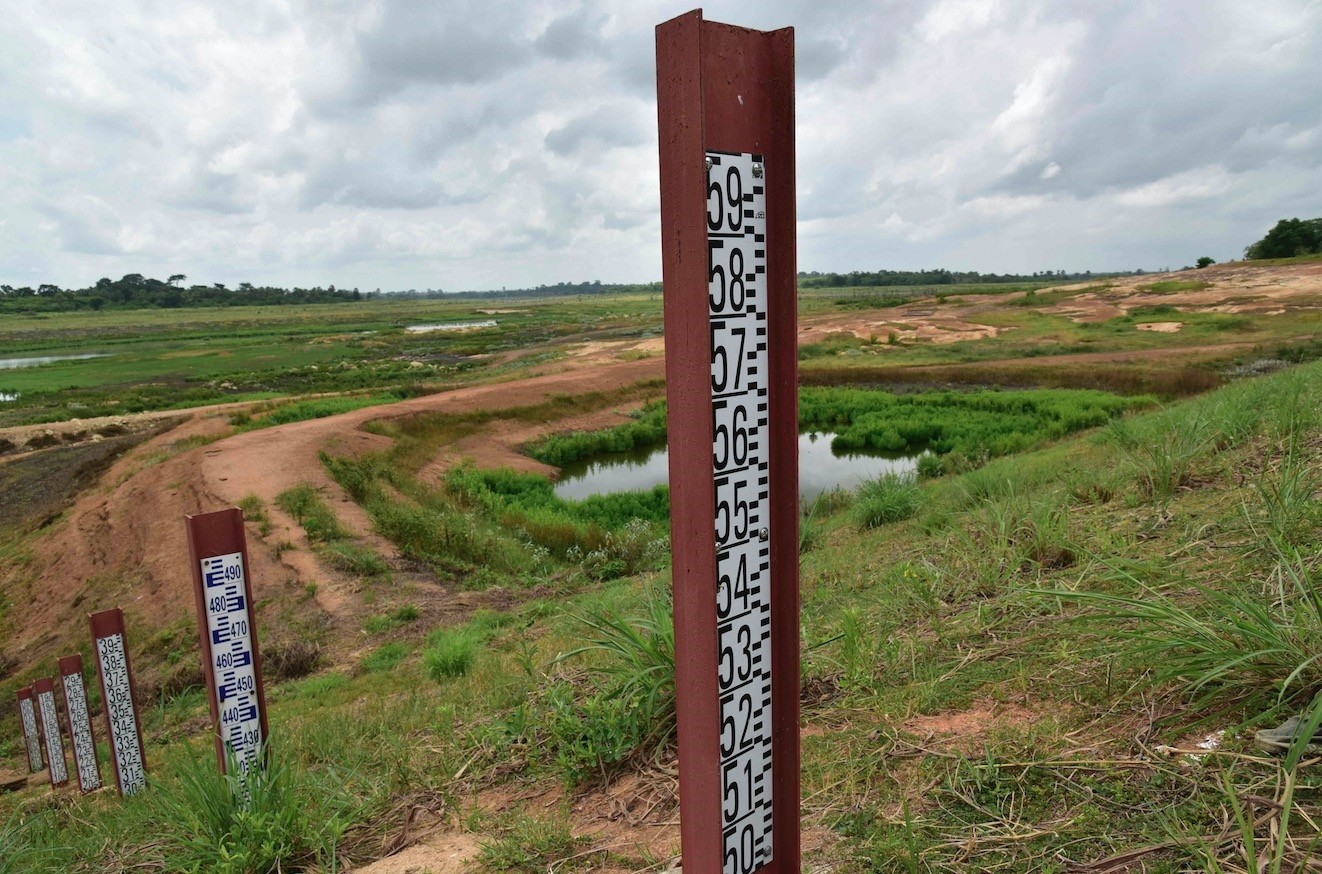 Poles indicating the water level at the Asseche Dam in Angoua-Yaokro near Bouake, Ivory Coast.
by Jun 08, 2018 12:00 am

"All that comes out of the tap right now is cockroaches," said Honorine Babalou, a 20-year-old textile worker.

In Bouake, Ivory Coast's second city, the regular water supply trickled to a halt three months ago - a shortage that officials blame on a drought inflicted by global warming.

Like many other Bouake residents, Babalou balanced on her head a giant basin of fresh water drawn from a tanker truck which had trundled down sun-scorched clay tracks to make a delivery in a poor part of town.

The city of about 800,000 people, as estimated by the mayor, has long depended on the nearby Loka dam for around three-quarters of its water supply.

But the lake behind the dam has shriveled to almost nothing. Hundreds of meters behind a sign that sternly declares "Fishing and Bathing Forbidden" lies a sad, muddy puddle.

"This is climate change. It rains a lot less often, the sun has been stronger for several years," states Yeboue Ouffoue, 85, chief of the small village of Angoua-Yaokro, near the site where the dam was built in the late 1970s.

"Here we live off agriculture, but with the water shortage we can no longer plant the way we want. Income has dropped, that's for sure," Ouffoue said, expressing concern for some 300 villagers in his charge. "Times are hard."

"We've entered a time of water rationing in Bouake," said Mayor Nicolas Djibo, who also blames climate change, along with people who diverted waterways to exploit sand quarries in the region.

Located in the centre of Ivory Coast, Bouake is known as a centre for "white gold," referring to the once lucrative cotton industry, and now "grey gold", the thriving cashew nut business.

The city formerly served as headquarters for rebels who helped bring President Alassane Ouattara to power in 2011 after a disputed election and a violent political crisis.

Today, faced with an existential threat, the city is looking at a scheme to pipe in supplies from Lake Kossou, about 100 kilometers (60 miles) away.

This operation would take two years and cost an estimated 45 million euros ($53 million), said Djibo, who hopes the World Bank will help finance it.

At the Alassane Ouattara 2 University in Bouake, the lack of water has forced many students to leave their rooms on campus to return home, some geography students told Agence France-Presse (AFP).

Tanker trucks now provide emergency supplies, after attempts to drill into groundwater faltered. In a bid to ease the shortage, authorities sank wells in several parts of Bouake, but the water pumped fell far short of basic requirements.

"We're greeted like the Messiah, or something like that," joked driver Mohamed Lamine Diakite, whose truck carries 10,000 liters of water. He announces his arrival in a district by pumping his horn to bring local residents running.

In the Sokoura district, women set out hundreds of basins and buckets on the ground, waiting for the water distribution under a broiling sun. There are few men around. Women carry away the heavy load for the family.