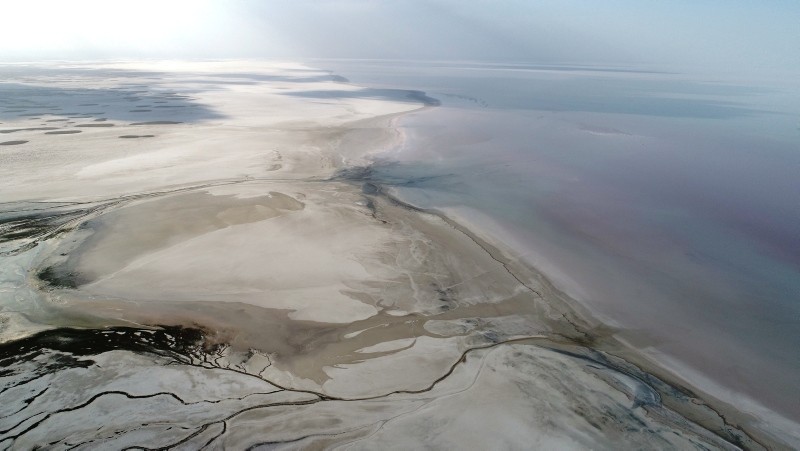 Turkey's 'Salt Lake' Lake Tuz in central Anatolia is rapidly shrinking and flamingos for which the body of water has served as a safe haven are becoming an increasingly rarer sight, according to an Ihlas News Agency report.

Lake Tuz, one of the largest hypersaline lakes in the world and Turkey's second largest lake in terms of area, provides a perfect habitat and hatching ground for flamingos as the birds usually choose to lay their eggs in salty and wet areas.

The area consisting of the lake itself and its smaller neighboring lakes, namely Akgöl, Bolluk, Düden and Tersakan, is considered to be a Class A wetland. There are 81 internationally significant wetlands in the world and only 18 of them are graded as Class A.

The report states that Lake Tuz has been classified as a "zone that has suffered serious and irreparable damages in the last 10 years or irreversibly lost small but significant parts" according to Special Environmental Protection Area criteria and has been put in the endangered category, meaning the lake needs immediate intervention and protective measures.

With the lake drying up and shrinking, flamingos or other birds which used to frequent the lake are no longer coming to the lake.

In an interview with Ihlas News Agency, Ömer Atıcı the headman of the Konya's Gölyazı village, which lies around 25 kilometers away from the lake, said that Lake Tuz has been drying up for the past five years.

"We walk four to five kilometers in to the lake and there is still no water. You can't find any living creatures here," he said, blaming the lack of water on no rainfall or snow.

Water sources feeding the Lake Tuz, which is a closed basin with karstic features, are also being used for irrigation in Konya Plain.

Placed under protection by Turkey's Ministry of Environment and Urbanization, flamingos mostly feed on artemia salina, tiny shrimp-like marine animals that live in salty waters. They come to the area during winter to lay their eggs if the water level is suitable for their offspring to hatch. While the number of flamingos laying eggs in the area decreases during drought, this number increases greatly if the water level of Lake Tuz is higher, meaning the number of flamingos that lay eggs in the lake changes every year.