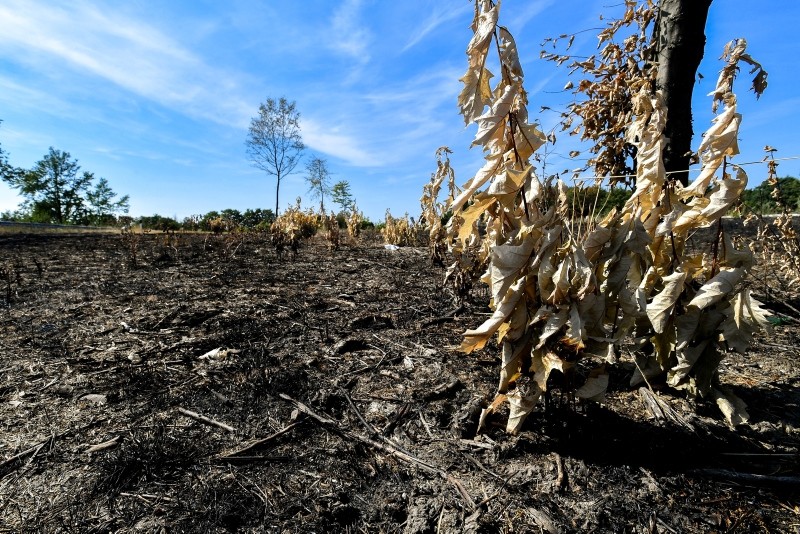 Heat waves are setting all-time temperature records across the globe, again. Europe suffered its deadliest fire in more than a century, and one of nearly 90 large fires in the U.S. West has destroyed 5,000 structures near Redding, California. Flood-inducing downpours have pounded the U.S. East this week.

It's all part of summer — but it's all being made worse by human-caused climate change, scientists say.

Japan hit 106 degrees on Monday, its hottest temperature ever. Records fell in parts of Massachusetts, Maine, Wyoming, Colorado, Oregon, New Mexico and Texas. And then there's crazy heat in Europe, where normally chill Norway, Sweden and Finland all saw temperatures they have never seen before on any date, pushing past 90 degrees. So far this month, at least 118 of these all-time heat records have been set or tied across the globe, according to the National Oceanic and Atmospheric Administration.

The explanations should sound as familiar as the crash of broken records.

Climate change making is making the world warmer because of the build-up of heat-trapping gases from the burning of fossil fuels like coal and oil and other human activities. And experts say the jet stream — which dictates weather in the Northern Hemisphere — is again behaving strangely.

"An unusually sharply kinked jet stream has been stuck in place for weeks now," said Jeff Masters, director of the private Weather Underground. He says that allows the heat to stay in place over three areas where the kinks are: Europe, Japan and the western United States.

The same jet stream pattern caused the 2003 European heat wave, the 2010 Russian heat wave and fires, the 2011 Texas and Oklahoma drought and the 2016 Canadian wildfires, Pennsylvania State University climate scientist Michael Mann said, pointing to past studies by him and others. He said in an email that these extremes are "becoming more common because of human-caused climate change and in particular, the amplified warming in the Arctic."

Climate scientists have long said said they can't directly link single weather events, like a heat wave, to human caused climate change without extensive study. In the past decade they have used observations, statistics and computer simulations to calculate if global warming increases the chances of the events.

A study by European scientists Friday found that the ongoing European heat wave is twice as likely because of human-caused global warming, though those conclusions have not yet been confirmed by outside scientists. The World Weather Attribution team said they compared three-day heat measurements and forecasts for the Netherlands, Denmark and Ireland with historical records going back to the early 1900s.

"The world is becoming warmer and so heatwaves like this are becoming more common," said Friederike Otto, a member of the team and deputy director of the Environmental Change Institute at the University of Oxford.

Erich Fischer, an expert on weather extremes at the Swiss Federal Institute of Technology in Zurich who wasn't part of the analysis said the authors used well-established methods to make their conclusions.

Georgia Tech climate scientist Kim Cobb said the link between climate change and fires isn't as strong as it is with heat waves, but it is becoming clearer.

A devastating fire in Greece — with at least 83 fatalities — is the deadliest fire in Europe since 1900, according to the International Disaster Database run by the Centre for the Research on the Epidemiology of Disasters in Brussels, Belgium.

In the United States on Friday there were 89 active large fires, consuming nearly 900,000 acres, according the National Interagency Fire Center. So far this year, fires have burned 4.15 million acres, which is nearly 14 percent higher than average over the past 10 years.

The first major science study to connect greenhouse gases to stronger and longer heat waves was in 2004. It was titled "More intense, more frequent and longer lasting heat waves in the 21st century." Study author Gerald Meehl of the National Center for Atmospheric Research said Friday that now it "reads like a prediction of what has been happening and will continue to happen as long as average temperatures continue to rise with ever-increasing emissions of greenhouse gases from burning fossil fuels. It's no mystery."