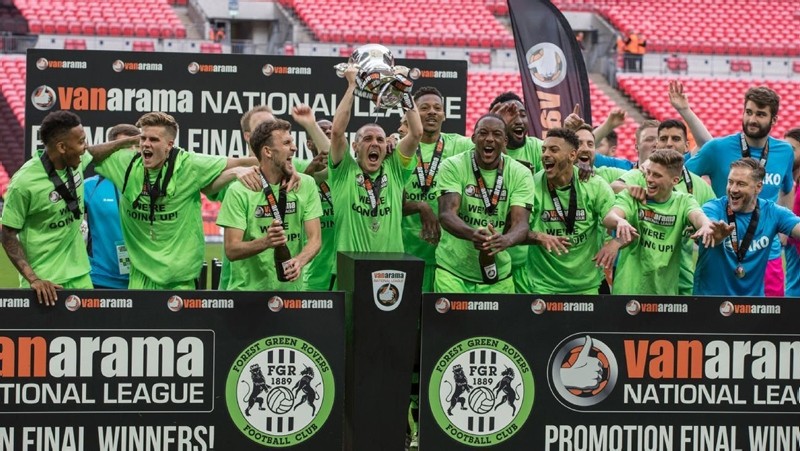 One-nil for the environmentalists.

An English football team has become the first professional sports team in the world to be certified carbon-neutral by the United Nations.

Forest Green Rovers, which plays in English football's fourth tier, has adopted a number of environmentally-friendly measures, from using electric vehicles, to vegan-only meals for players, staff and fans.

The club's 2,000-seat stadium in the quiet town of Nailsworth, England, is powered entirely by renewable energy, about 20 percent of which by solar panels.

Chairman Dale Vince, who also owns a renewable energy company, took control of the club in 2010 and quickly set to reshaping its policies.

"Football clubs can influence society to create change," he said. "And to do that, they've got to set a good example."

The U.N.'s Climate Neutral Now initiative aims to encourage all parts of society to take action against climate change. Applicants must measure their greenhouse gas emissions, then reduce them as much as possible.

Miguel Naranjo, a program officer at the United Nations' Climate Change Secretariat, said it's a way to help people understand how they can reduce emissions in their everyday life.

"It's the small things that make a big difference," said Naranjo.

Forest Green Rovers' plant-based menu was granted a vegan trademark by the Vegan Society last year. The team claims to be the world's first fully-vegan football club. While the players are not committed to being vegan outside of team meals, several of them say they are.

One popular dish is the 'Q Pie,' made with meat substitute Quorn, rather than the traditional beef or chicken that is found at football club kiosks across England.

"Some people come in and might think; 'Oh God, vegan food,'" said head chef Jade Crawford. "But then as soon as they try it, they're like: 'Actually it's quite nice.'"

The pitch, meanwhile, is tended without pesticides. And rather than driving a gas-powered mower, groundskeepers use a solar-powered robotic lawnmower, nicknamed "The Mowbot."

It works like a Roomba vacuum cleaner, driving in straight lines across the pitch until it encounters an obstacle.

Of course, there are some associated emissions the club can't avoid. Many fans travel to matches in traditional gas-powered cars, for instance.

Dale, the chairman, said that to meet the criteria for U.N. certification, they had to offset whatever carbon emissions they could not reduce by donating to a U.N. renewable energy program.

Forest Green, known as the "Green Devils" to their fans, donated to a project in India to offset its remaining emissions worth about 200 tons of carbon dioxide annually.

Environmentalists have praised the approach. Jamie Peters, a campaigner for Friends of the Earth, said the club has shown leadership, "to show that these things can be done at scale."

And being environmentally friendly seems compatible with sporting success, too. Last year, the club was promoted to the English Football League, the fourth tier, for the first time in its 129-year history.