$160B damage caused by global natural disaster in 2018 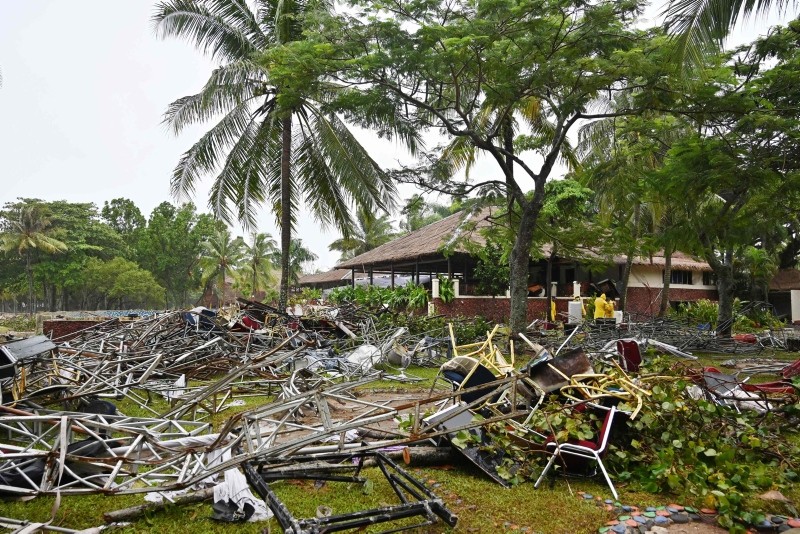 This picture taken on December 26, 2018 shows the area where the Seventeen pop band was playing when the tsunami hit the west coast of Indonesia's Java island (AFP File Photo)
by Jan 08, 2019 12:00 am

The financial toll was far below the $350 billion recorded the previous year in a record hurricane season, the firm said in its annual reckoning, but above the 30-year average of $140 billion.

As with the previous year, the United States suffered the heaviest losses from disasters globally, with its second record wildfire season in a row. But it was given some respite from damaging storms, with the hurricanes hitting the country in 2018 inflicting far less destruction than in 2017.

Wildfires dealt $24 billion of damage in California, while Hurricanes Florence and Michael accounted for a combined $30 billion.

Just one blaze known as the "Camp Fire" killed 86 people and caused losses of $16.5 billion in early November as it tore through the foothills of the Sierra Nevada.

As losses from wildfires have grown in step with increasingly frequent hot and dry summers, "many scientists see a link between these developments and advancing climate change," said Ernst Rauch, Munich Re's head of climate and geosciences.

What's more, "burgeoning settlements in areas close to forests at risk from wildfire" mean that "casualties and losses are immense," he added.

Munich Re board member Torsten Jeworrek warned that "action is urgently needed on building codes and land use" to limit wildfire losses.

Looking to the human cost of catastrophes, the financial firm said the deadliest event was a Sept. 28 tsunami that hit the Indonesian city of Palu, killing 2,100 people.

Munich Re highlighted that 2018's natural disaster death toll was far below the 53,000 average for the previous 30 years.

"From a global perspective, measures to protect human life are starting to take effect," the Bavarian company said.

Jebi, just one of seven typhoons to strike Japan, dealt $12.5 billion in damage.

Beyond the hurricanes, a second tsunami that struck the Indonesian islands of Sumatra and Java in December killed "at least" 400.

The tidal wave went undetected by early warning systems as it was caused by an underwater landslide rather than an earthquake.

Europe was spared dramatic one-off disasters in 2018, but a long summer drought inflicted around $3.9 billion in direct losses to arable and livestock farmers and slowed economies as rivers ebbed too low to be used for freight traffic.

The dry summer also contributed to violent wildfires in Scandinavia.