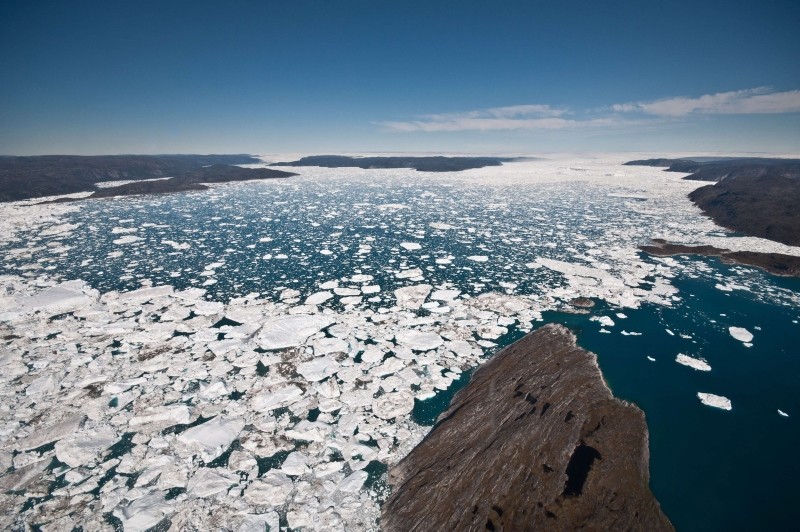 Billions of tonnes of meltwater flowing into the world's oceans from the Greenland and Antarctic ice sheets could boost extreme weather and destabilise regional climate within a matter of decades, researchers said Wednesday.

These melting giants, especially the one atop Greenland, are poised to further weaken the ocean currents that move cold water south along the Atlantic Ocean floor while pushing tropical waters northward closer to the surface, they reported in the journal Nature.

Known as the Atlantic Meridional Overturning Circulation (AMOC), this liquid conveyor belt plays a crucial role in Earth's climate system and helps ensures the relative warmth of the Northern Hemisphere.

"According to our models, this meltwater will cause significant disruptions to ocean currents and change levels of warming around the world," said lead author Nicholas Golledge, an associate professor at the Antarctic Research Centre of New Zealand's Victoria University of Wellington.

The Antarctic ice sheet's loss of mass, meanwhile, traps warmer water below the surface, eroding glaciers from underneath in a vicious circle of accelerated melting that contributes to sea level rise.

Most studies on ice sheets have focused on how quickly they might shrink due to global warming, and how much global temperatures can rise before their disintegration -- whether over centuries or millenia -- becomes inevitable, a threshold known as a "tipping point."

But far less research has been done on how the meltwater might affect the climate system itself.

"The large-scale changes we see in our simulations are conducive to a more chaotic climate with more extreme weather events and more intense and frequent heatwaves," co-author Natalya Gomez, a researcher in the Department of Earth and Planetary Sciences at McGill University in Canada, told AFP.

"By mid-century," the researchers concluded, "meltwater from the Greenland ice sheet noticeably disrupts the AMOC," which has already shown signs of slowing down.

This is a "much shorter timescale than expected," commented Helene Seroussi, a researcher in the Sea Level and Ice Group at the Jet Propulsion Laboratory in California, who was not involved in the study.

The findings were based on highly detailed simulations combined with satellite observations of changes to the ice sheets since 2010.

One likely result of weakened current in the Atlantic will be warmer air temperatures in the high Arctic, eastern Canada and central America, and cooler temperatures over northwestern Europe and the North American eastern seaboard.

The Antarctic and Greenland ice sheets, up to three kilometres (1.8 miles) thick, contain more than two-thirds of the planet's fresh water, enough to raise global oceans 58 and seven metres (190 and 22 feet), respectively, were they to melt completely.

Besides Greenland, the regions most vulnerable to global warming are West Antarctica and several huge glaciers in East Antarctica, which is far larger and more stable.

In a second study published Wednesday in Nature, some of the same scientists offered new projections of how much Antarctica will contribute to sea level rise by 2100 -- a hotly debated topic.

A controversial 2016 study suggested the continent's ice cliffs -- exposed by the disintegration of ice shelves that jut out from glaciers over ocean water -- were highly vulnerable to collapse, and could lead to sea level rise of a metre by century's end.

That would be enough to displace up to 187 million people around the world, especially in populous low-lying river deltas in Asia and Africa, research has shown.

But the new study challenges those findings.

"Unstable ice-cliffs were proposed as a cause of unstoppable collapse of large parts of the ice sheet," said lead author Tamsin Edwards, a lecturer in geography at King's College London.

"But we've re-analysed the data and found this isn't the case."

Both of the news studies, Edwards told AFP, "predict a most likely Antarctic contribution of 15 centimetres" by 2100, with an upward limit of about 40 cm.

A special report on oceans by the UN's Intergovernmental Panel on Climate Change (IPCC), due out in September, will offer a much anticipated estimate of sea level rise.

The IPCC's last major assessment in 2013 did not take ice sheets -- today seen as the major contributor, ahead of thermal expansion and glaciers -- into account for lack of data.