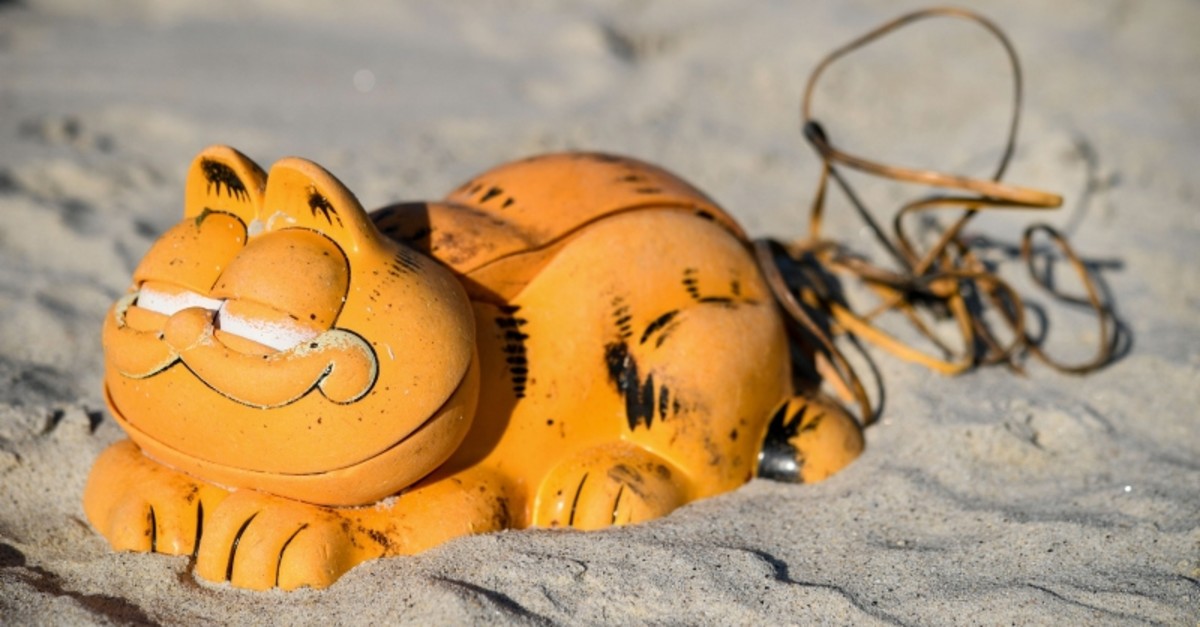 A plastic 'Garfield' phone is displayed on the beach on March 28, 2019 in Plouarzel, western France, after being collected from a sea cave by environmental activists. (AFP Photo)
by Mar 29, 2019 12:00 am

For more than 30 years bright orange "Garfield" phones have been washing up on the French coast to the bemusement of local beach cleaners, who have finally cracked the mystery behind them.

Locals had long suspected a lost shipping container was to blame for the novelty landline phones, modeled on the prickly feline cartoon character, which have plagued the northern Finistere beaches for decades.

"Our association has existed for 18 years and in that time we have found pieces of Garfield telephones almost every time we clean," said Claire Simonin, head of the beach cleaning group Ar Viltansou in Brittany.

But it wasn't until a local resident revealed that he had discovered the container after a storm in the 1980s that they were finally able to locate it -- wedged in a partially submerged cave only accessible at low tide.

"He told us where it was... it was very, very dangerous," Simonin told AFP after an expedition to track it down.

"We found this incredible fissure that is 30 meters (100 feet) deep and at the very bottom, there were the remains of a container."

"Under the boulders in front of the entrance, we found 23 complete handsets with electronics and wires. They were everywhere," she added.

But the mystery, first reported by the France Info public broadcaster, is not fully solved.

"We have no idea what happened at the time: we do not know where it came from, what boat," said Fabien Boileau, director of the Iroise Marine Nature Park in Finistere.

"And we don't know if several containers fell into the water, or only one."

The dry-witted Garfield first dreamed up by illustrator Jim Davis in the late 1970s, has since spawned a television show, a film series starring Bill Murray as the voice of the titular cat, and a merchandising empire worth hundreds of millions of dollars annually.

The "Garfield" phone discoveries in France, however, highlight the problem of plastic in the oceans, campaigners say.

"Seeing these plastic phones on the beaches, especially so long after the incident, is a stark reminder of the persistence of plastic waste in the ocean," Jo Ruxton, co-founder of Plastic Oceans Foundation, told AFP.

"Plastic was designed not to break down and large items like these being hardly weathered after 30-40 years is a clear indication of this," she added.

The world currently produces more than 300 million tonnes of plastics annually, and there are at least 5 trillion plastic pieces floating in our oceans, scientists have estimated.

Some forecasts predict that there will be more plastic in the seas than fish by 2050.

But lost shipping containers -- of which there were 1,390 in 2017, according to the World Shipping Council -- account for a small proportion of the pollution compared with the packaging industry.

"Phones typically don't end up in the sea," said Jocelyn Bleriot of the Ellen MacArthur Foundation, a British charity that focuses on reducing waste.

Even animals living in the deepest ocean trenches have been found with fragments of plastic in their gut, according to new research published in February showing how the scourge reached into the bowels of the planet.

Eventually, plastics like the phones "become so weathered that they start to become brittle and break up into ever smaller fragments, attracting harmful chemicals during the process," Ruxton explained.

"Eventually they become so small that they are mistaken for plankton and are eaten by marine animals and become part of the food chain that leads to us."

The long-term impact of plastic on humans is still undetermined, but governments are beginning to take action to stem the levels of plastic that reach the ocean.

The European Parliament this week approved a proposal that would ban the top 10 most common single-use plastic products in Europe by 2021.